After attending Formula D all weekend at Road Atlanta I made my way over to Street Wise Drift's first Pro/Am event of the year, and let me tell you, Pro/Am is serious business these days. Last time I went to a Pro/Am event everybody was running 300hp Sr20's with a few random KA's and LS and rotary engines sprinkled about, this is no longer the case, these people want to run in FD after all. I was pretty amazed at what I saw that Sunday hit the jump and be amazed yourself! 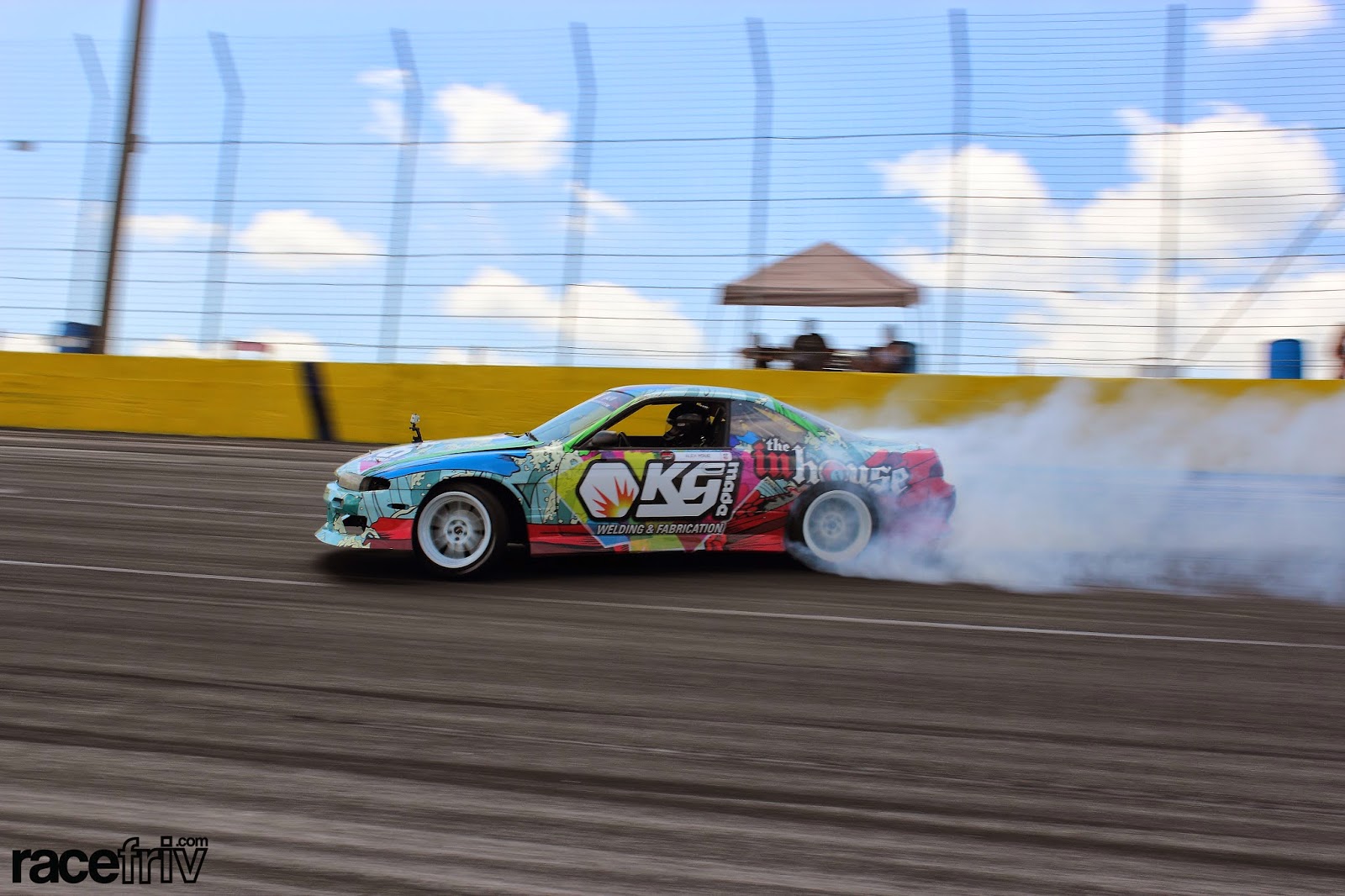 Two long days of FD (which will have a post of soon) was tiring but I made my way over to Gresham Motorsports park to help my bud JJ Alfano for his first drift event in a long time.  JJ's car has been in a never ending process of a LS swap over the past year but with the help of a few people including YAI Racing the motor is running with 480 happy horses. There were a few small things to fix and tweak over the day but the car stayed together and drove it self back on the trailer after about 10 runs on the bank, JJ was pretty mad he didn't qualify but I think any drift event (especially on a car eater course like Gresham) that you can drive the car back on the trailer is a victory. JJ actually did pretty good for his first time drifting in over a year. 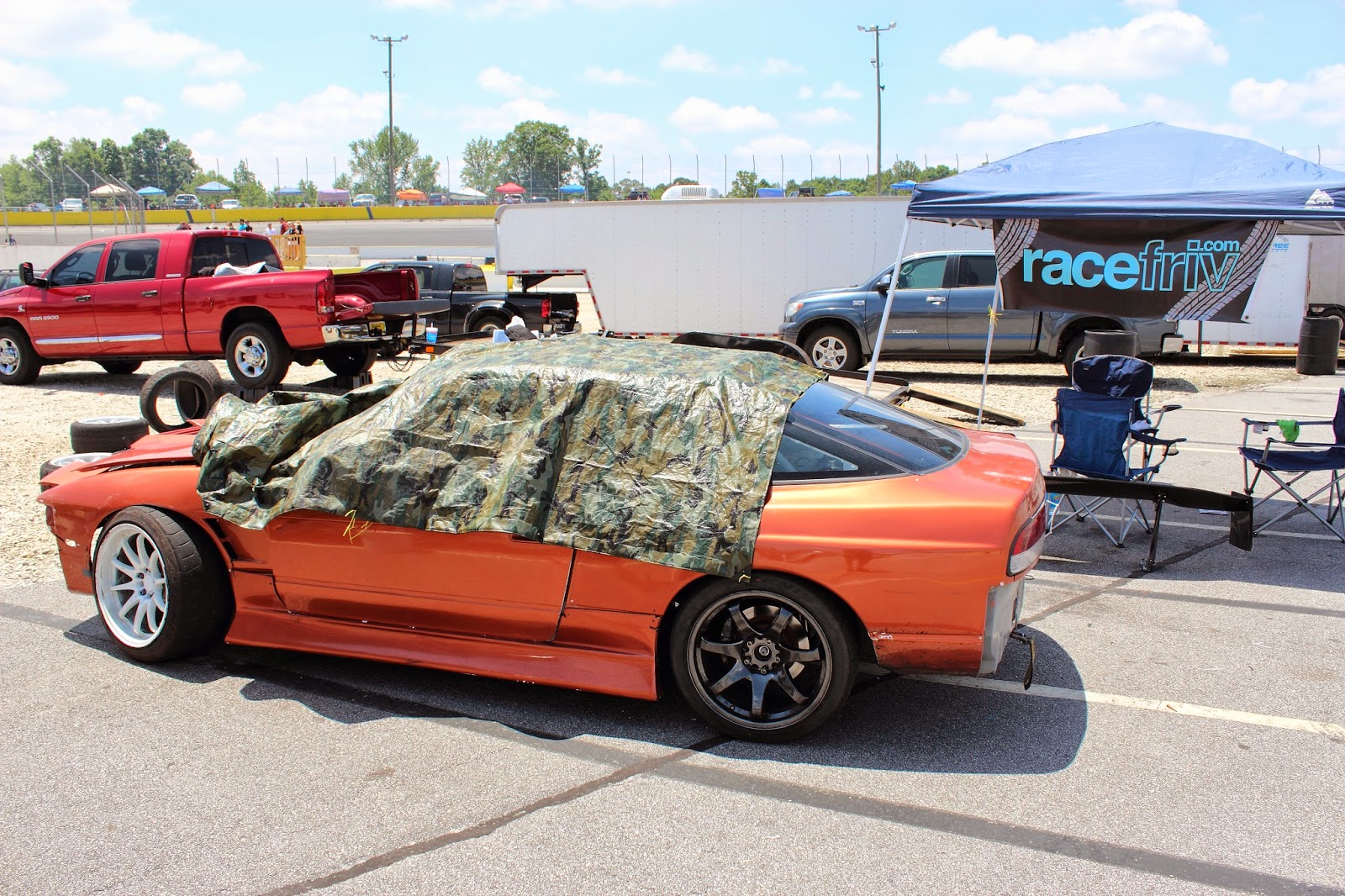 Here's a shot of his car while trying to keep it cool, and before he played kissy with the wall

So moving on to some drifting! 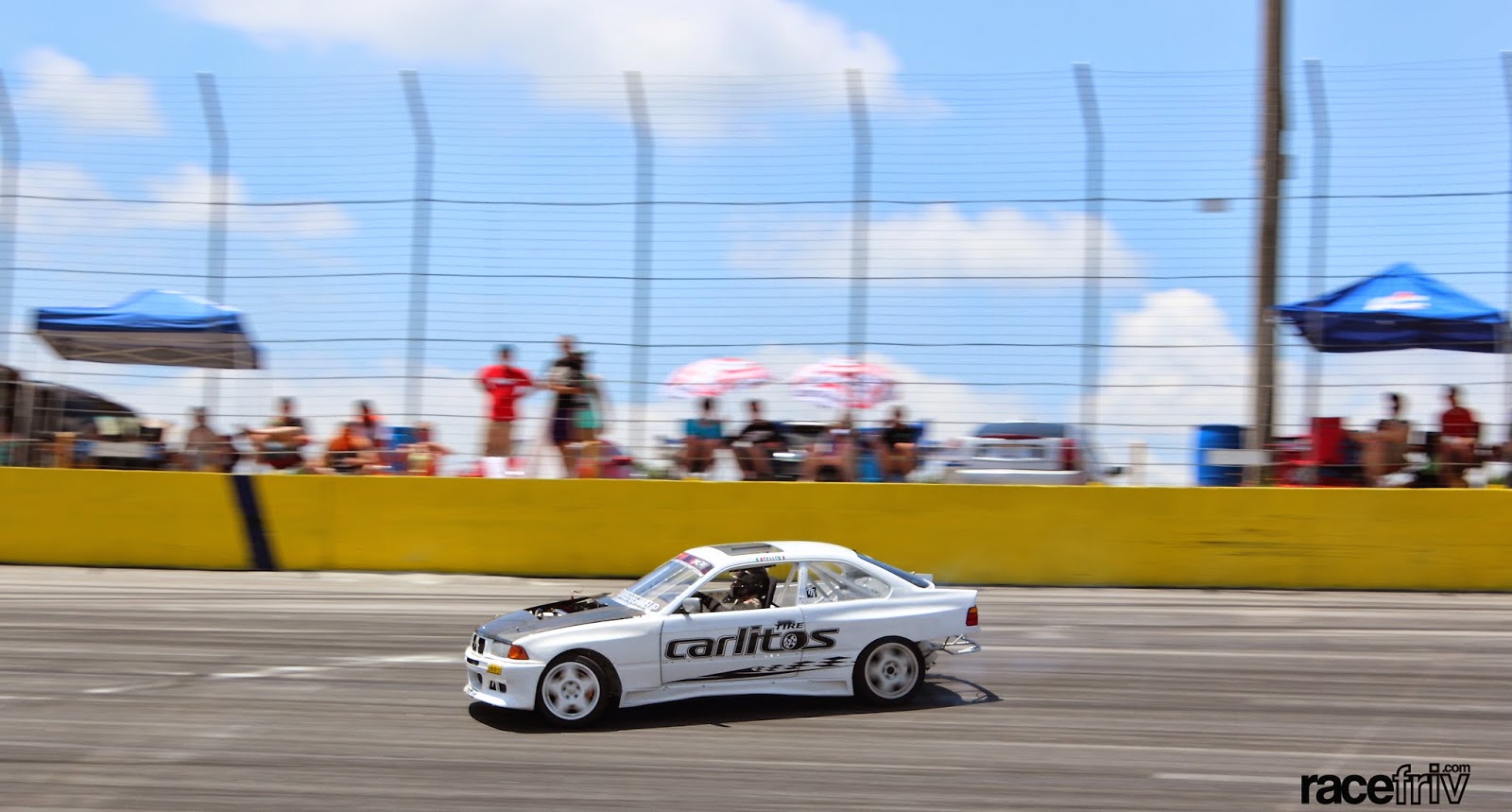 Like I was saying before, Pro/Am is the real deal these days and (in my opinion) Street Wise Drift is the hardest to compete in. All the new guys that seem to do good in FD  right out of the box are mostly from Street Wise Drift. SWD hits multiple real track along with a few banked speedway courses. Compared to places like Vegas Drift that runs the same track every time. Competing in this series requires the most traveling except for USDrift, making it a good preparation to actually going out to FD events. 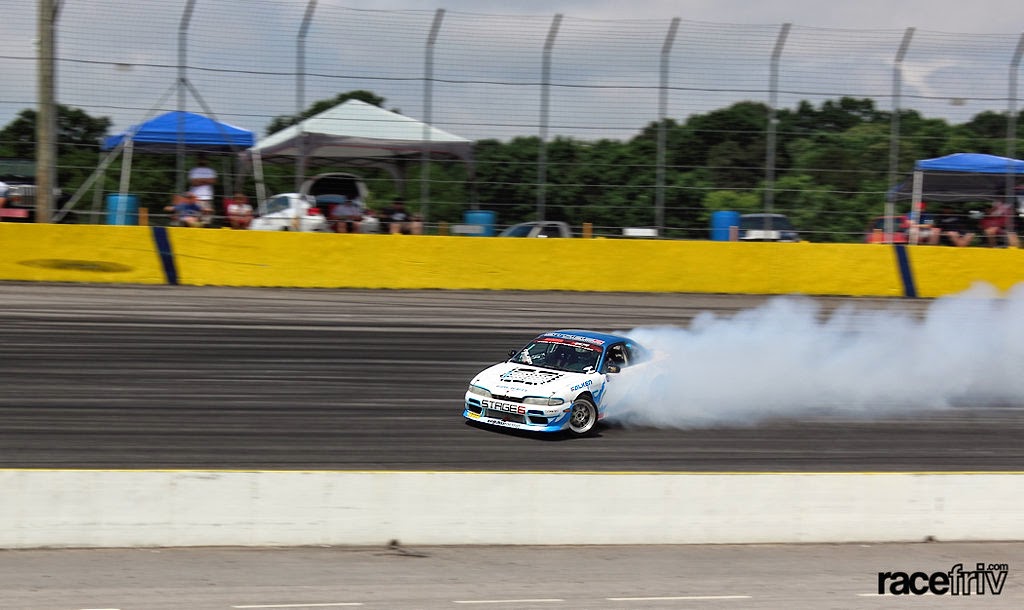 Street Wise also hits some of the hardest courses as well. VIR is fun, but not easy. Road Atlanta which is back this year, it is amazing but still a big FD track and lets not forget Gresham is known for eating cars. 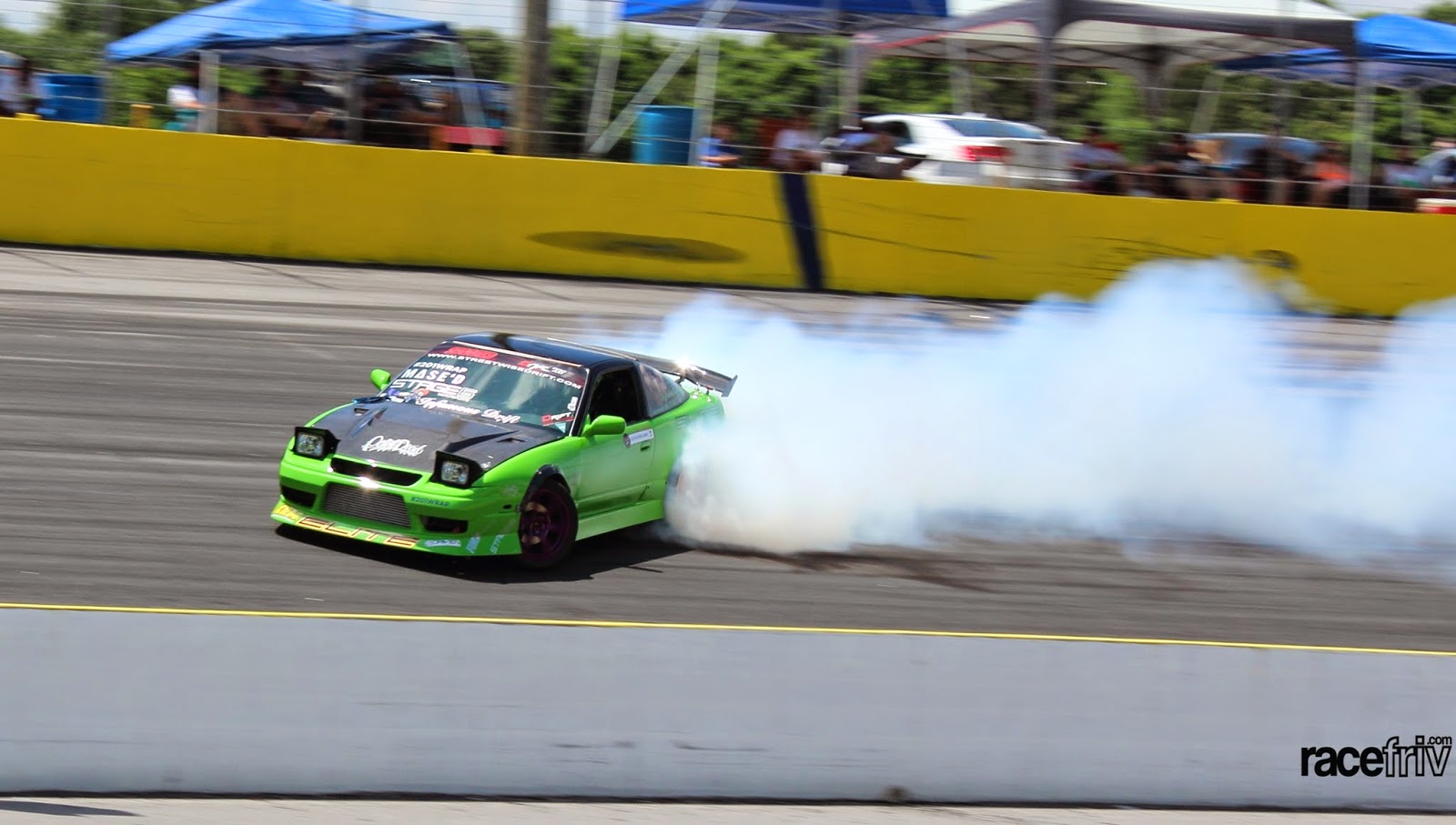 And eat cars it did! I saw multiple cars meet there demise on the banks over the day, JJ left some paint on one wall, without serious damage, unlike some of the other drivers. 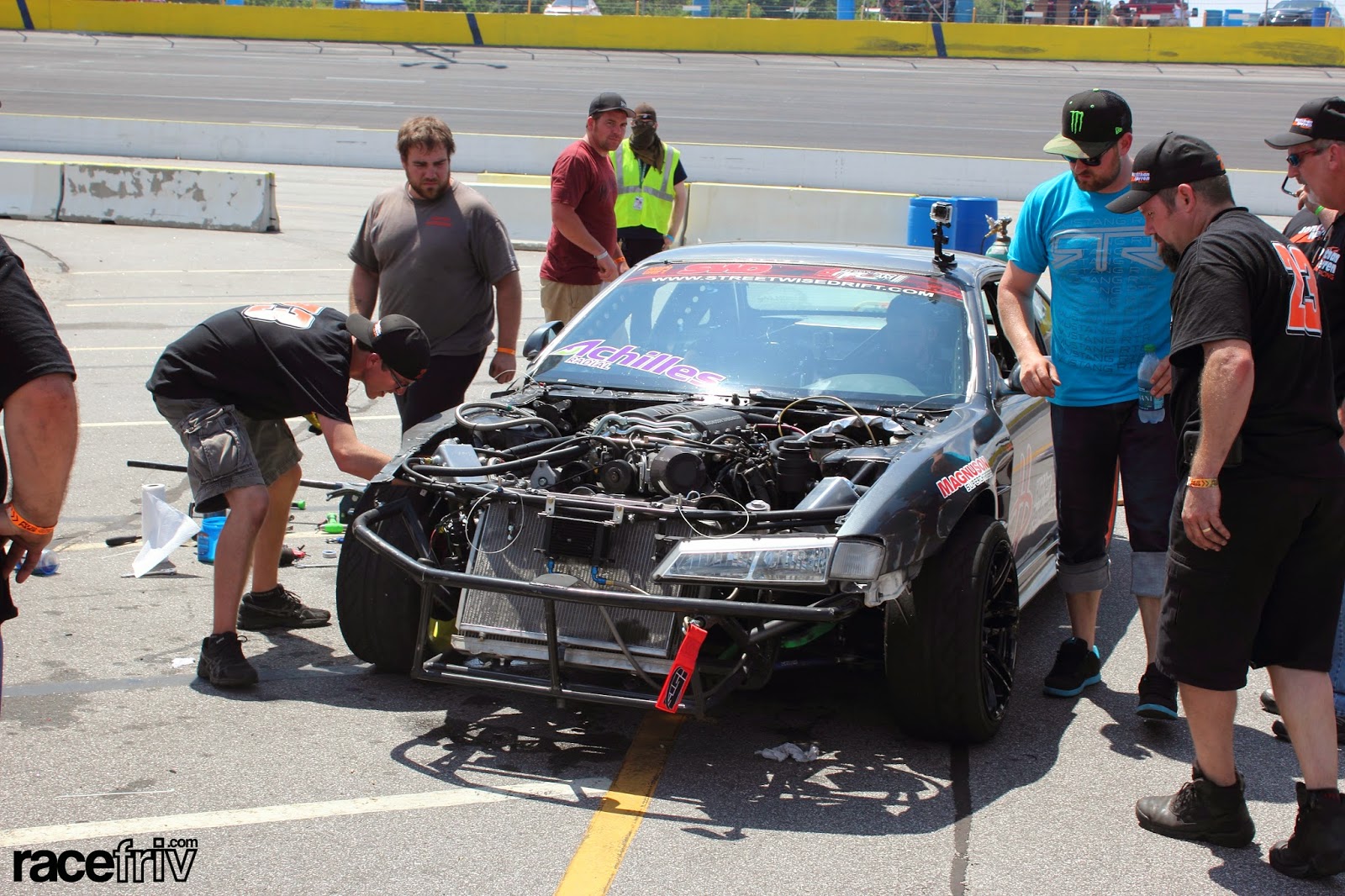 This guy went into the wall hard, and broke just about the entire right side of the car, turns out the guy is from Octane Academy and has a great team backing him up included the guy he works for in FD, Vaughn Gittin Jr, the winner of FDATL over the weekend. Sadly the team didn't make it back out for the day after working on it for hours, though it was fun to watch Vaughn bash things with a hammer in his brand new RTR clothes on a 90 degree day. Say what you want about him but Vaughn loves the sport of drifting.

A few other FD drivers popped by as well, Chelsea Denofa who spots for the only girl competing in Street Wise Drift,  Kelsey Rowlings. And Pat Goodin who is doing quite well this year with his new car from Enjuku. Danny George came along and was a celebrity judge for the event too! Vaughn stopped by our tent for a while to shoot the shit and blow my mind with suspension setup talk for a while. I learned a ton in that small amount of time, it was awesome talking to a real professional. 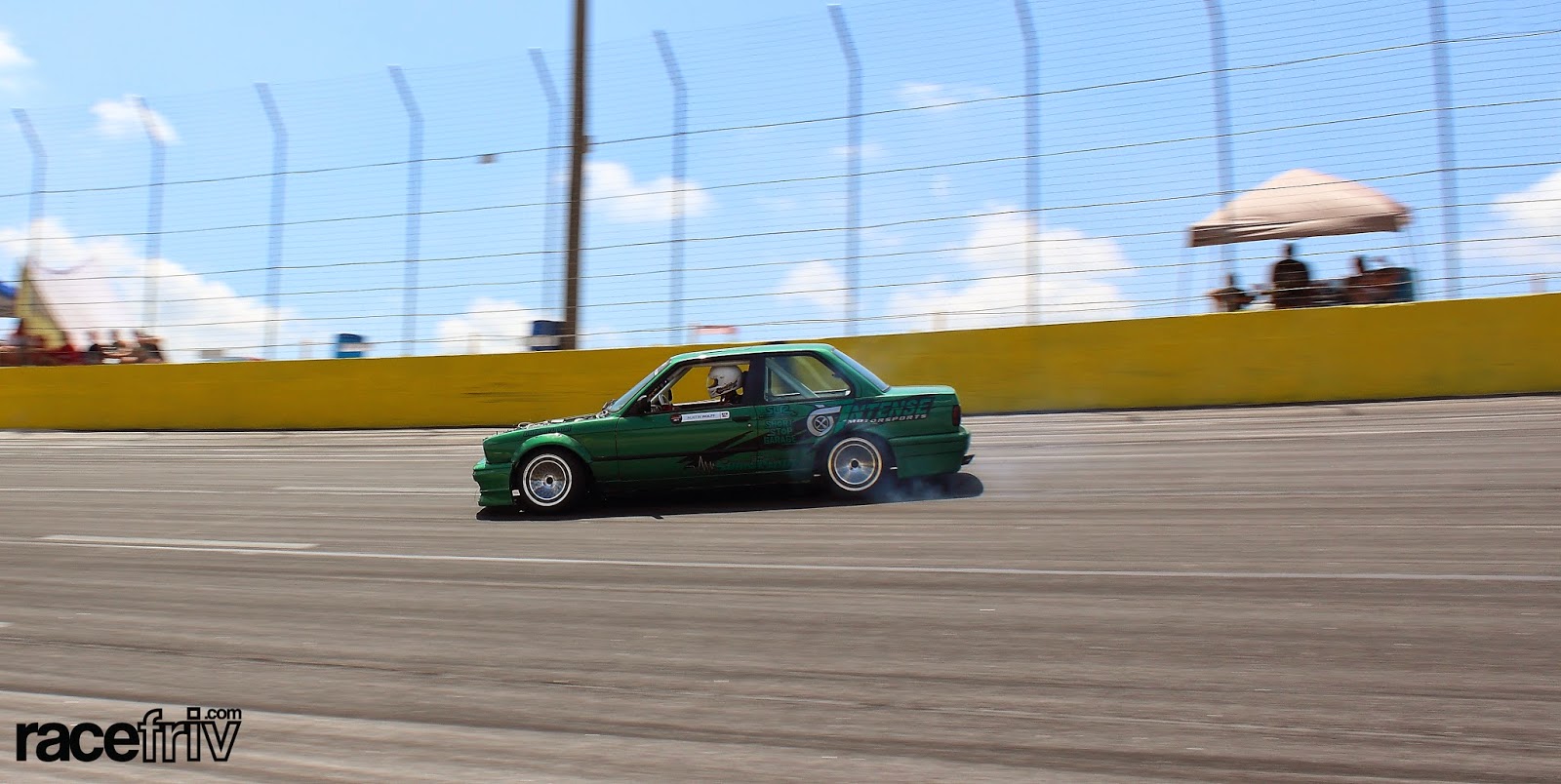 Pro/Am is not for the under powered, Austin Wolf was looking AMAZING in his newly painted E30 but struggled with lack of power. It's got to be hard going up against all the LS swaps not because BMW motors cant make power is just it takes a lot more money to make the same as an LS. Just ask our own racefriv contributor Russel Klem as he drives his own turbo E30. 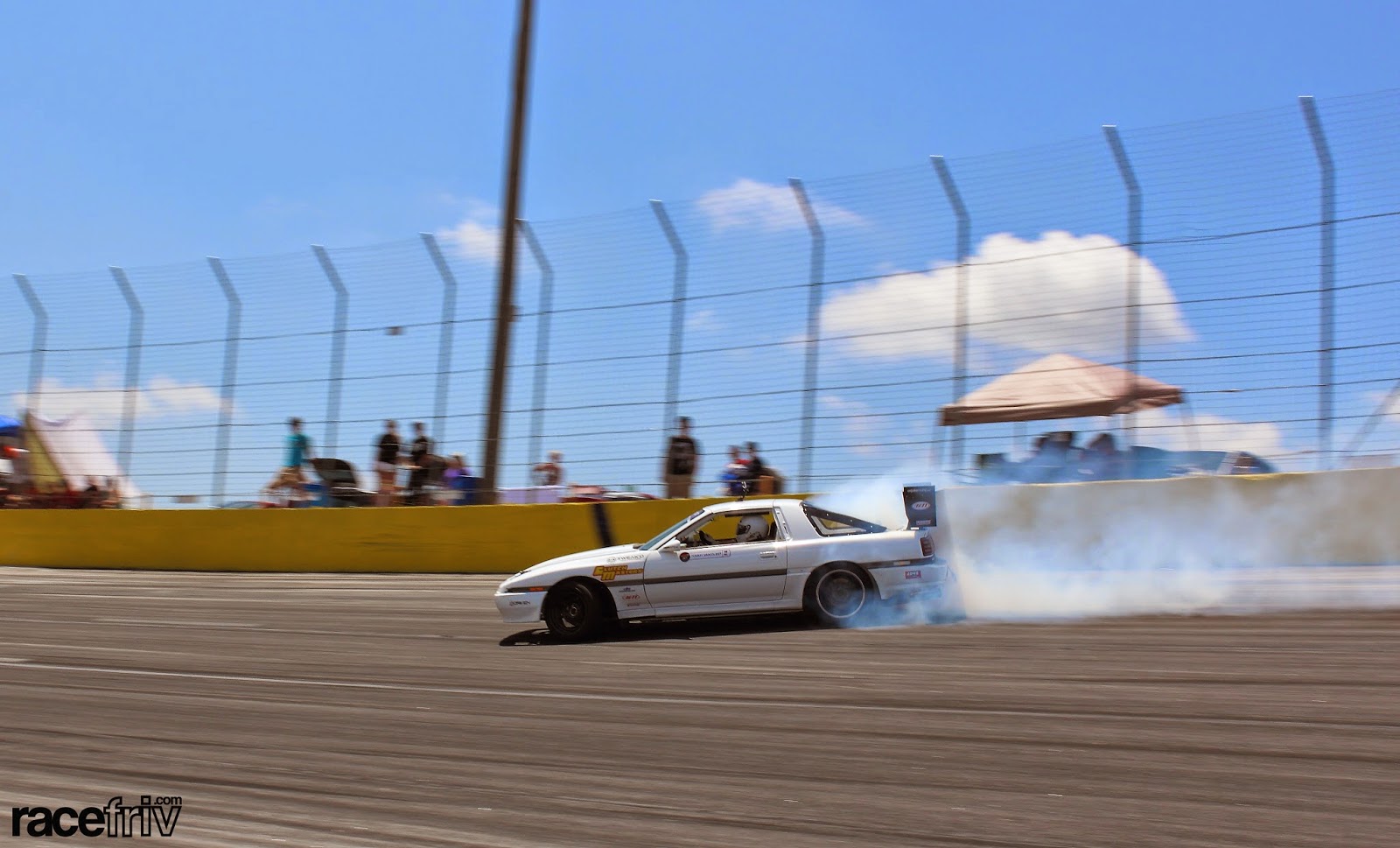 This is Tommy Van Cleef in his 3rd Gen Supra.  It's great to have a variety of cars. 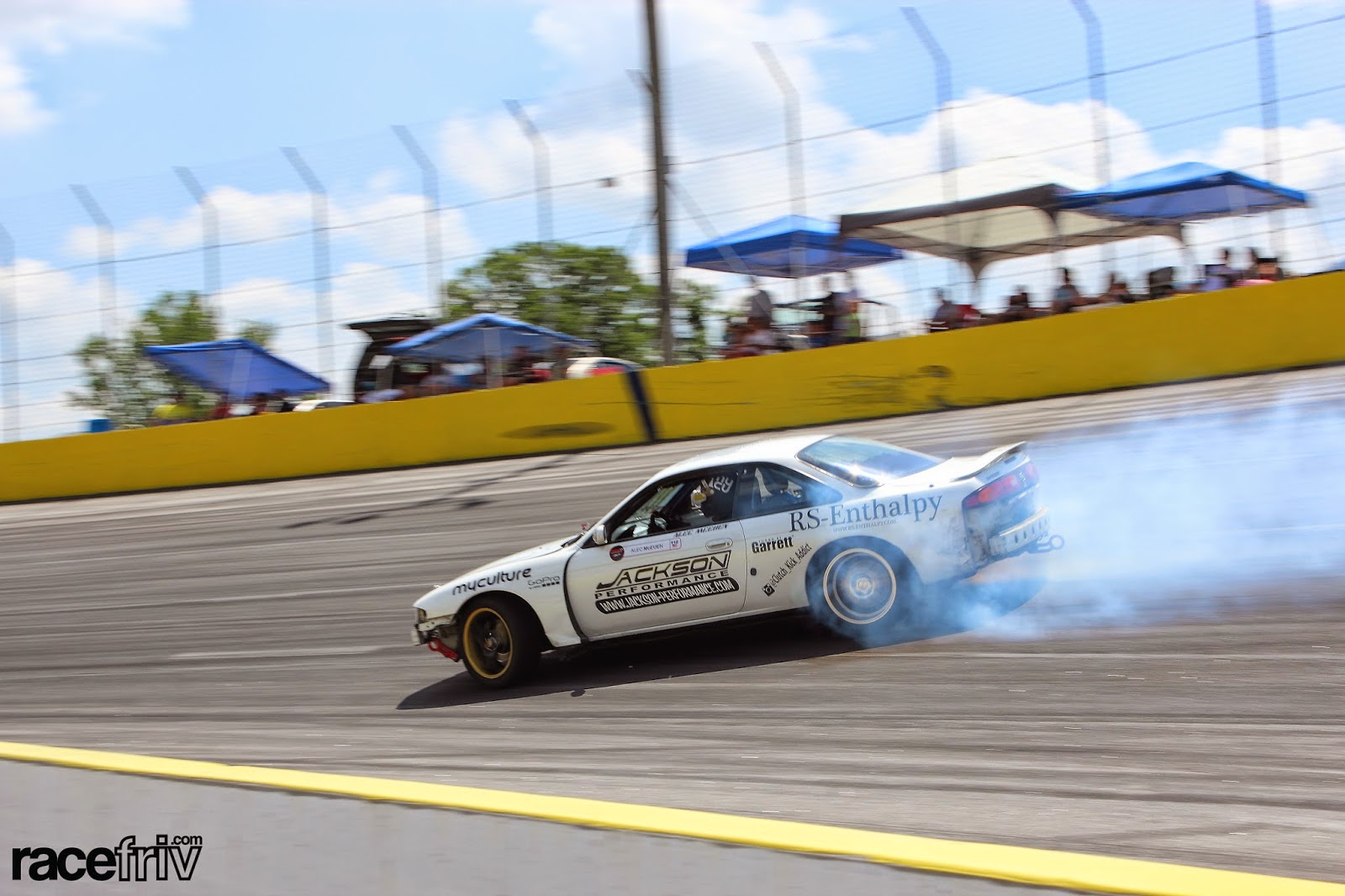 Lots of different approaches to the bank. 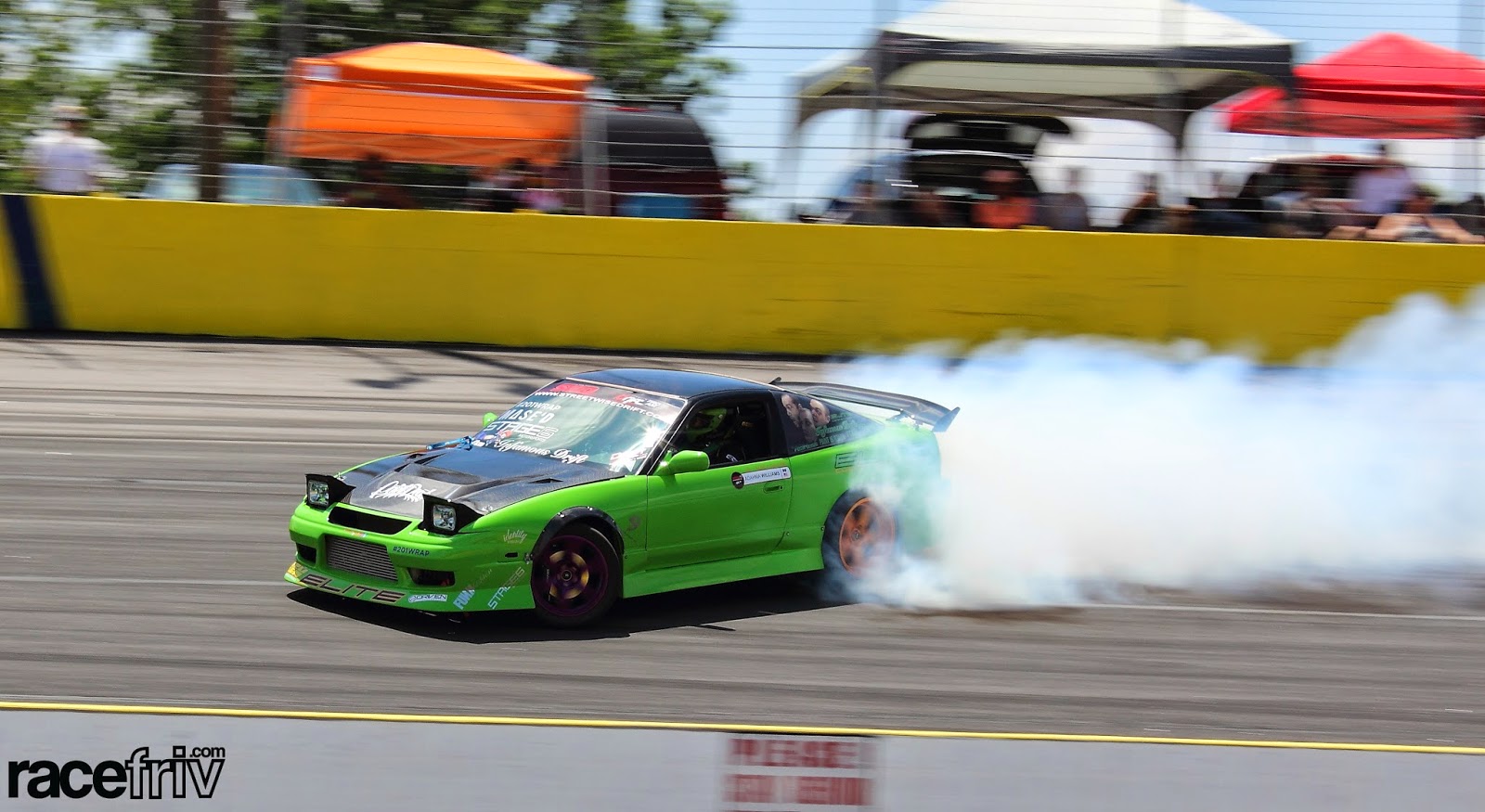 Some early, some late, some shallow 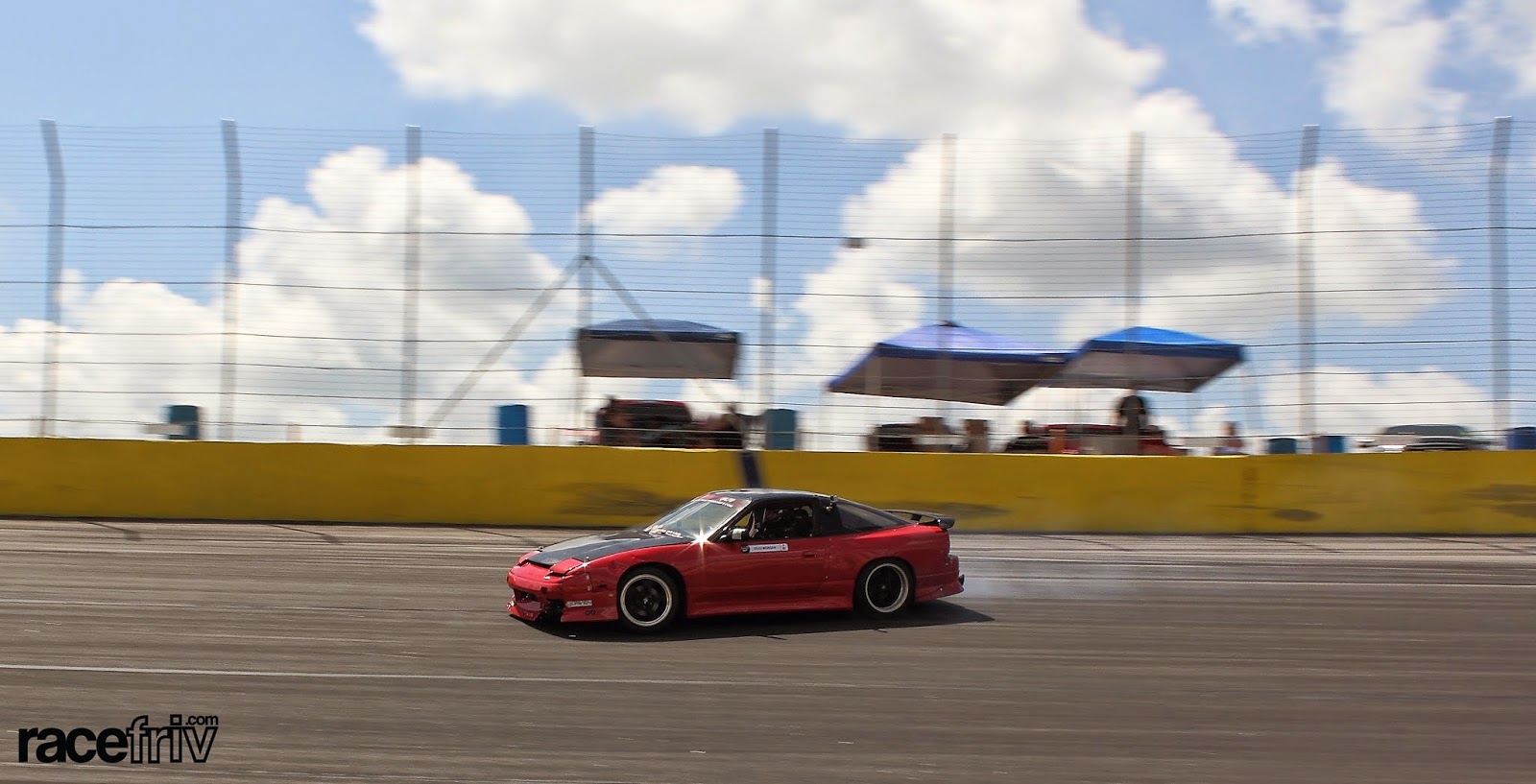 and some towards to the top. It was interesting to see everyone run the bank differently, riding it just right is an art-form. 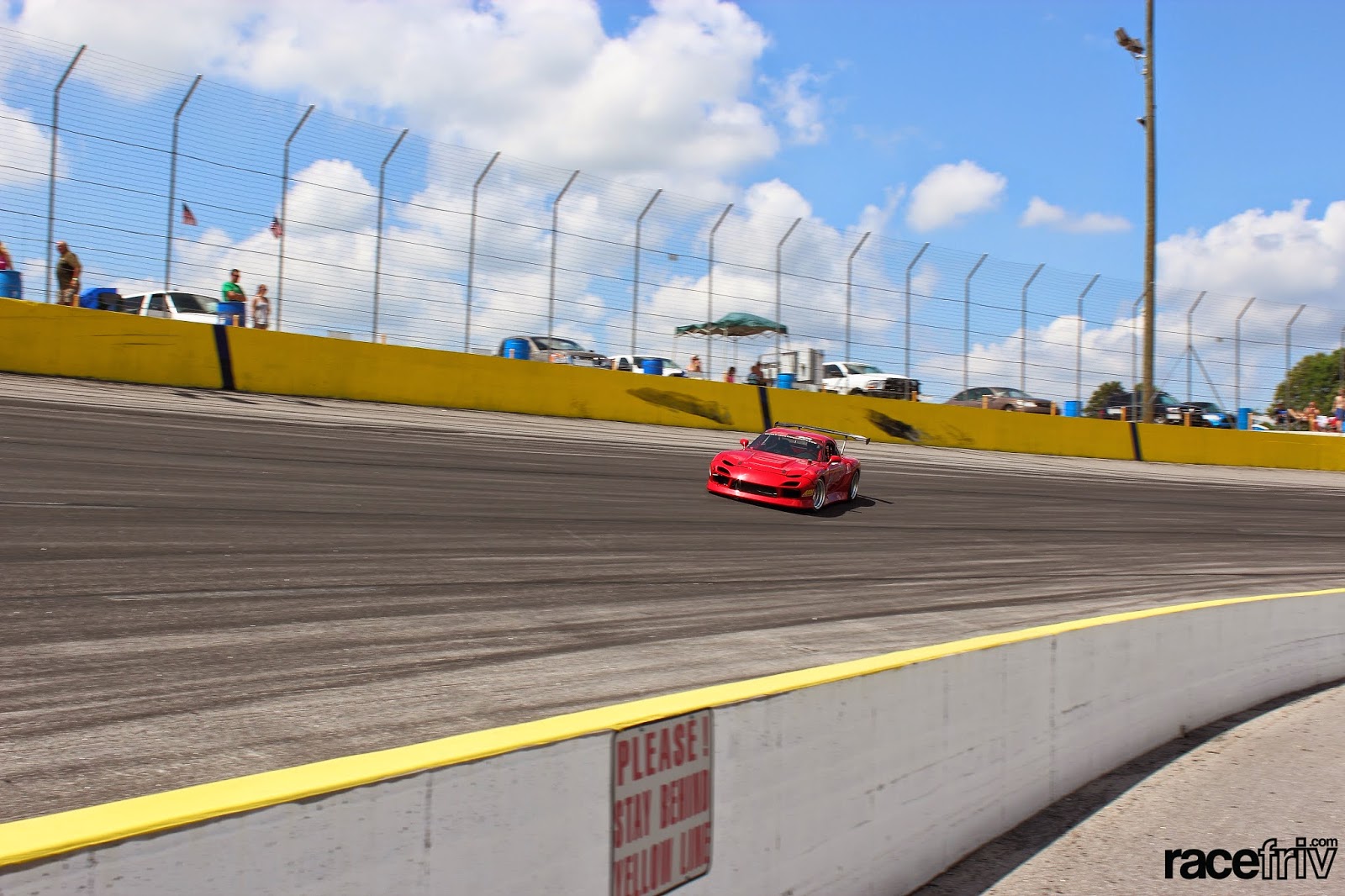 David Campo was out in his beautiful FD RX-7, though it never really ran right. I know early in the day it blew the transmission and they swapped it in the morning. That car is so pretty, David is a damn good driver, the car is setup perfect, it just needs a V8 man! I know keeping a rotary kicks ass, I know the fans love your for it, I know it sounds awesome, but whatever you end up with I hope its reliable. Maybe 2J? either way hope to see out there more the car is sick! 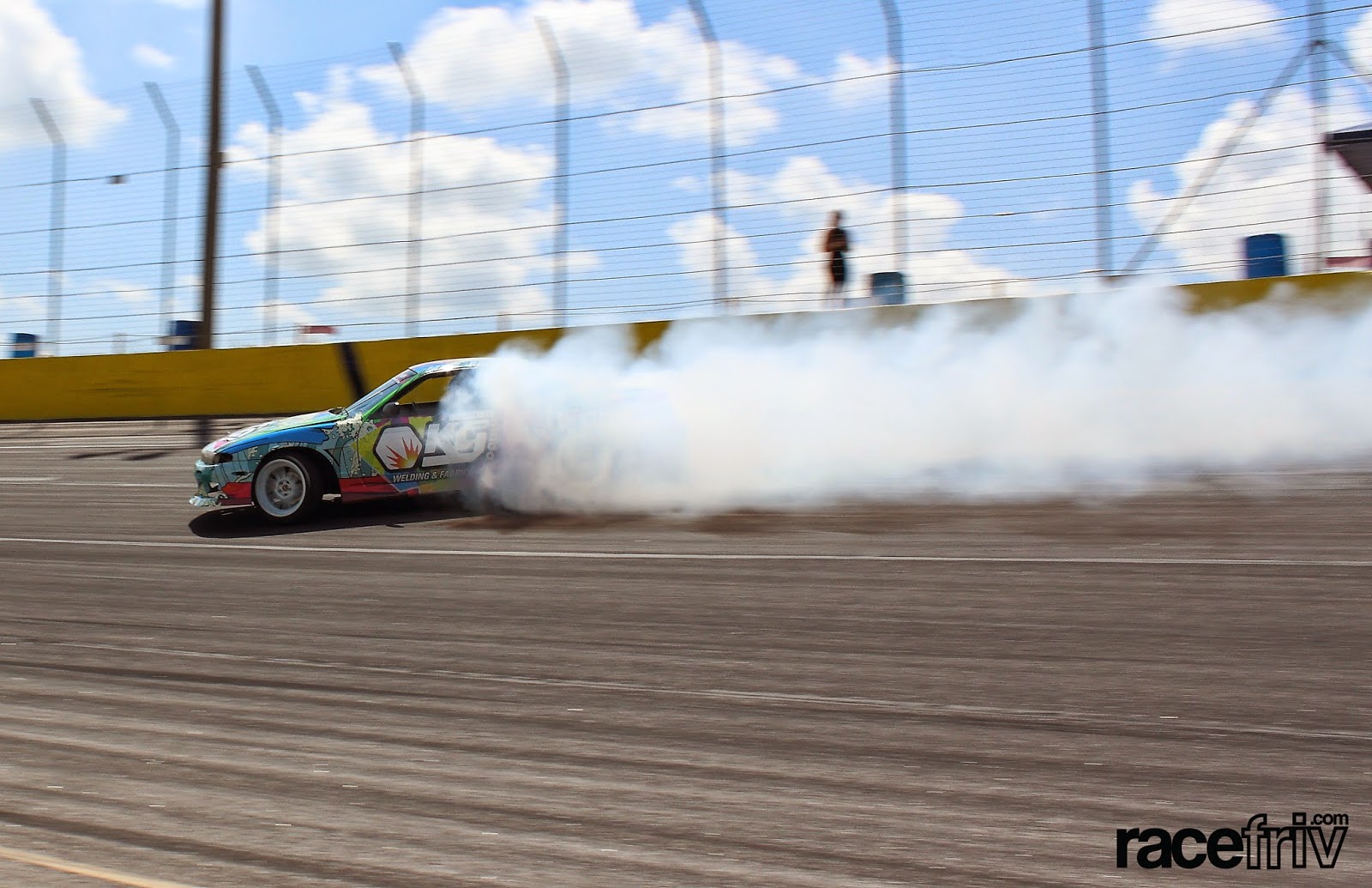 My long time bud Alex Youe was out there with his V8 ruining the bank. Absolute sickness, high and smoke filled, I see a lot of bright things in this guys future. 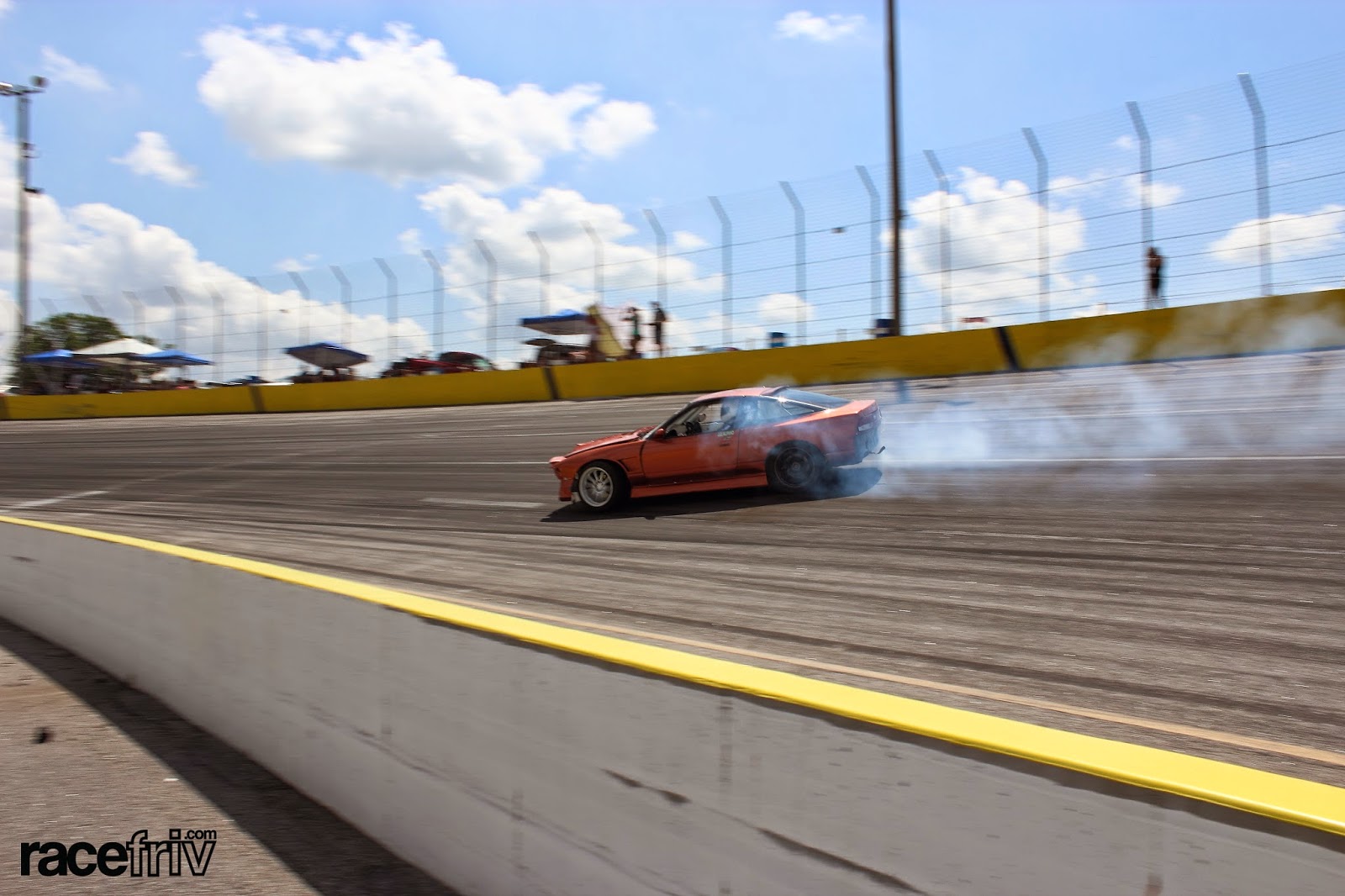 JJ wasn't doing bad either, I have to say even though the man cant turn a wrench he sure can drive. JJ didn't qualify cause he was entering waaaaay earlier than most of the other drivers causing him to run a pretty low line since I think he was in 3rd gear. Grab that 4th man! 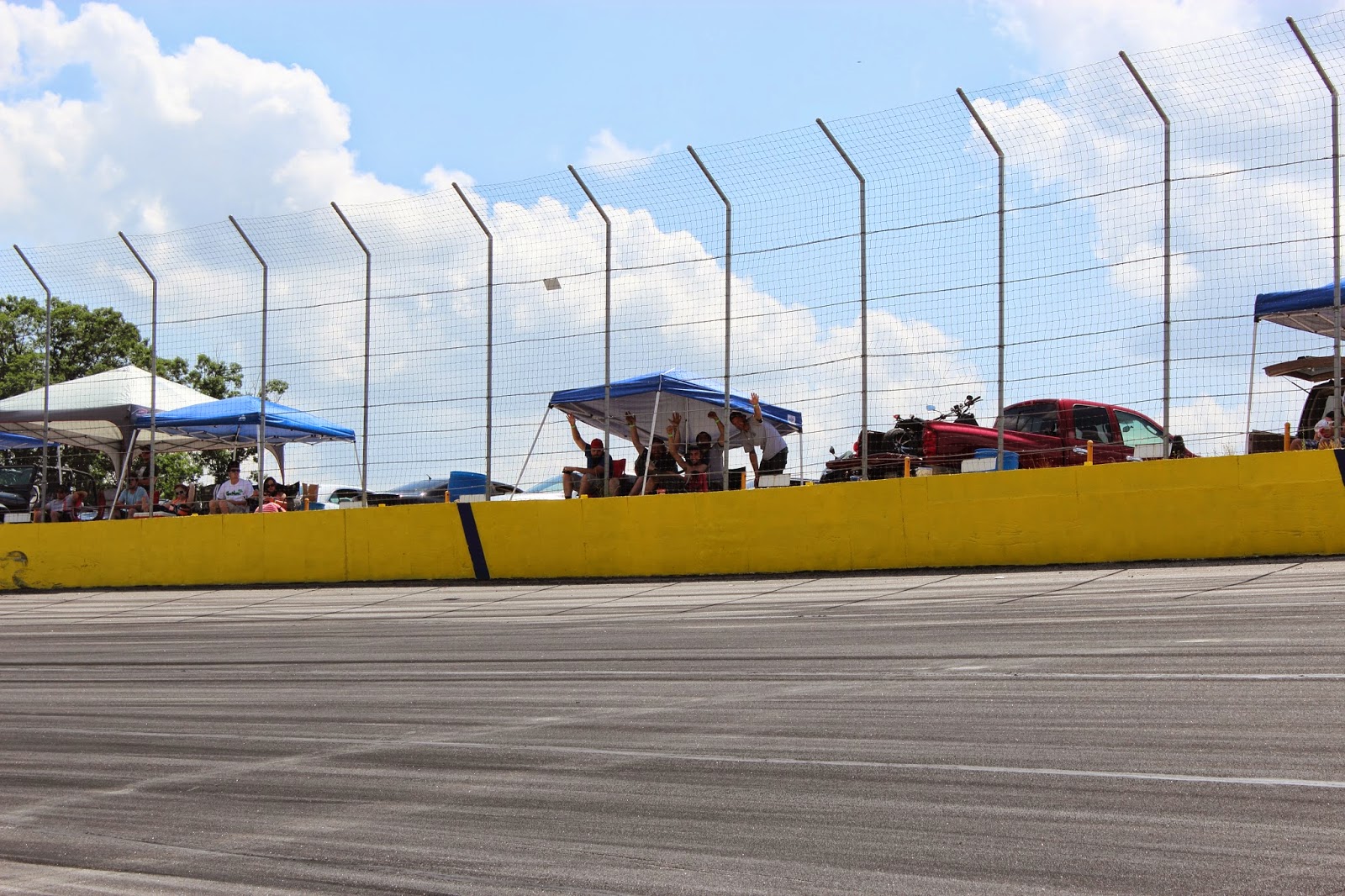 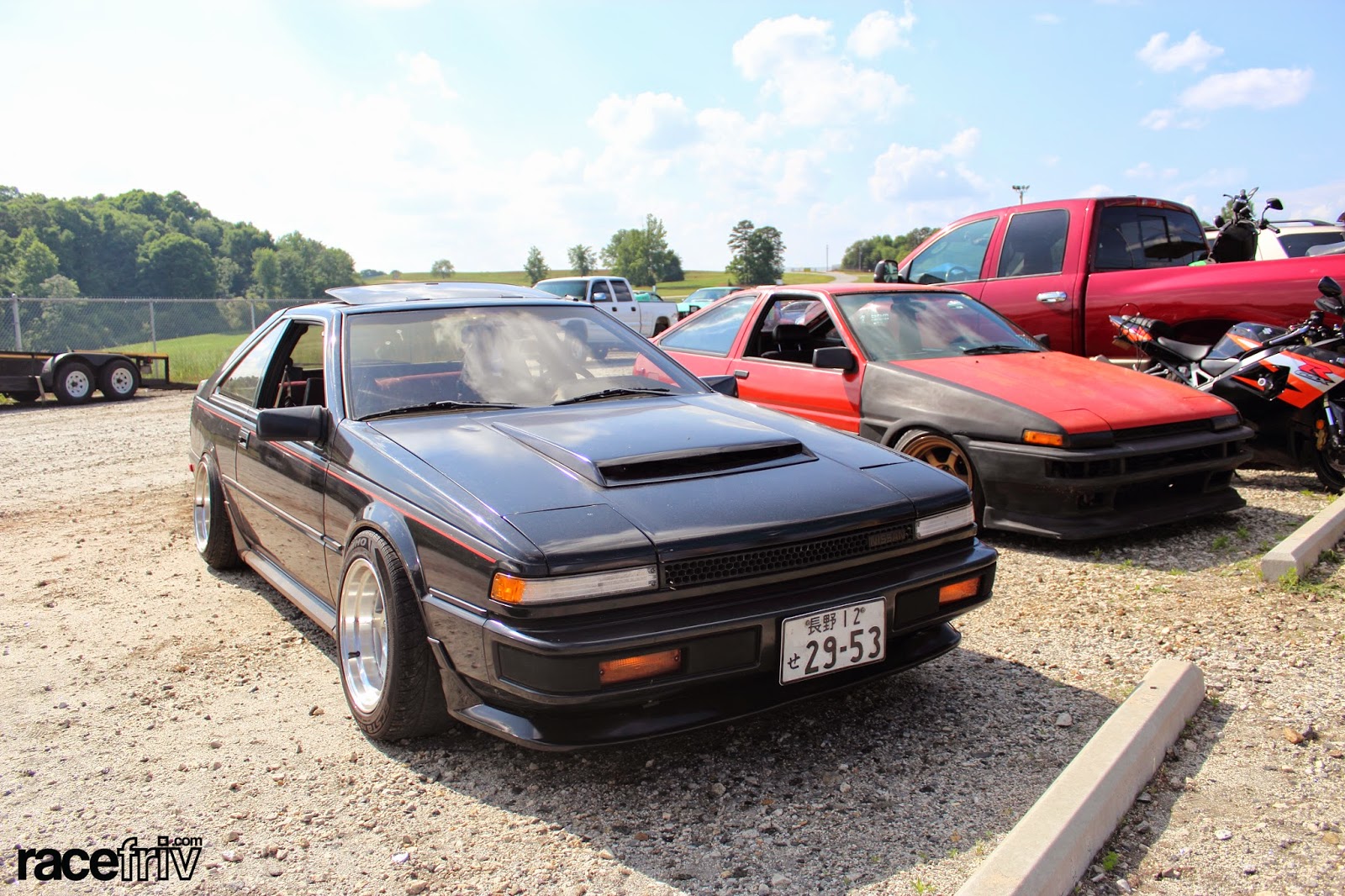 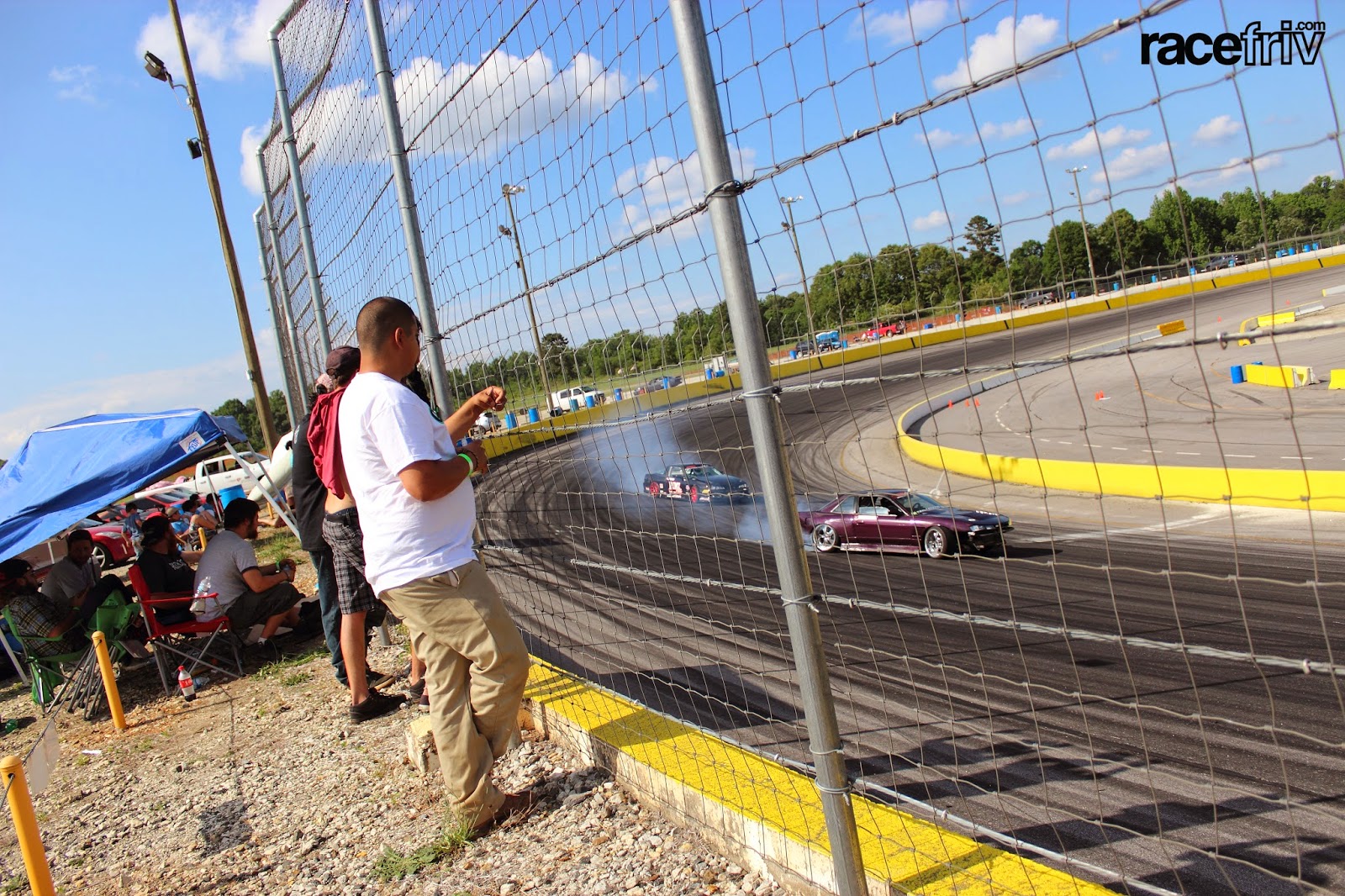 Walking up towards the bank to mingle with some friends I caught the action on the flip side. 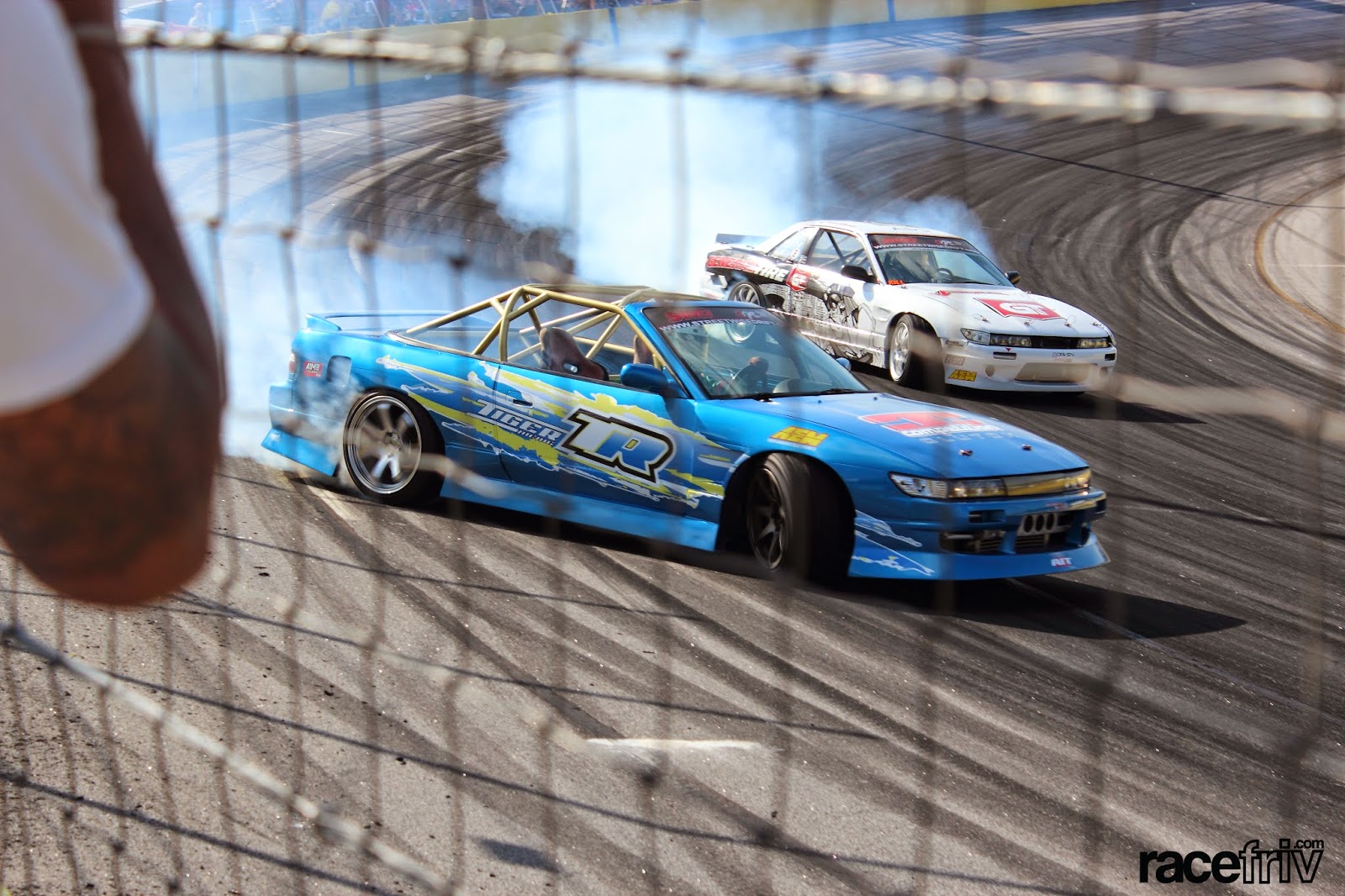 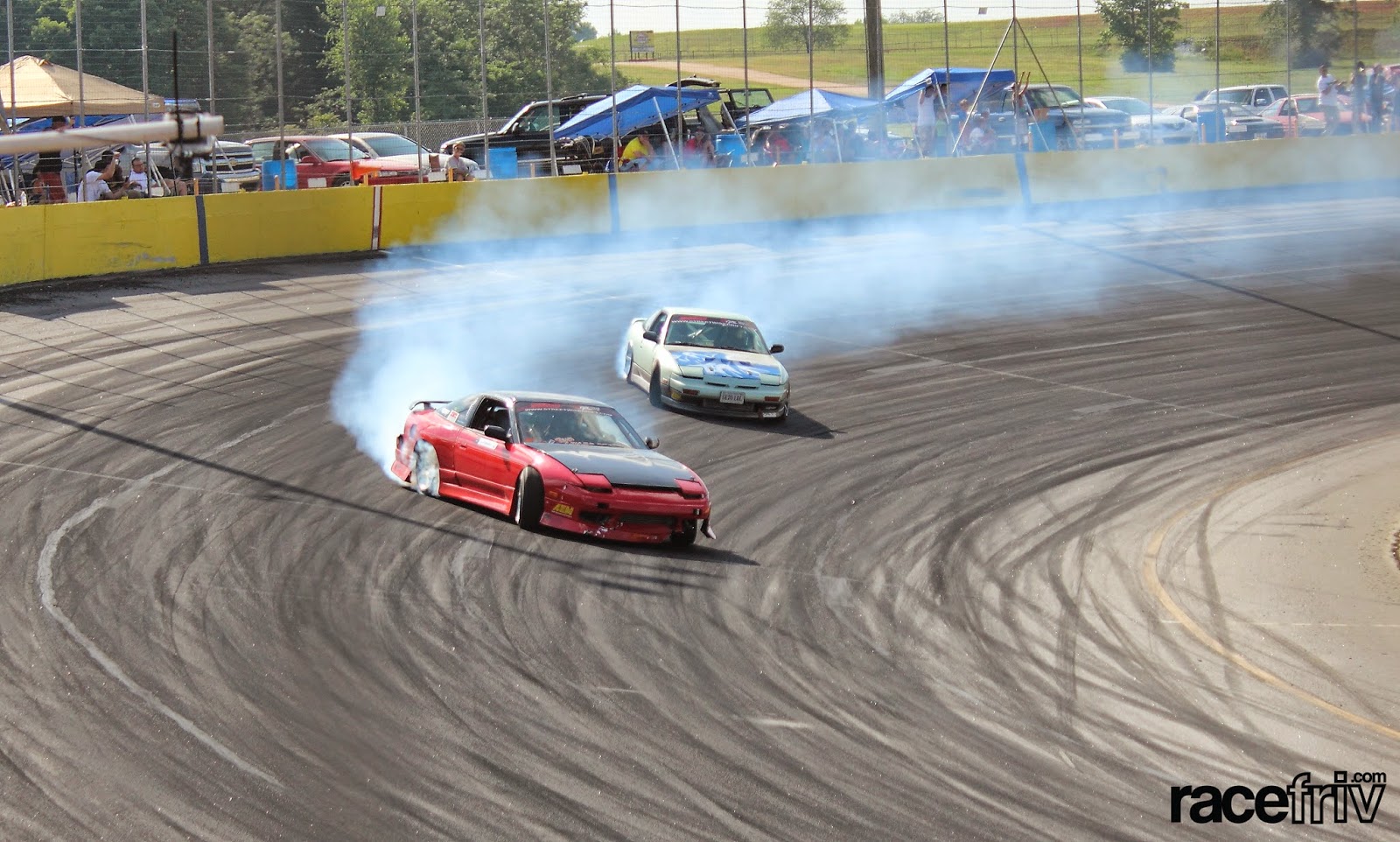 Sean Morgan (red) was the last of the Atlanta drivers to make it up the grid to 5th place, dude has a lot of style and is a veteran of the serious. Best of luck to him! 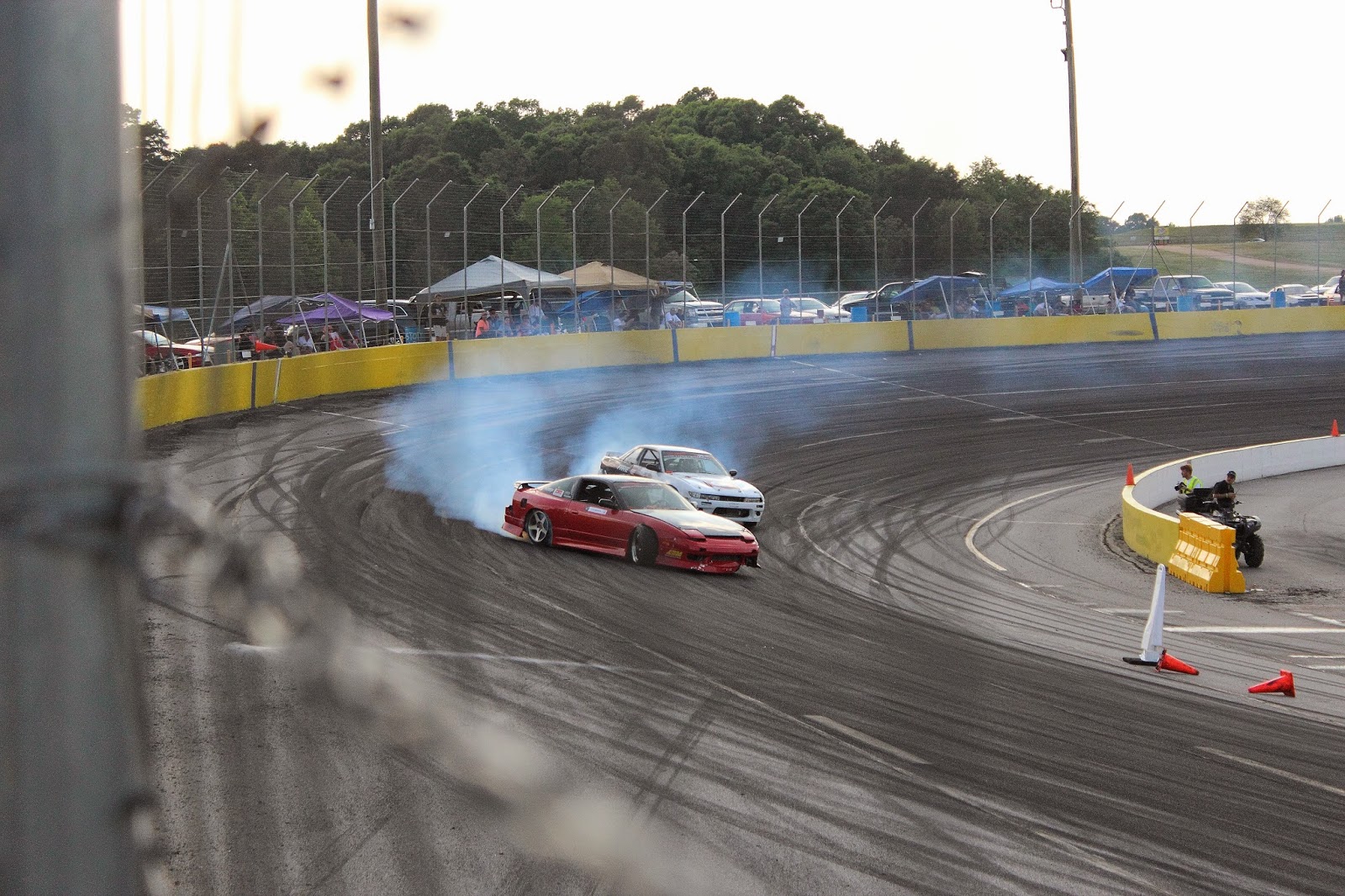 He gave a lot of drivers hell.

I have to say my favorite car of the serious right now is that MKIII supra of Tommy Van Cleef's. Tommy if you read this tell us what your engine setup is in the comments. It is absolutely sick and here is a pretty cool in car video from him at Gresham. I have a thing for Toyota's what can I say? 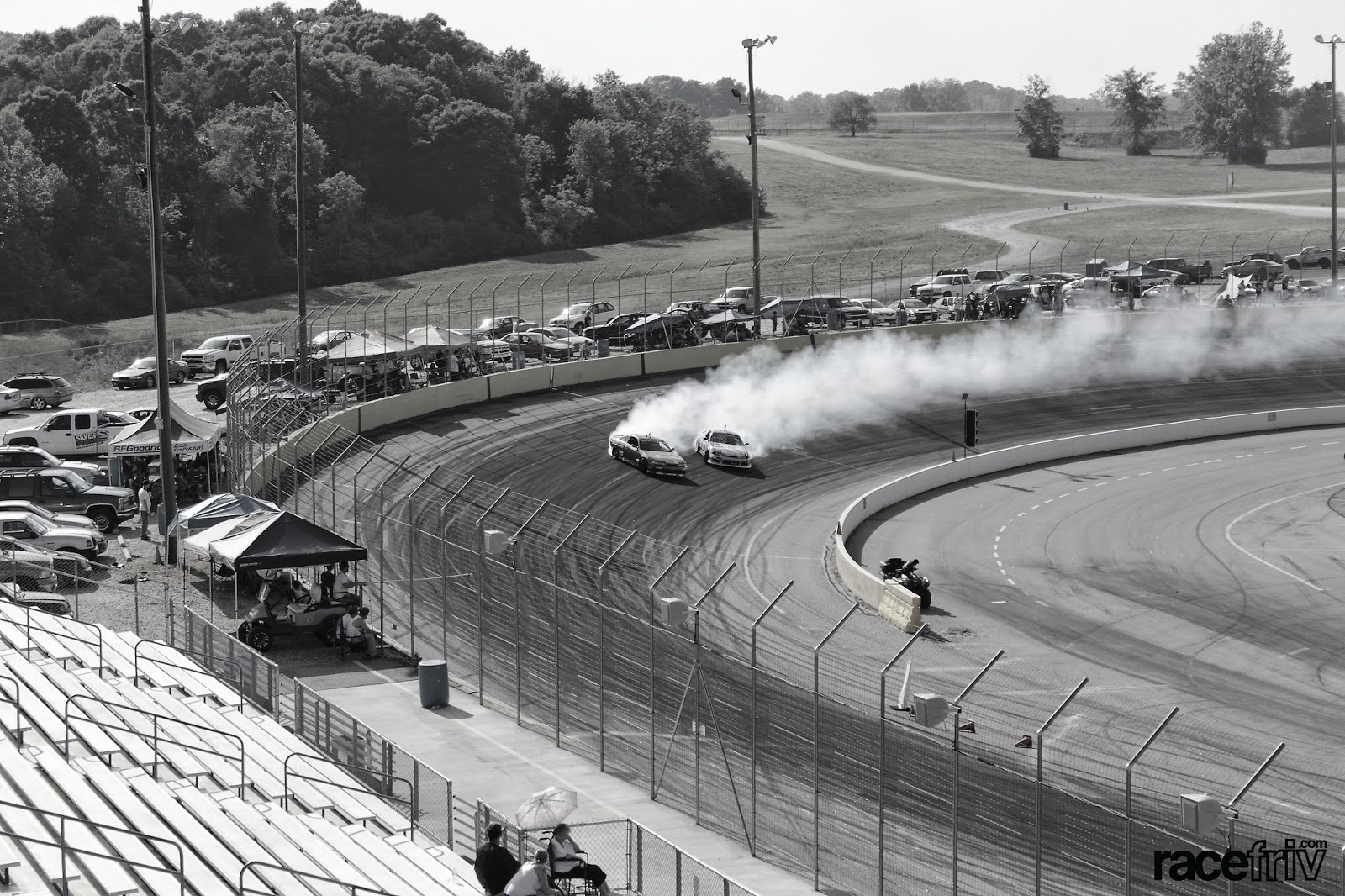 Overall I was totally impressed with series, the competitors and the track itself. Street Wise and Pro/Am in general has really stepped up there game over the past few years and I'm itching to get in the series pretty bad now. Good Luck to all my buds and Atlanta drivers throughout the year, you represent us well!!!