n-dip-i-tee]  noun -
The team Manager and mechanic were milling around the single car when I arrived.  I introduced myself and asked if I could hang out if I didn't get in the way. 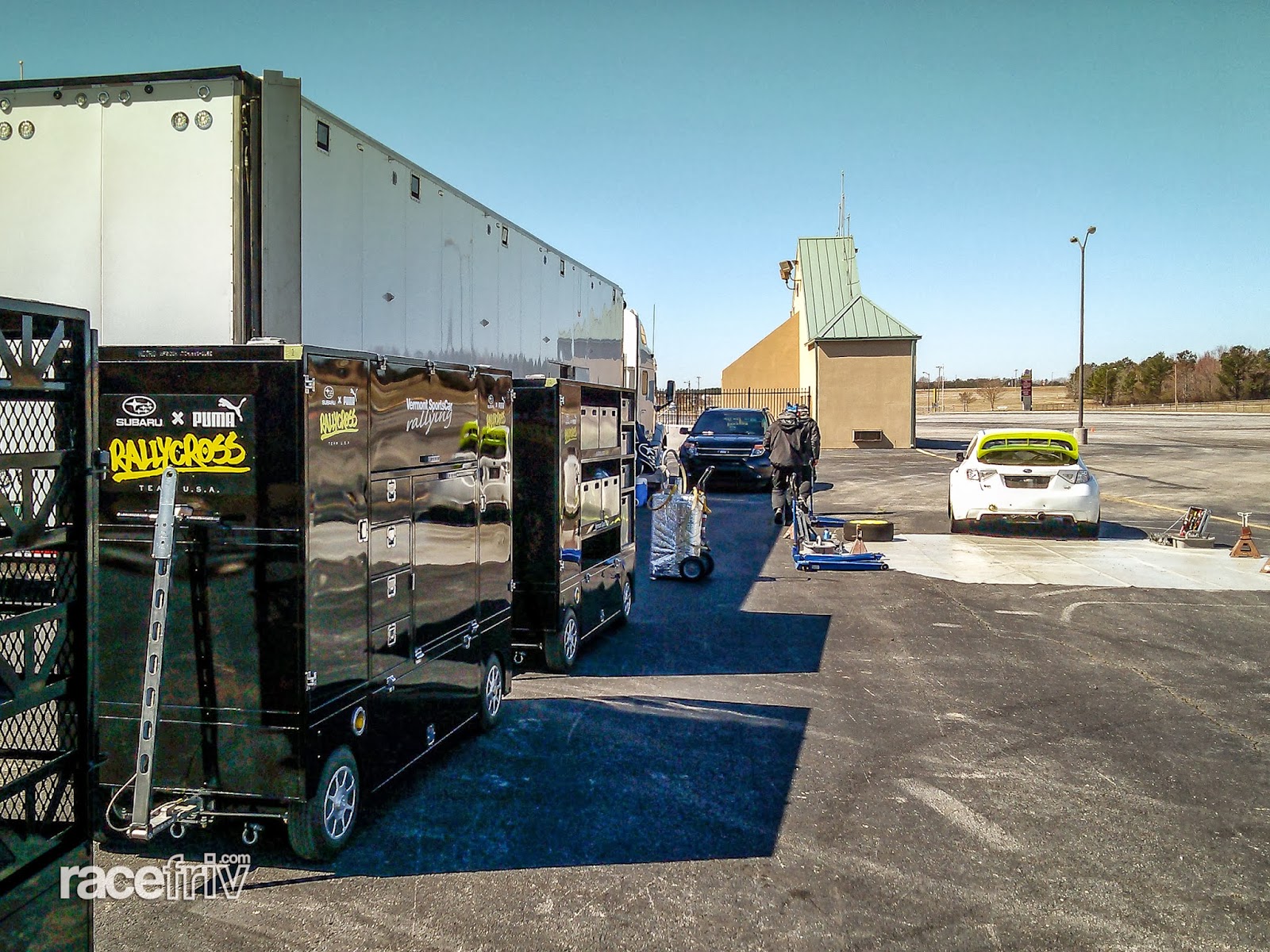 It turned out that the test was for the new car, recently brought over from Sweden.  Same GR base chassis but with a lot more structural changes, and what looked to me like significant structural changes compared to last years car.  They tested only on tarmac but mentioned there are plans to test on dirt in a few weeks.  Clint the team manager and Sverre had laid out a rough course with some cones to give them some mix of tight and fast turns and were dialing in suspension changes. 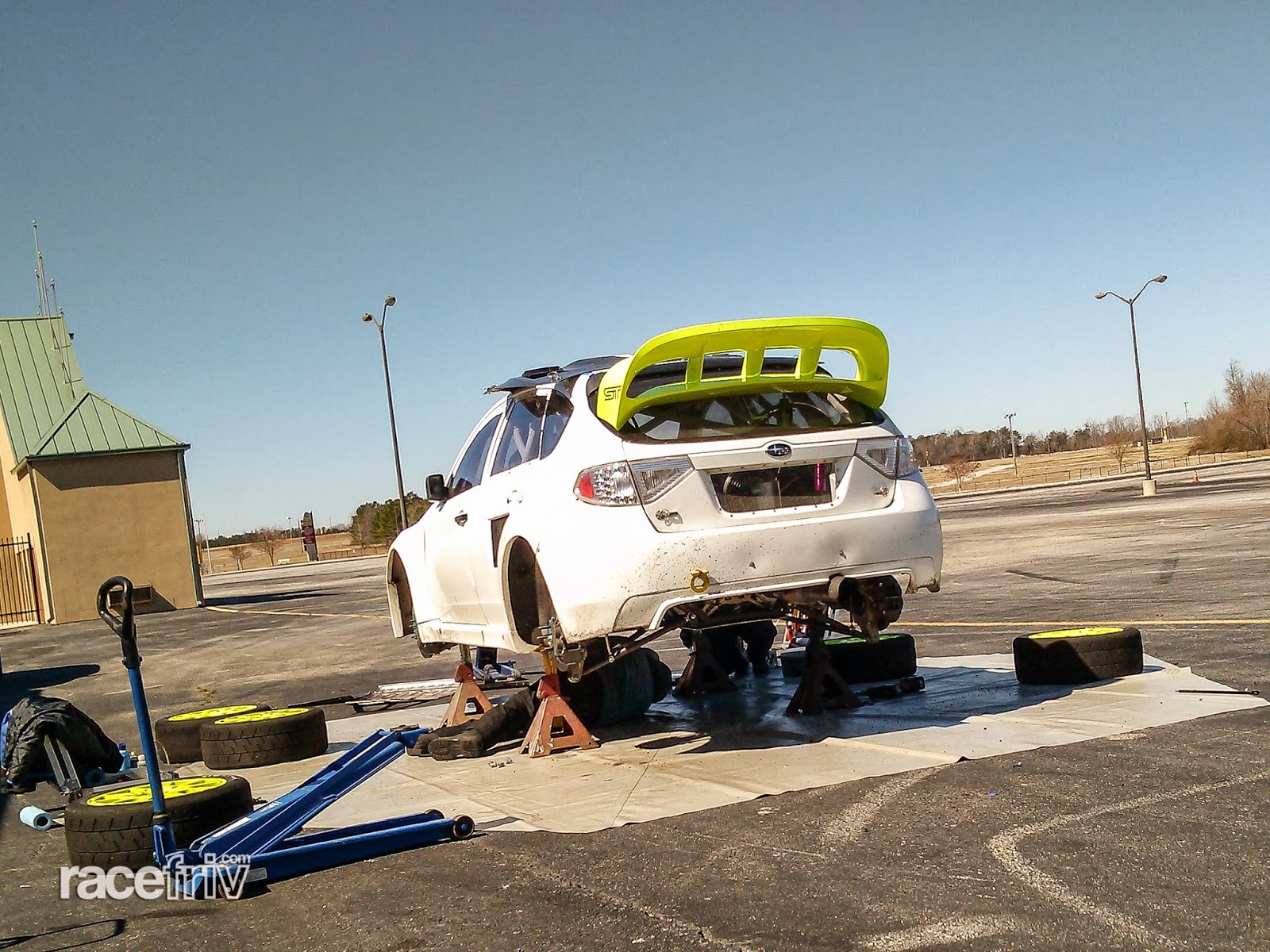 Every 5 laps or so they needed to either change or rotate the tires.  Cooper/Avon, custom-cut super soft race tires are 225s on a 17 inch rim, Custom Method Racing wheels in this case. 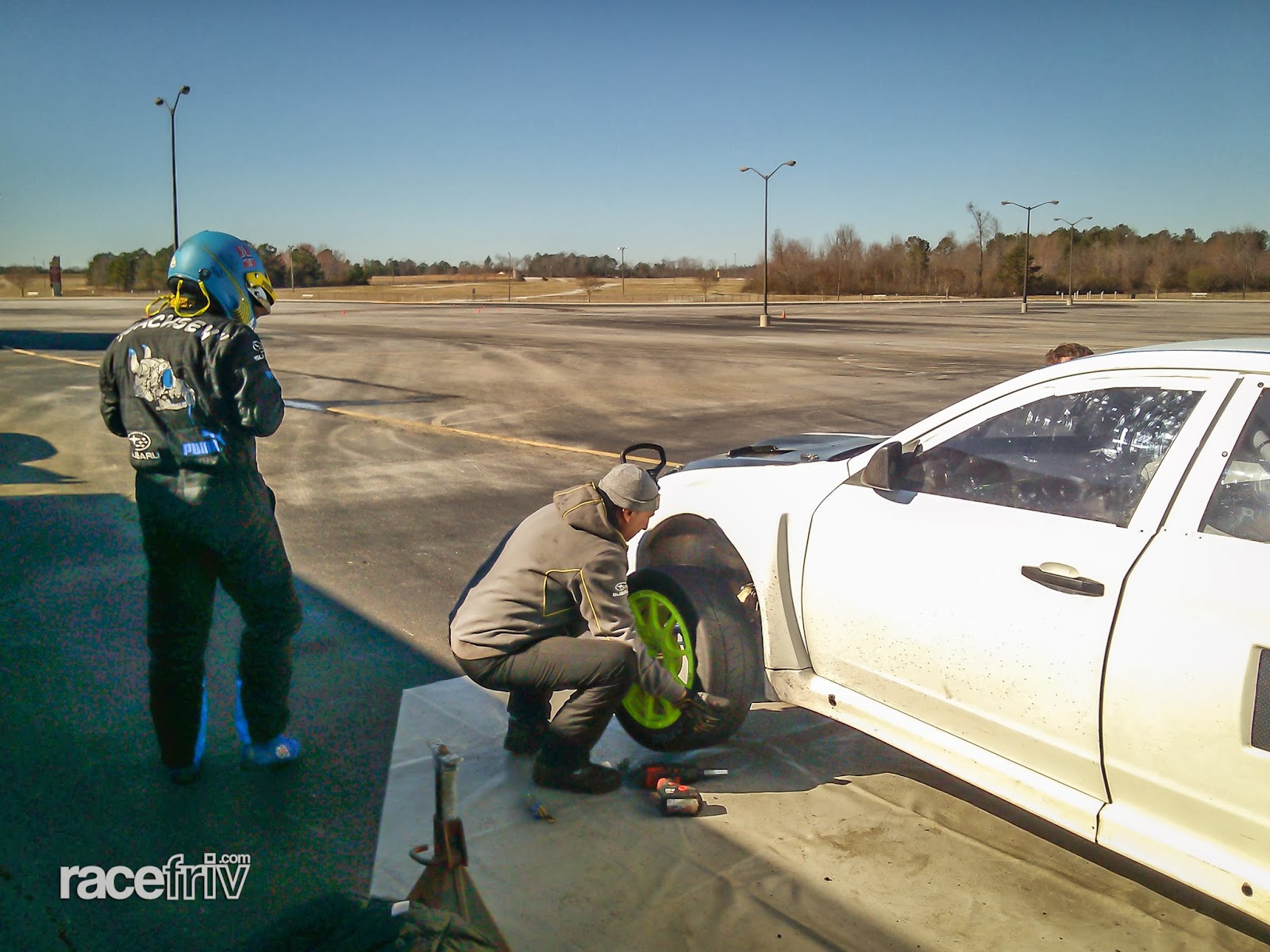 Sverre paid close attention to all the work going on, giving detailed instructions for tire pressure testing, launch control settings and giving feedback through the team radios on how it was handling.

On one run they removed the giant rear wing to understand its influence on high speed handling.  Needless to say it makes a big difference and it went right back on! 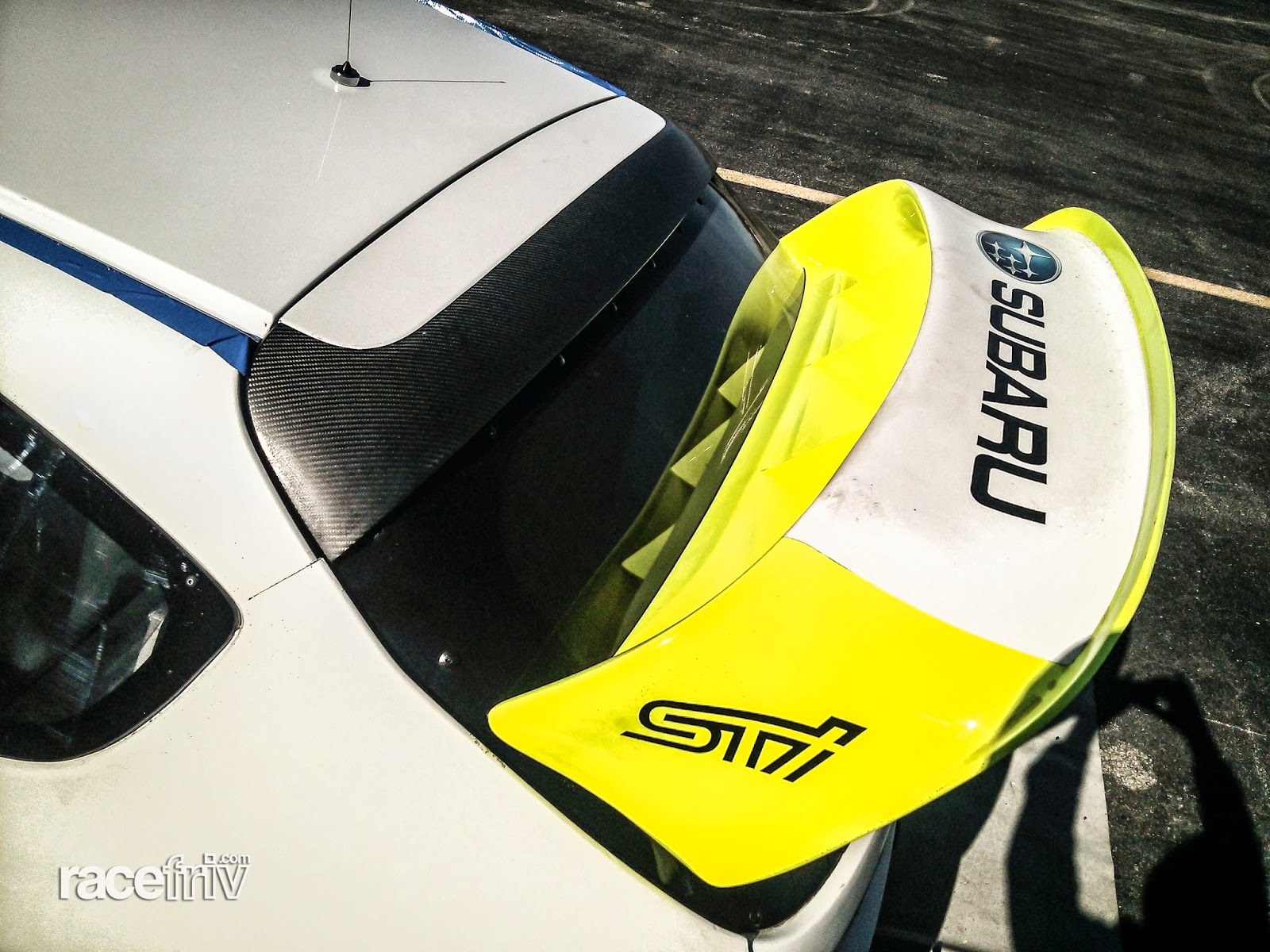 The team Engineer talked to me for some time about engine and chassis changes.  The engine is similar to last year with some "upgrades" but the engine mounting and transmission are new.  Its now mounted higher and rearward, higher because now the front differential is a separate unit with a transfer box (no more symmetrical AWD for this car)  The turbo is located down in front of the engine, behind the biggest intercooler I have ever seen on a car.  The radiator is still in the trunk, and those funky side vents now allow air through the radiator aided by a couple of fans blowing the heat through a screen cutout in the back.  Last year cooling air went in through the rear quarter window vents.

I never got this close to the 2013 car but this looks to be a step up in terms of chassis preparation.  The rear doors are just skins molded to look like doors but just composite added onto the rear quarters and with lexan windows.  In fact all the windows are lexan as you would expect.  The fender flares look like a WRX but are custom and wider, and the driver sits almost a foot rear of the stock seat location.  So much so that from the side you cant really see the driver very well - see below: 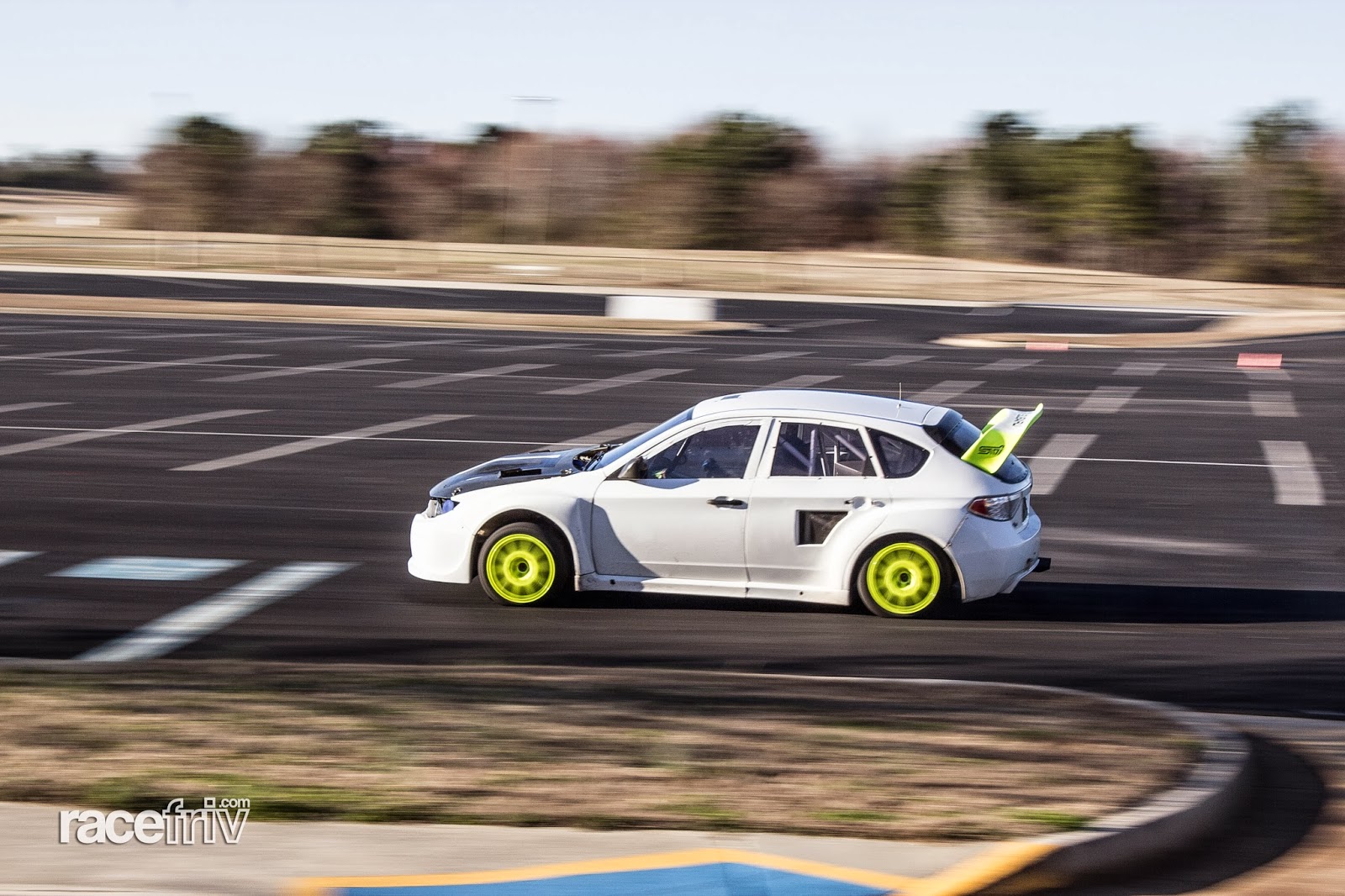 Suspension as you can imagine is 100% custom, with lots of parts like sway bars being relocated.  It allows for a lot of travel, and the shocks are race units with external reservoirs.  The car runs on race fuel, which as usual has that amazing smell that clings to you like cologne.  The tank isn't very big so they filled it after every few runs.  Everything is designed strictly for its purpose, short races, with emphasis placed on a good launch to get to the 1st corner.  The engine has a restrictor in front of the turbo, limiting maximum power, so effort is put into producing maximum torque across the entire rev range.  They quoted 650ft.lbs at 3500RPM. More than enough to blaze those sticky tires just fine. 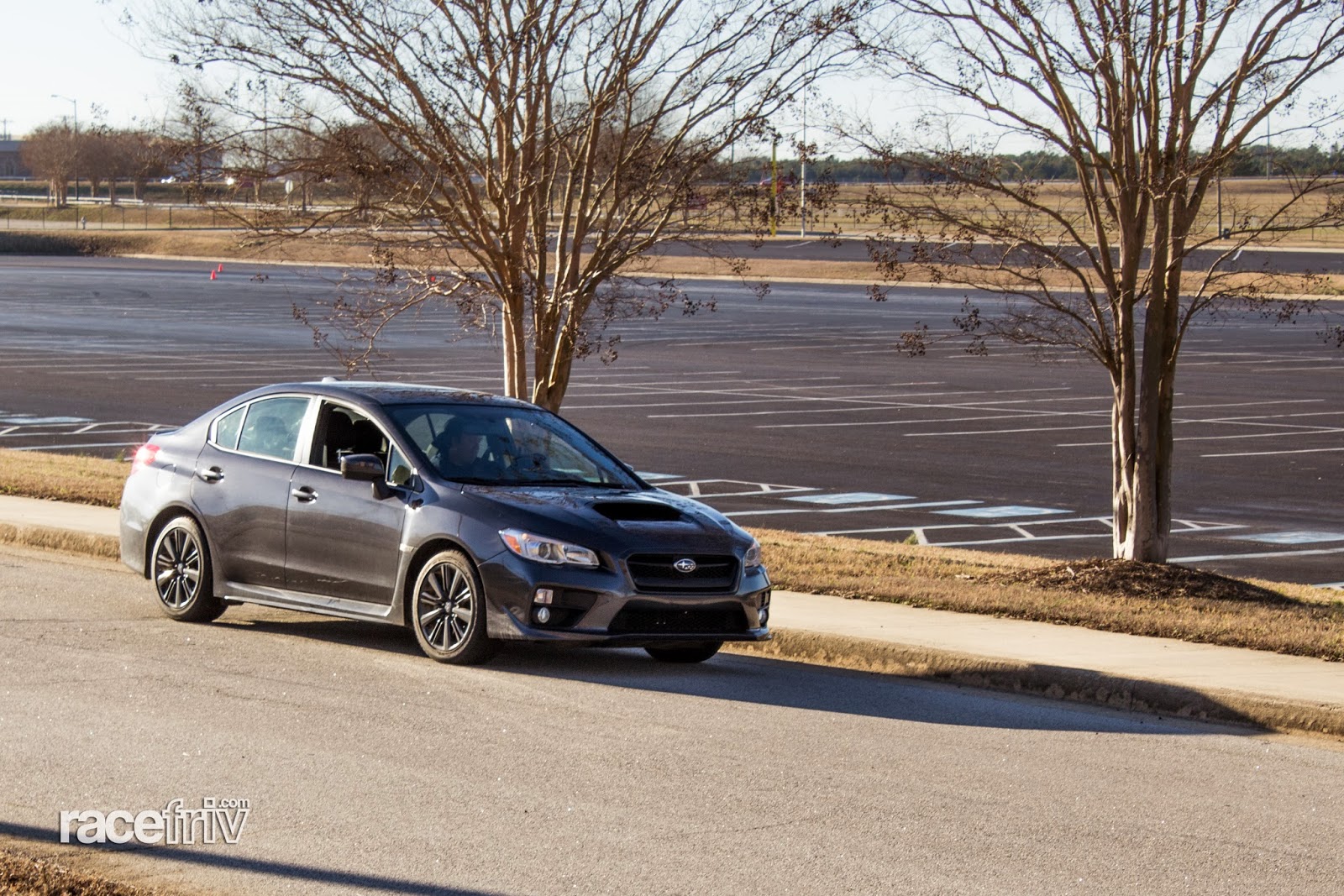 Another source of excitement was the team managers recce car, the new 2014 WRX.  He is very impressed with the chassis, and like the interior refinement.  He also had nice things to say about the curvy roads in the Georgia countryside.  I couldn't agree more. 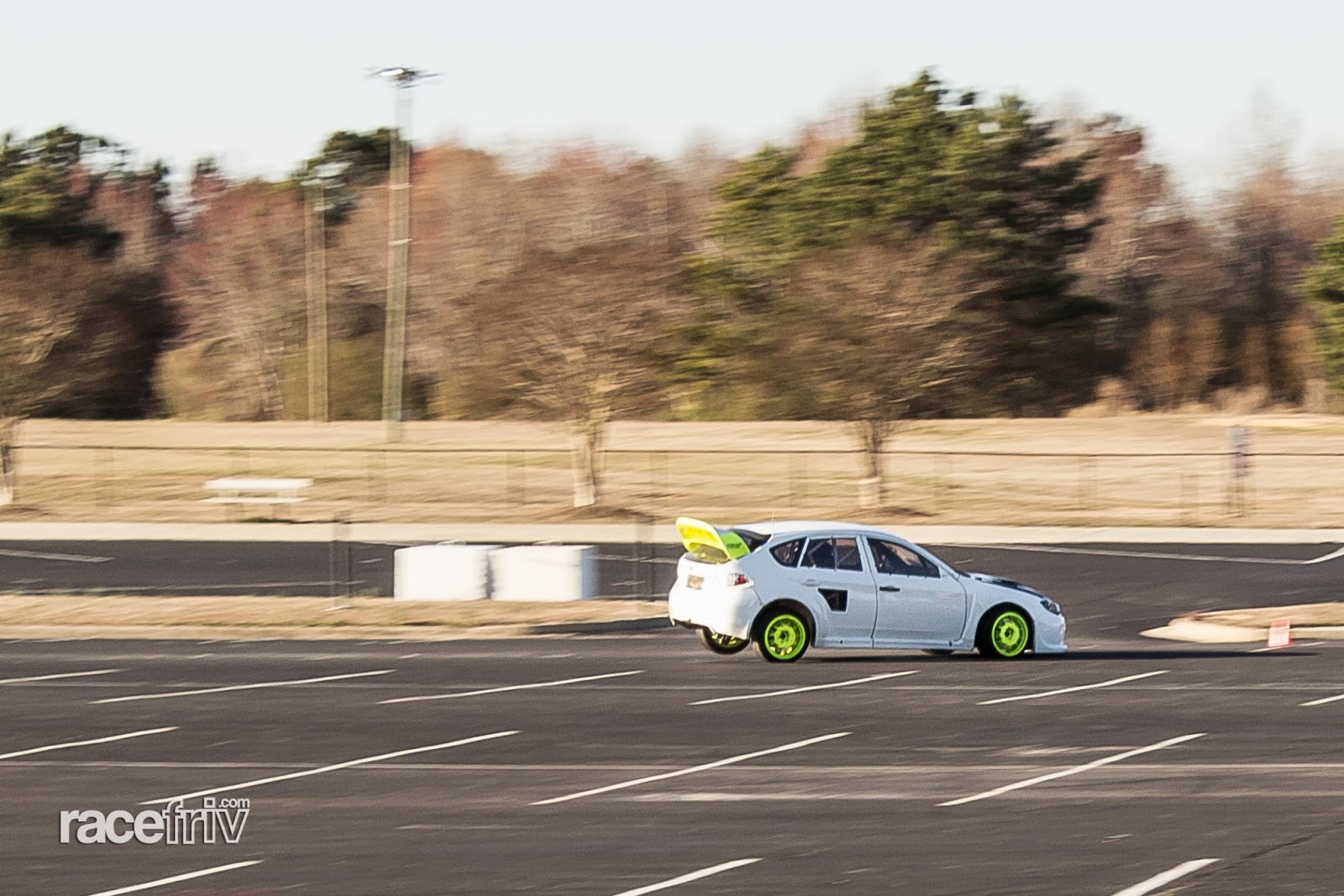 You could see that the team were trying out different settings to make sure the could would rotate in the turns, when I first got there It seemed they were dialing out some understeer, and quickly had it working great.  They then got to work on Launch control and started working their way down in tire pressure to see how much the tires could take. 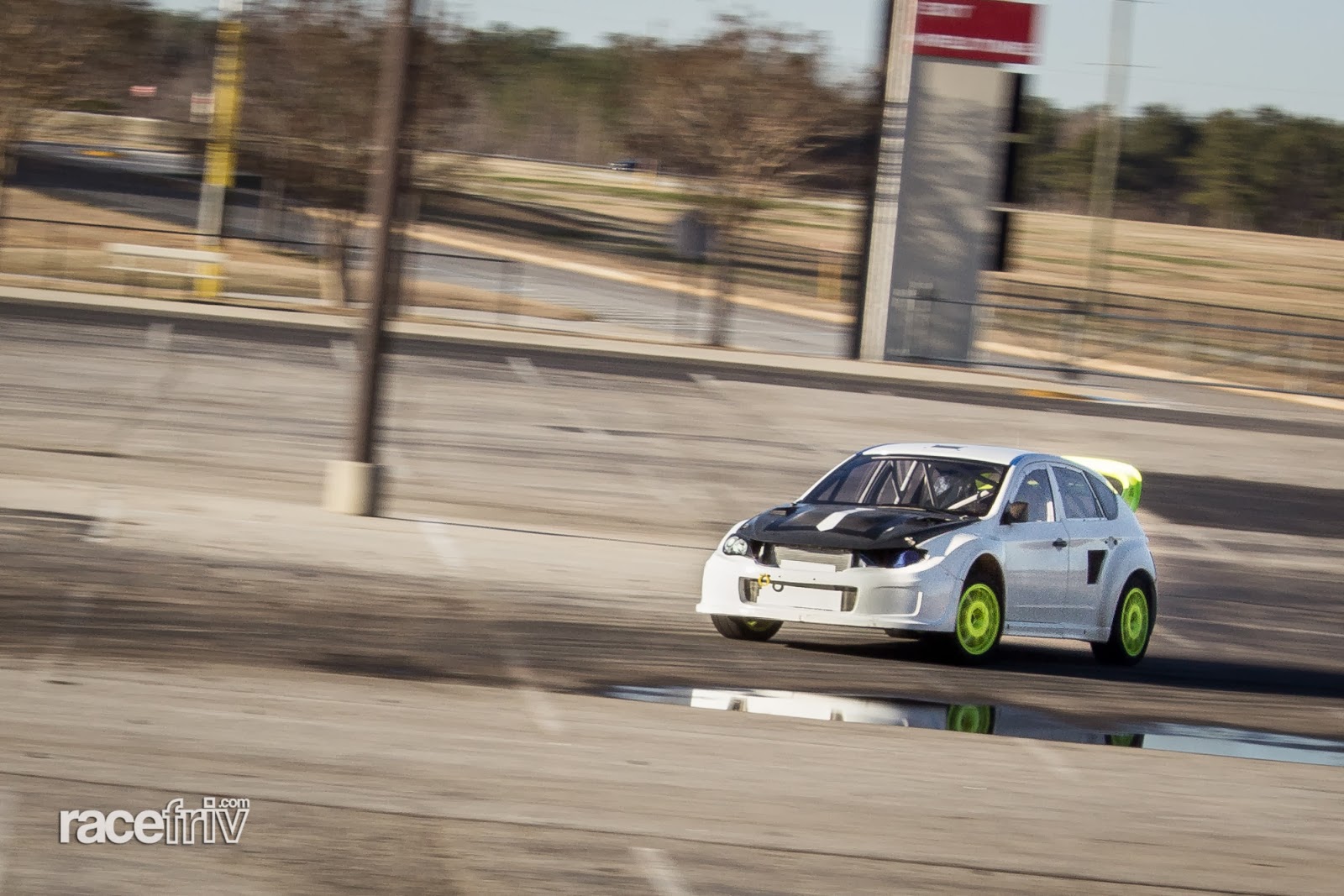 I liked that they had a tie on the carbon hood I guess because this year its all business!  Hopefully the changes pay off for the team, they seem confident.  I asked about Toomas Heikkinen because it seems that he will race in the FIA series this year and not defend his GRC crown.  The team isn't sure but last they heard he had not secured a seat in GRC.  That leaves a top driver missing from the top team, while Tanner has moved to a VW this year.  With so much change elsewhere I hope Subaru can work its way up the standings. 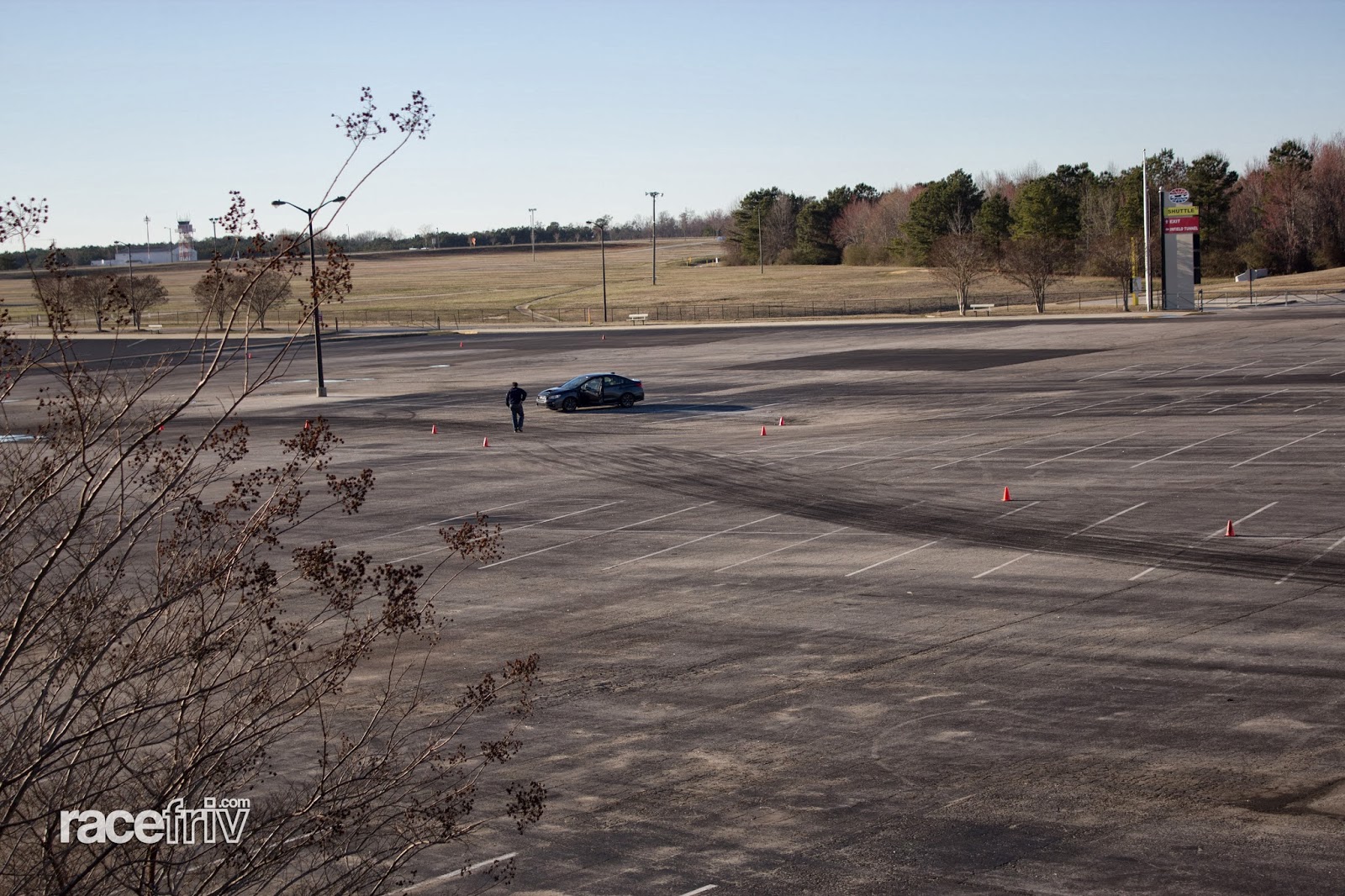 Clint the team manager was super cool to talk to.  He spent most of the time helping Sverre with the course layout and giving him feedback on the car from an outside perspective.  The whole team worked very hard the whole time were there, even the driver of the truck lends a hand when needed. 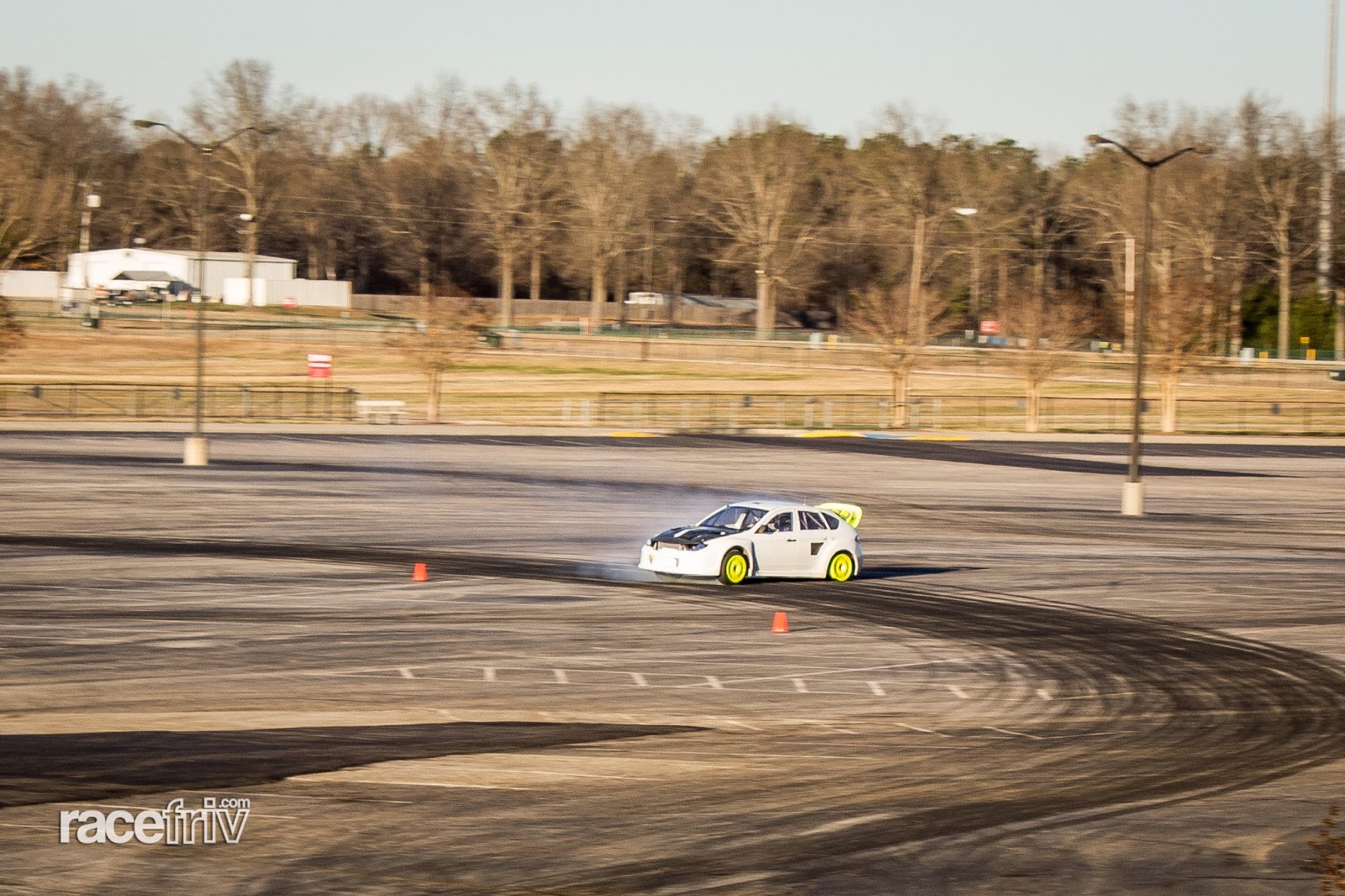 Ish brought his camera for the action shots but we didn't have the best lenses to get the details you are used to.  However he you can see what happens above when you finally go to low on tire pressure! 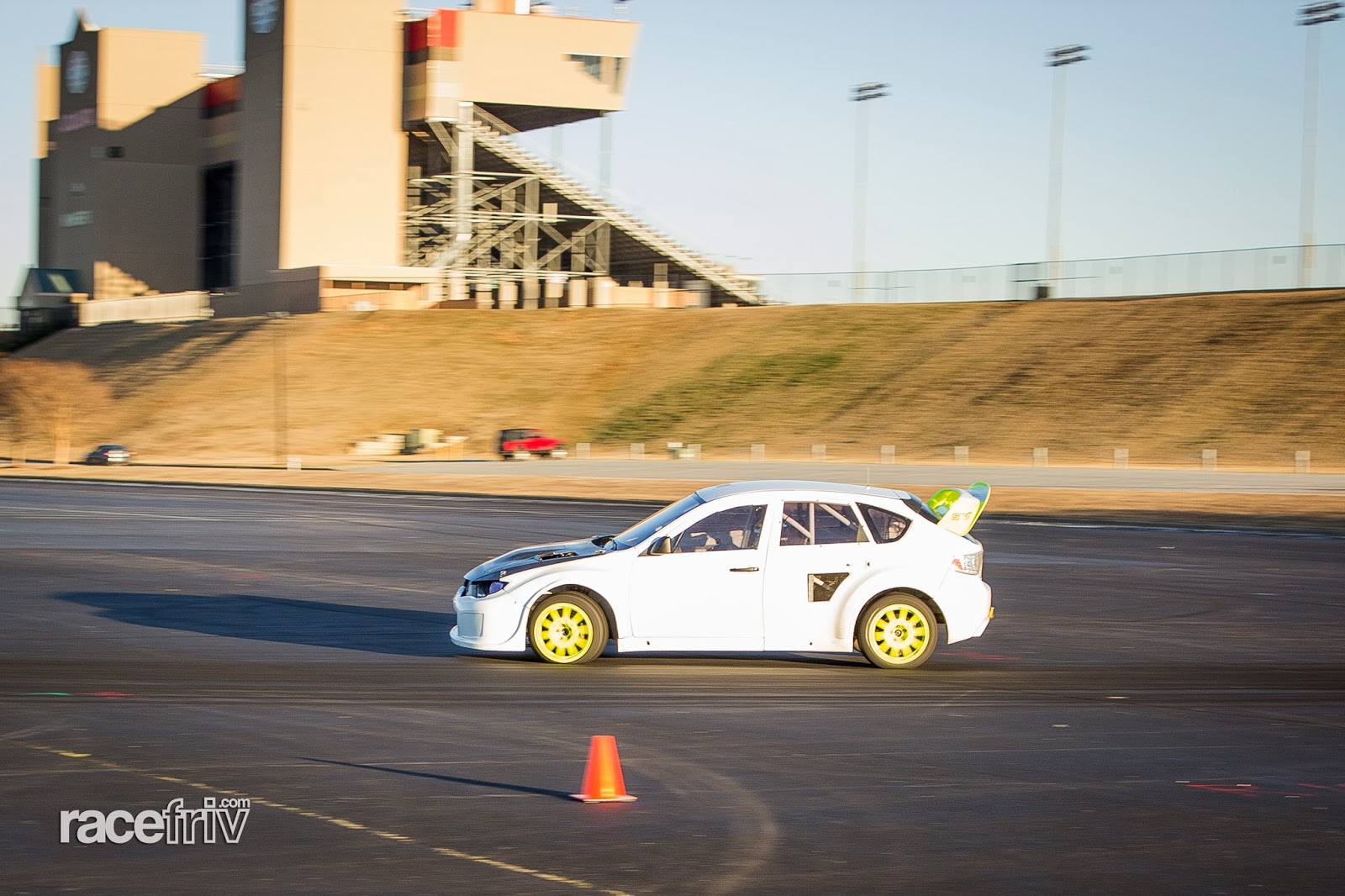 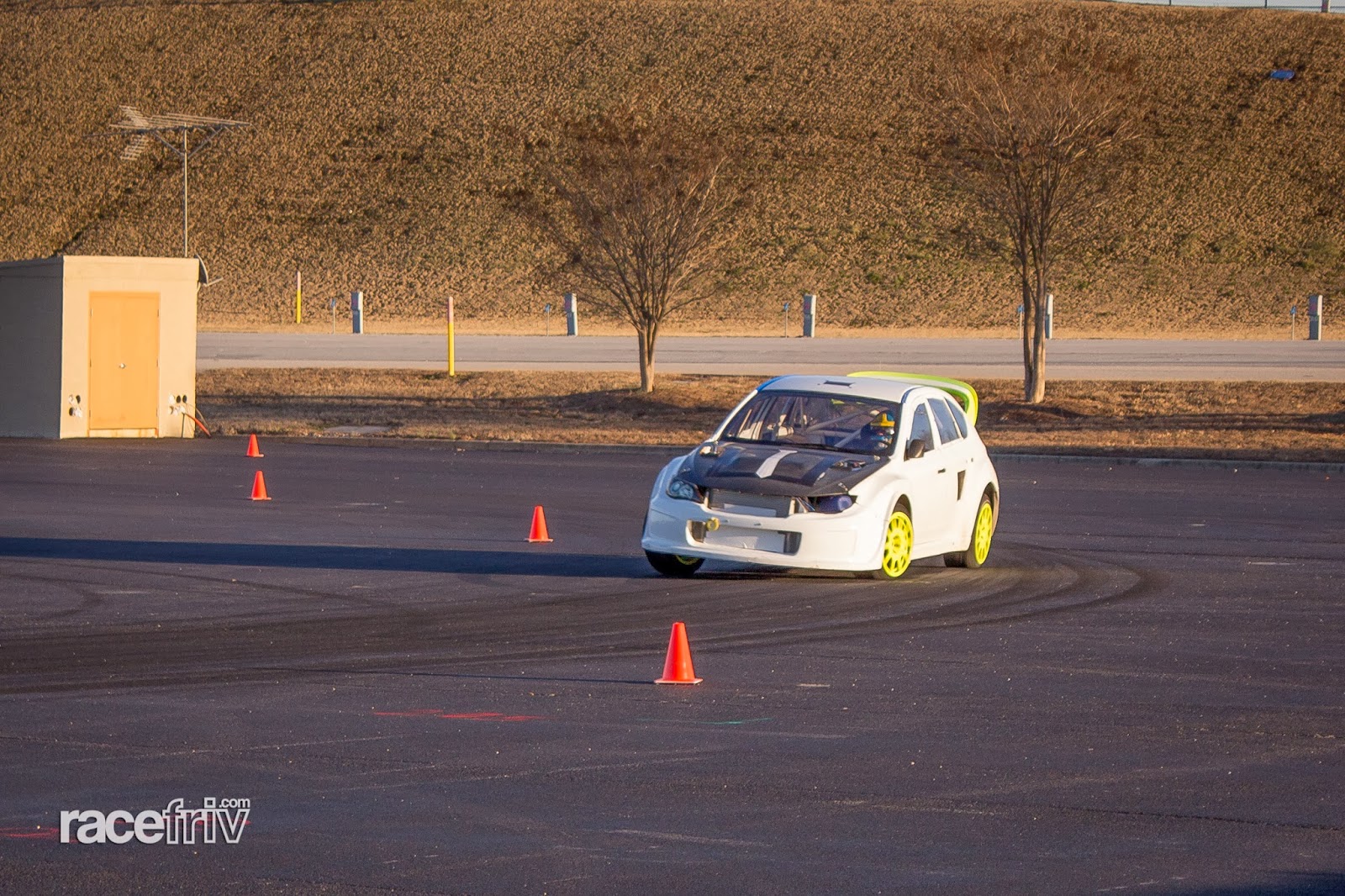 Those shots give you a sense of the forces on the tire sidewall with such sticky compounds.  Rubber marbles flew off all over the place on every turn. 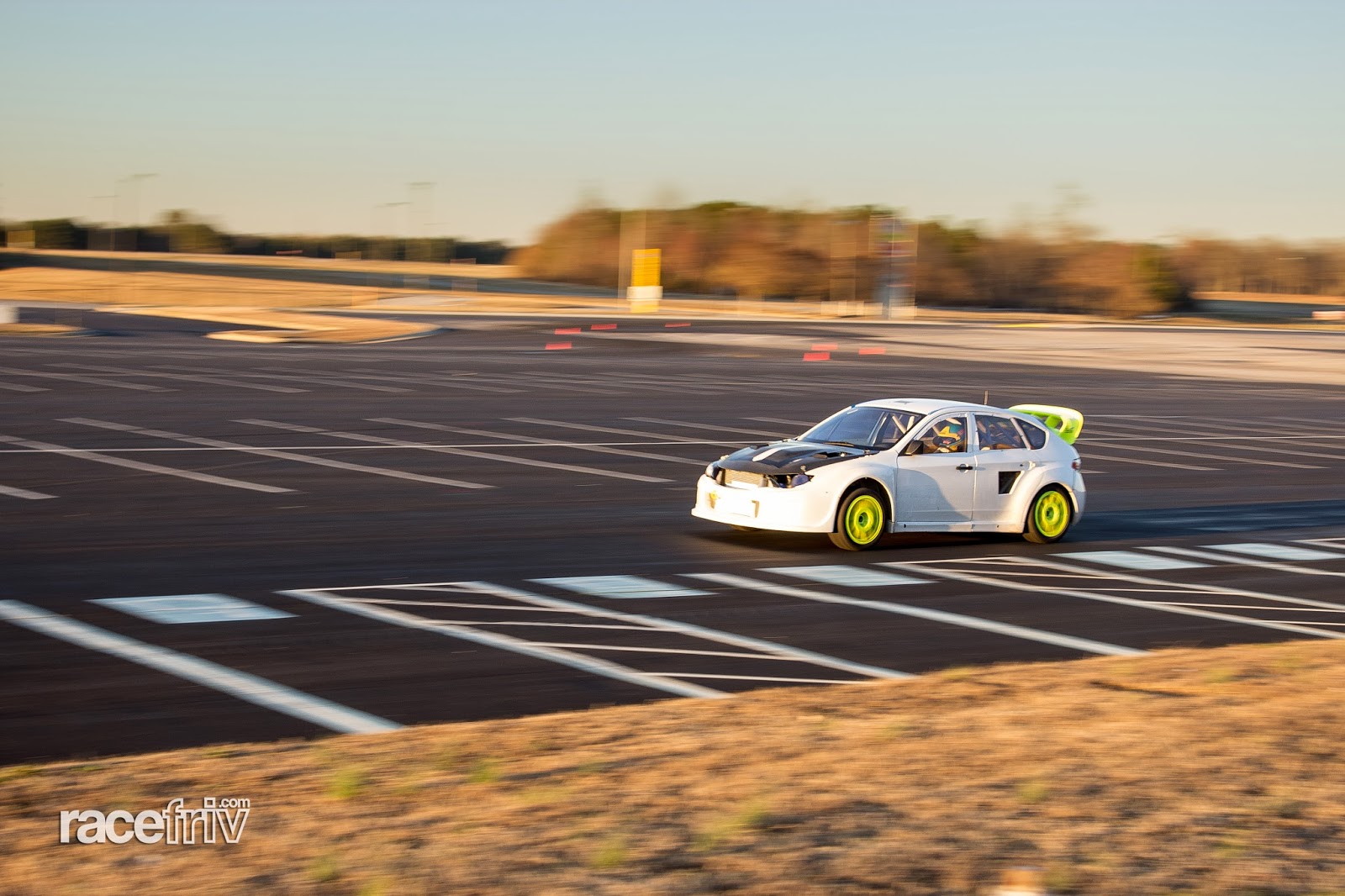 One of the most impressive aspects of these cars is their ability to launch.  On Tarmac it's estimated that a good launch gets you to 60 in 2 seconds or less, these cars explode off the line thanks to their Anti-lag system.  The driver holds a button which puts the engine in launch mode, retards timing, bypasses air around the throttle and keeps the turbo spooled.  Then when he holds the throttle down the rev limiter (not a fuel cut but an ignition cut) holds it at the perfect speed for launch, and the ground around the car shakes.  With the grid so wide (4 cars) there is obviously a huge priority put on launch speed to get to the corner first. 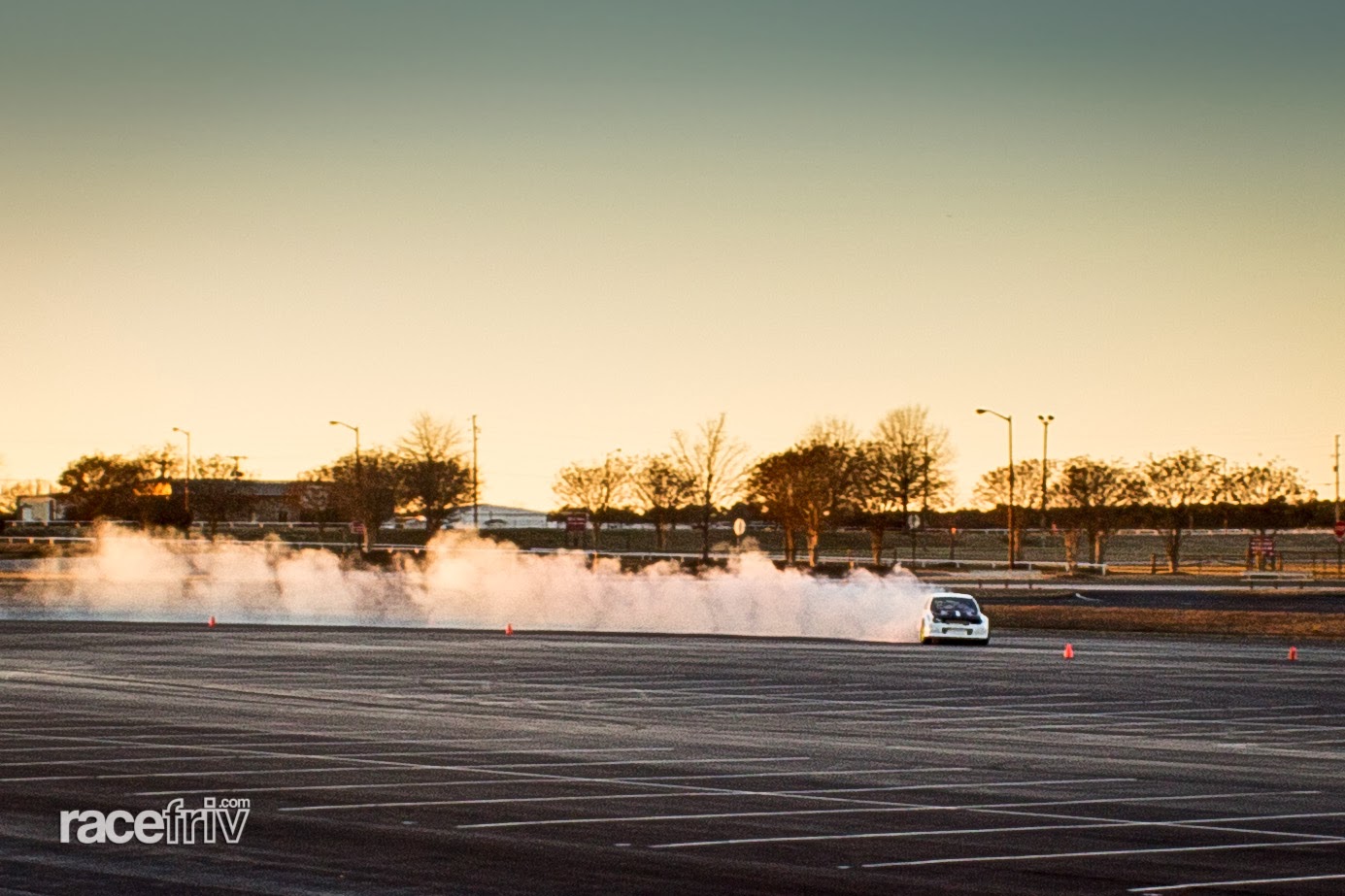 As the test day was winding down Sverre gave the camera one long last drift before heading back to the truck.  Thankyou to Sverre and Clint for letting us hang out like some creepy groupies for the afternoon while you got your serious work done.

If you made it this far down here's a little video of the launch to give you taste if you havnt already seen these cars in action.  And don't forget to keep up with GRC this season they will be on TV (NBC sports) some will be live, and some tape delayed.  Things kick off in Barbados in May - and we may travel to Charlotte in July to meet up with the team again.  See the GRC calendar for more info.