The last time we talked about project scrap metal I was at Nopi and explained how I destroyed the clutch towards the end of the last day. The car has always felt good but always a little strange as it felt like the clutch was slipping ever since I dropped it in and at Nopi my feelings were confirmed when I toasted the clutch so bad I could barely get it back on the trailer. Well its time to remedy these issues! So click read more to check out the clutch swap and all the other improvements I made over the winter break to project scrap metal. 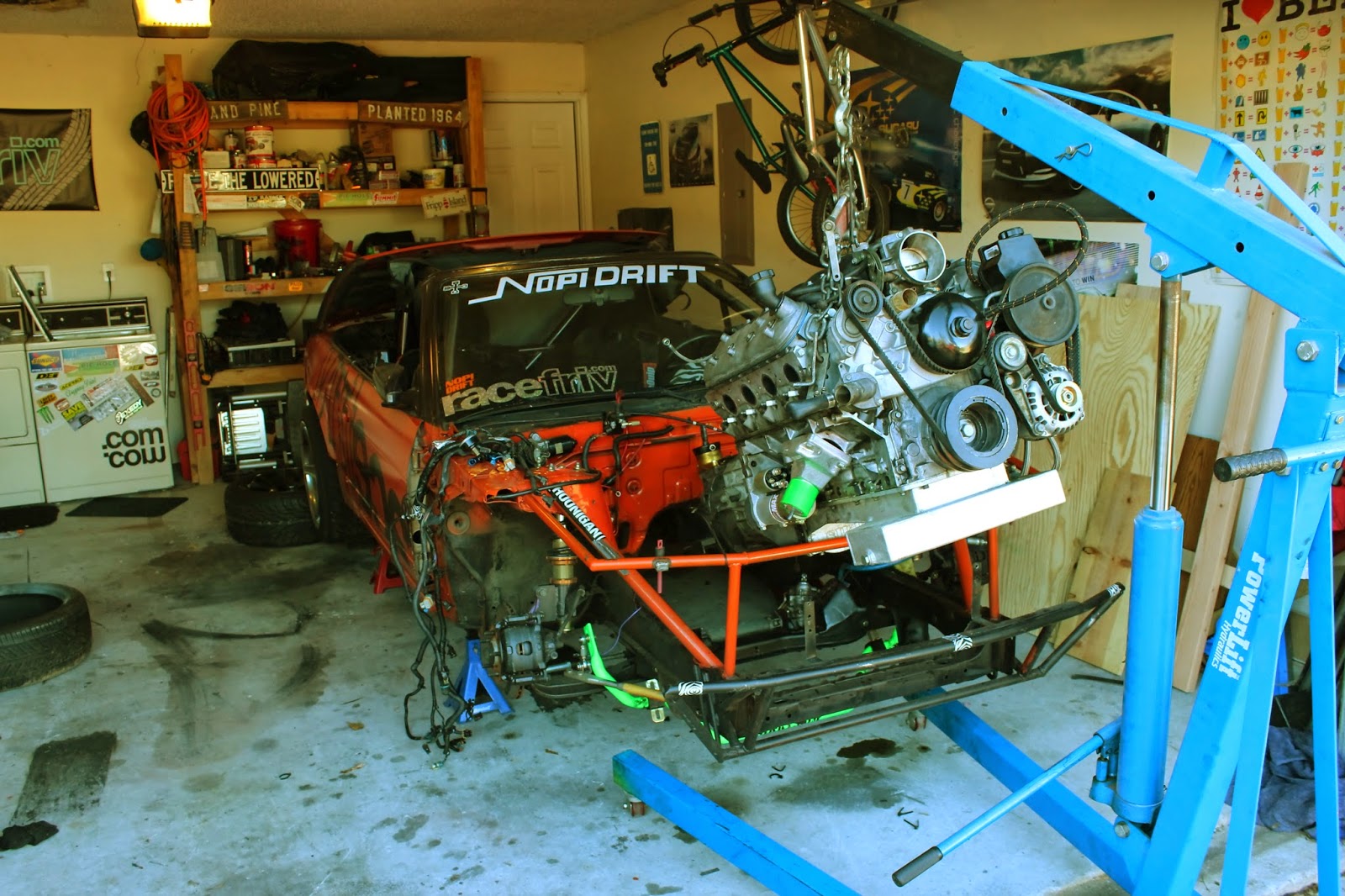 So I didnt remember to take a pic of the old clutch before I scrapped all my old stuff but trust me it was toast, down to the rivets holding it together toast, and the pressure plate and fly wheel both were blue and cracked from stress. Also something rather odd happened in the bell housing which give me some clues of why it may have felt like it was slipping the whole time. The SPEC clutch the tranny came with required a spacer behind the clutch slave in order to reach the clutch properly but the spacer was poorly designed and could slide over and fall down the side of the slave and make the slave all cock-eyed on the input shaft which ruined the slave bearing and the slave itself. Luckily there was no permanent damage that couldn't be fixed with a couple of new parts and luckily the new clutch doesn't require this spacer, it works like a stock application. 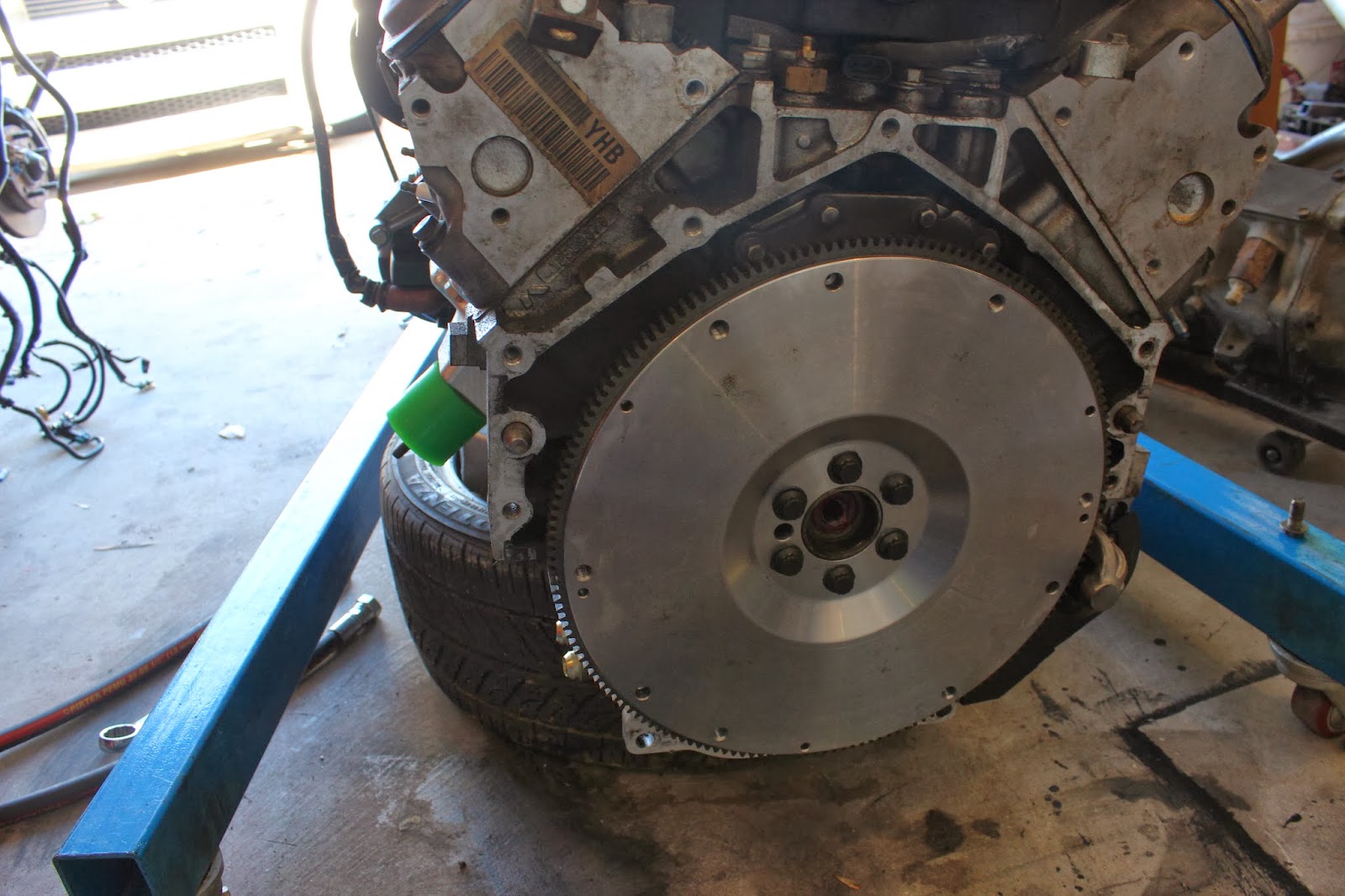 I tossed around the idea of a LS7 clutch for a loooong time but came to the conclusion that it wasnt meant to be a track only clutch and after a lot of research on LS1Tech.com came to the conclusion that the Stage 2 Monster 12"clutch was perfect for drifting and is good up to 550 hp so I have a good bit of room to breath if/when I upgrade this beast with a cam and some heads. Also this package comes with a lightened flywheel which is 10lbs less than stock. I love stuff like this when building motors, simple stuff like underdrive pulleys and lightened flywheels go a long way with out adding any extra stress to the motor. Free power (sorta). 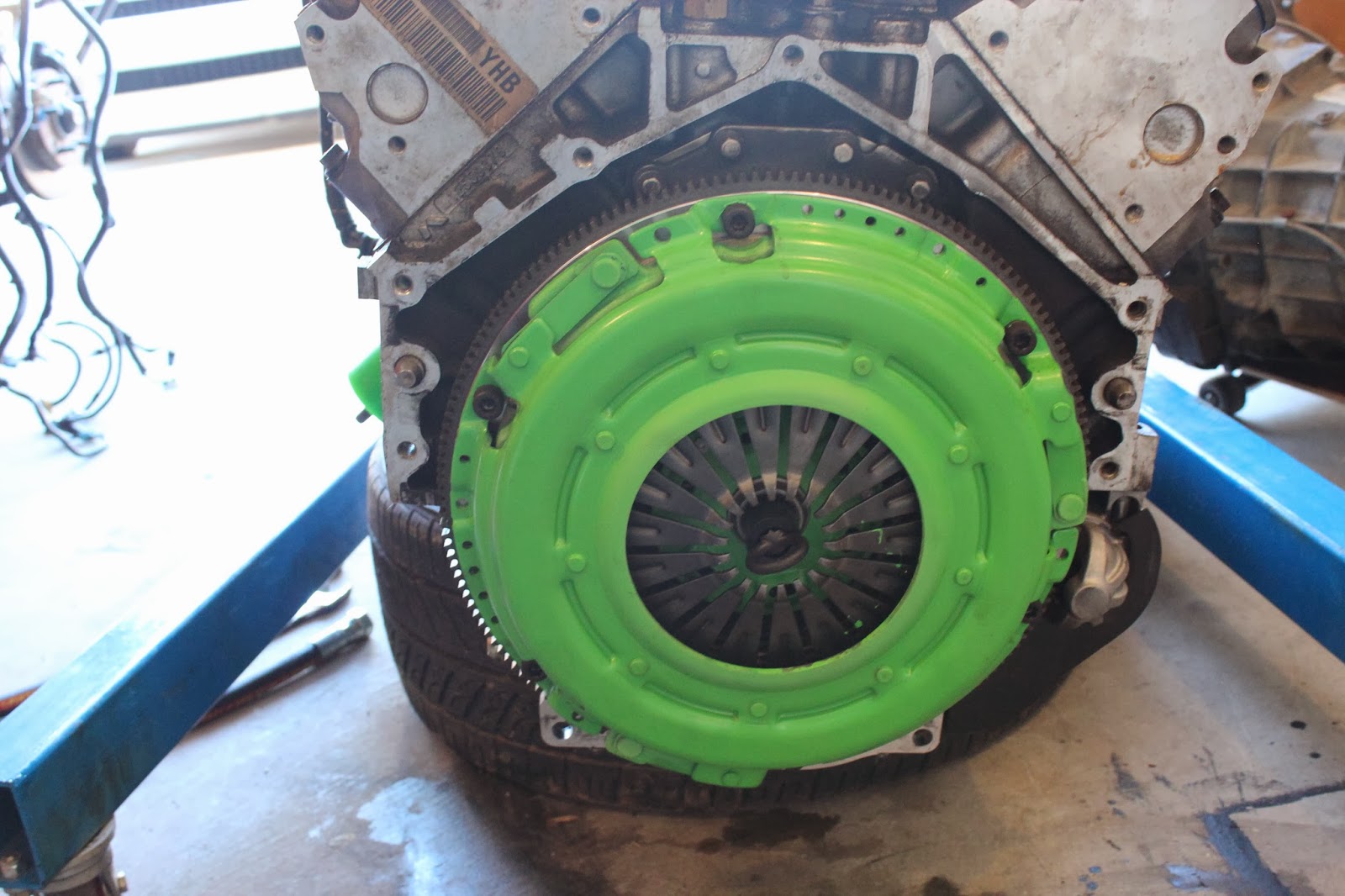 So here is the pretty green Stage 2 Monster Clutch. I have driven it around the neighborhood and it feels AMAZING. The power is instant and the clutch feels so light I didnt think the slave was working at first. The power is instant now instead of having a big hesitation like before, its going to feel so much better to slide now. 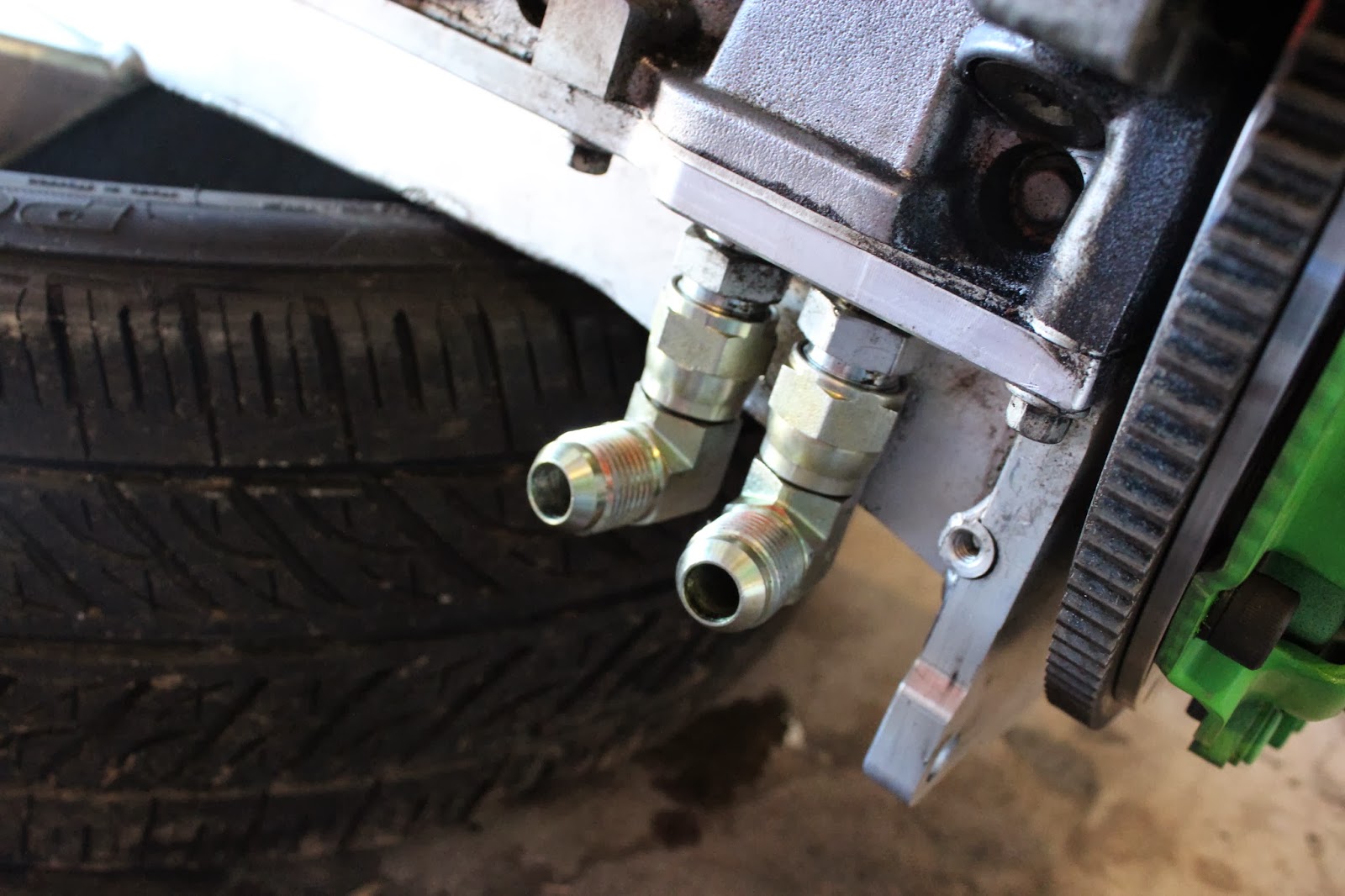 So the next thing wanted to fix was my small but really annoying oil leak, the Sikky remote line kit, is...lets just face it, kinda shit. The stainless lines they give you are plastic lined which holds the oil no problem but since its lined with plastic it is easily kinked therefor giving you less flow. Since space on this swap, especially in this area, is so tight your going to kink the lines. Also as you can see in the above pic the in/out lines of the sikky pan are really close to the wall of the pan and you cant really tighten down the lines  once eveything is installed, plus the lines were cheap so they always leaked a little. So I thew all that crap away and got a bud of mine to build me some custom hoses that were a perfect fit and rubber lined with a steel braid liner on the inside. Also instead of struggling to tighten down the lines once its installed I added the 90 bends in the system so I can tighten them down before I drop the motor in, then when I install the hose I can come from the bottom which has tons of space. 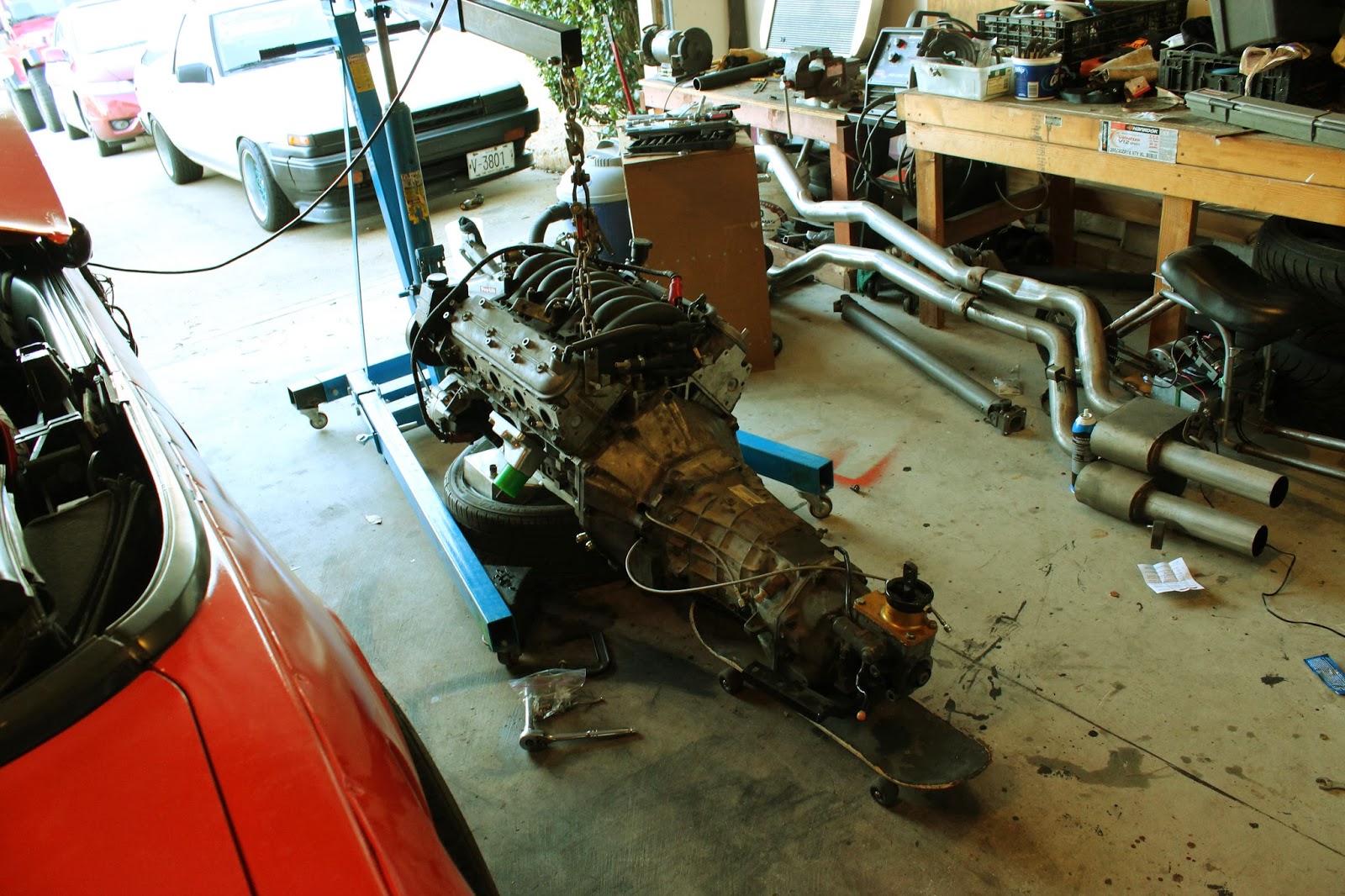 So now that I had all that sorted I put the tranny back on.( racefriv note: if you dont have one of those fancy transmission sliders to slide the input shaft on to the motor, just use a skateboard it works great) 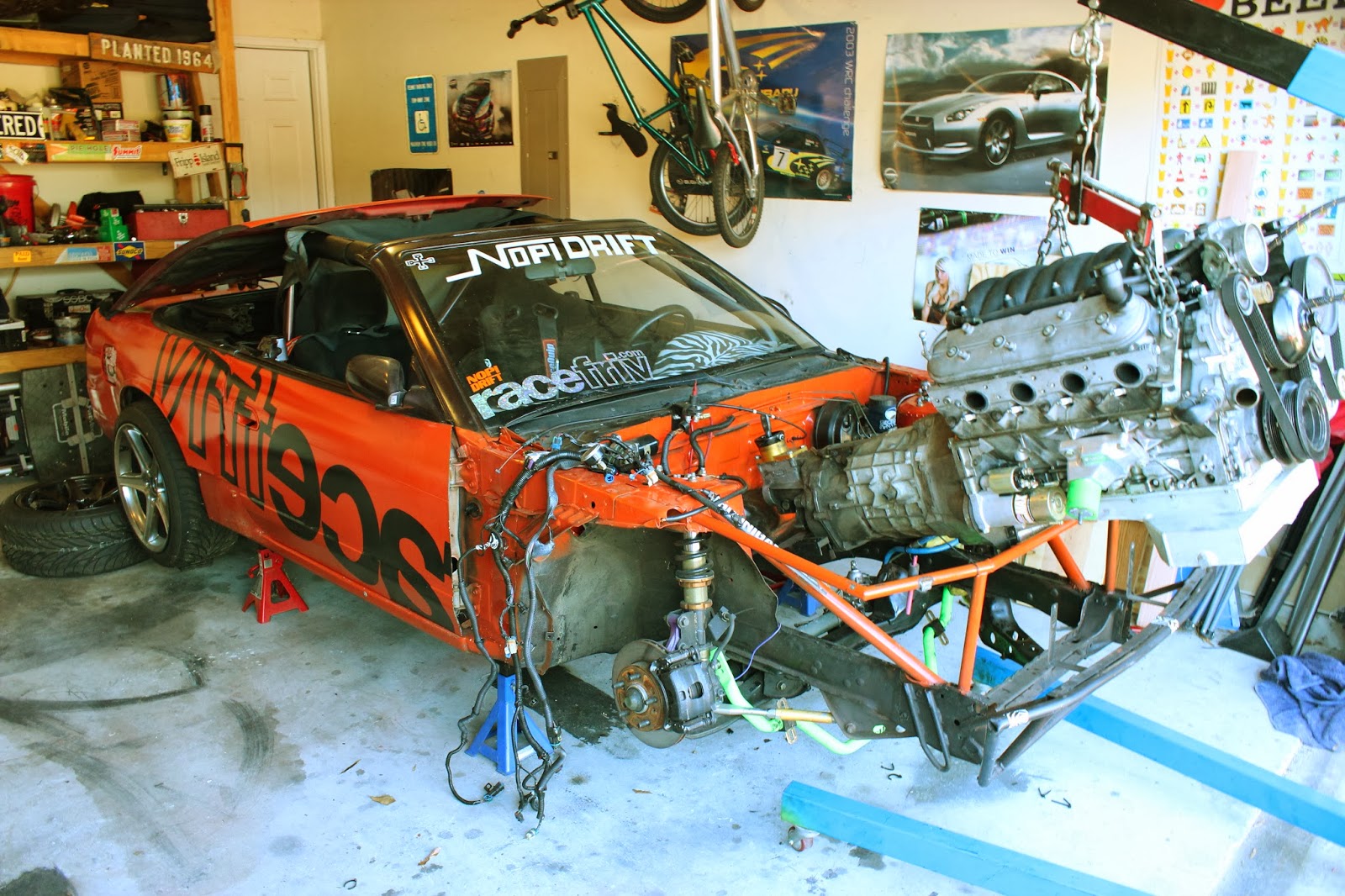 So put the engine back in and it was a pain as always but I prevailed and got it in on a freezing day. 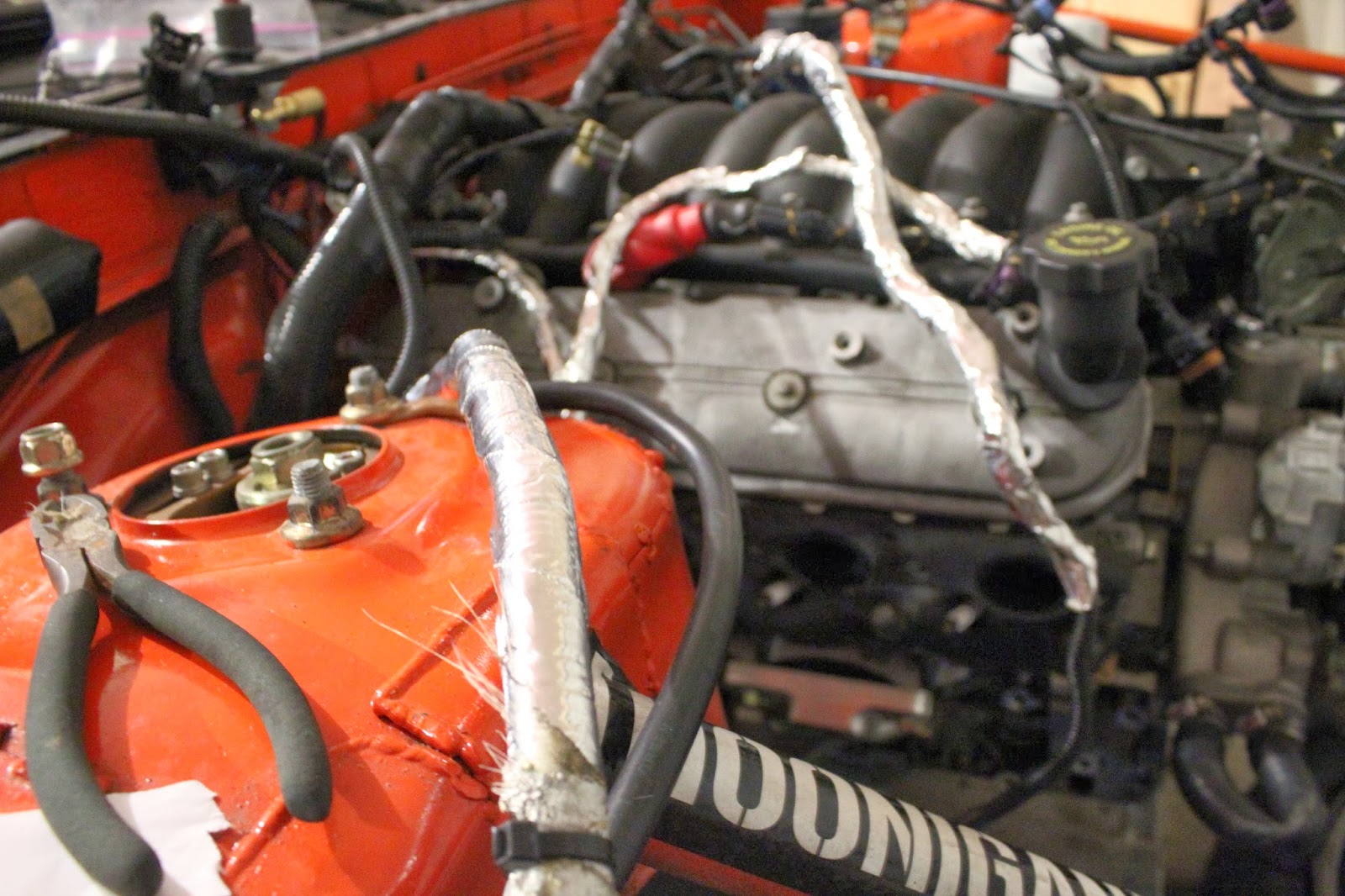 Since I pulled the motor I noticed some of the wiring shrouds were starting to melt, so I re-wrapped the melted parts and wrapped them in some thermal protection tape to keep all the wires near the headers happy and fire free. 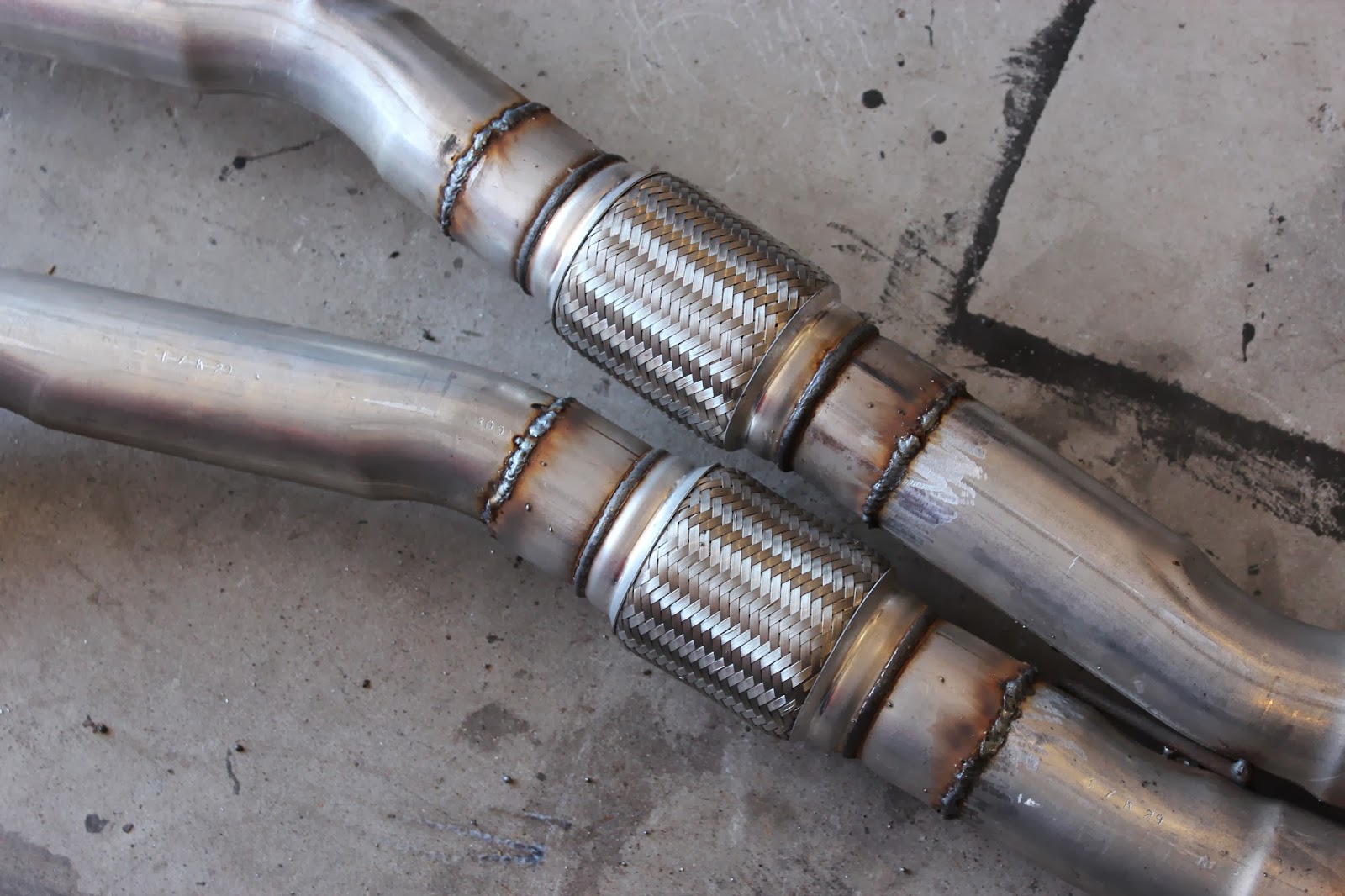 The next improvement on the list was adding in some flex pipes on the exhaust system I had made. Everybody warned me that if the exhaust was hit hard enough that the headers could break and the last thing I need is to break some $600 headers. 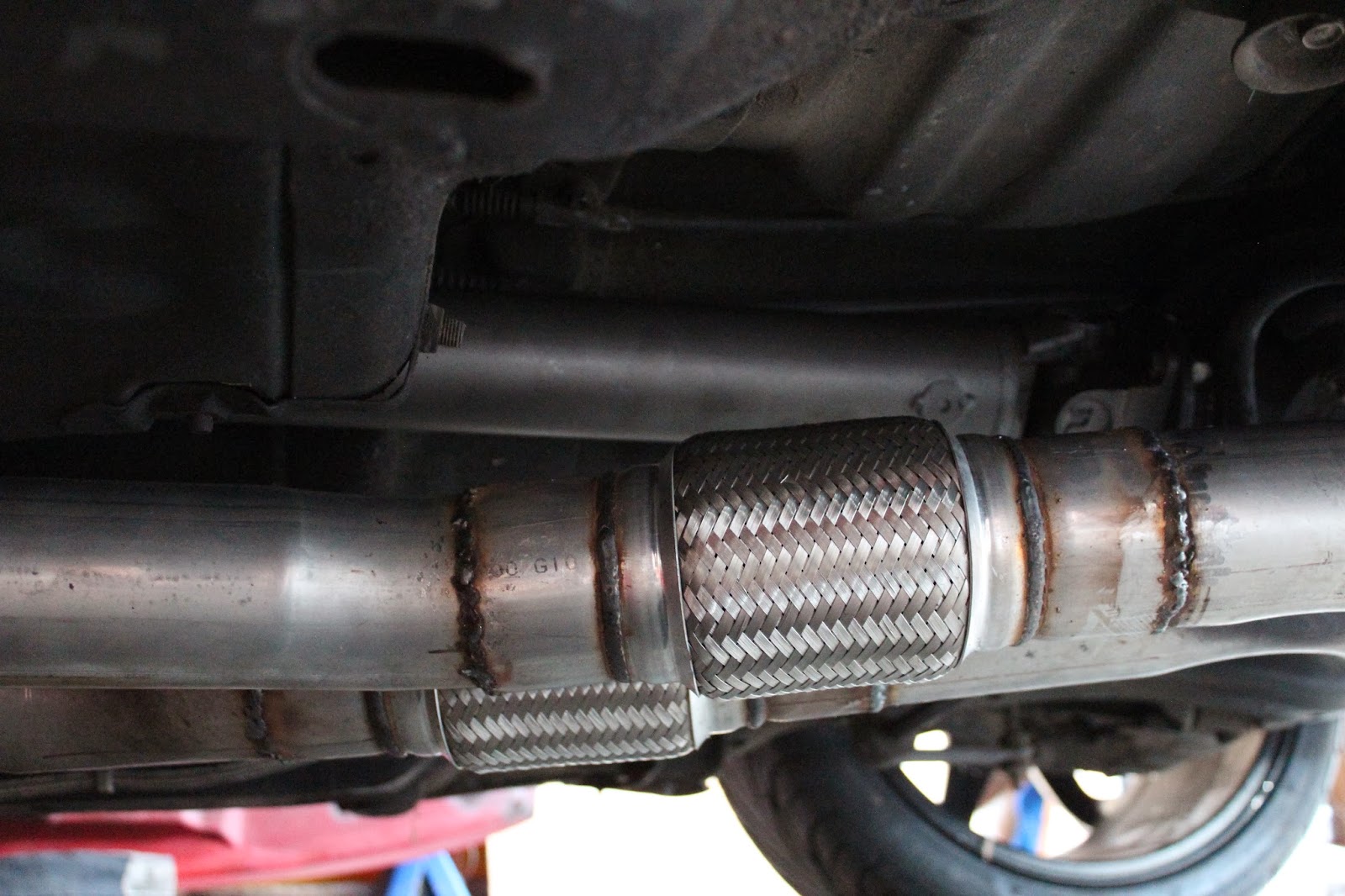 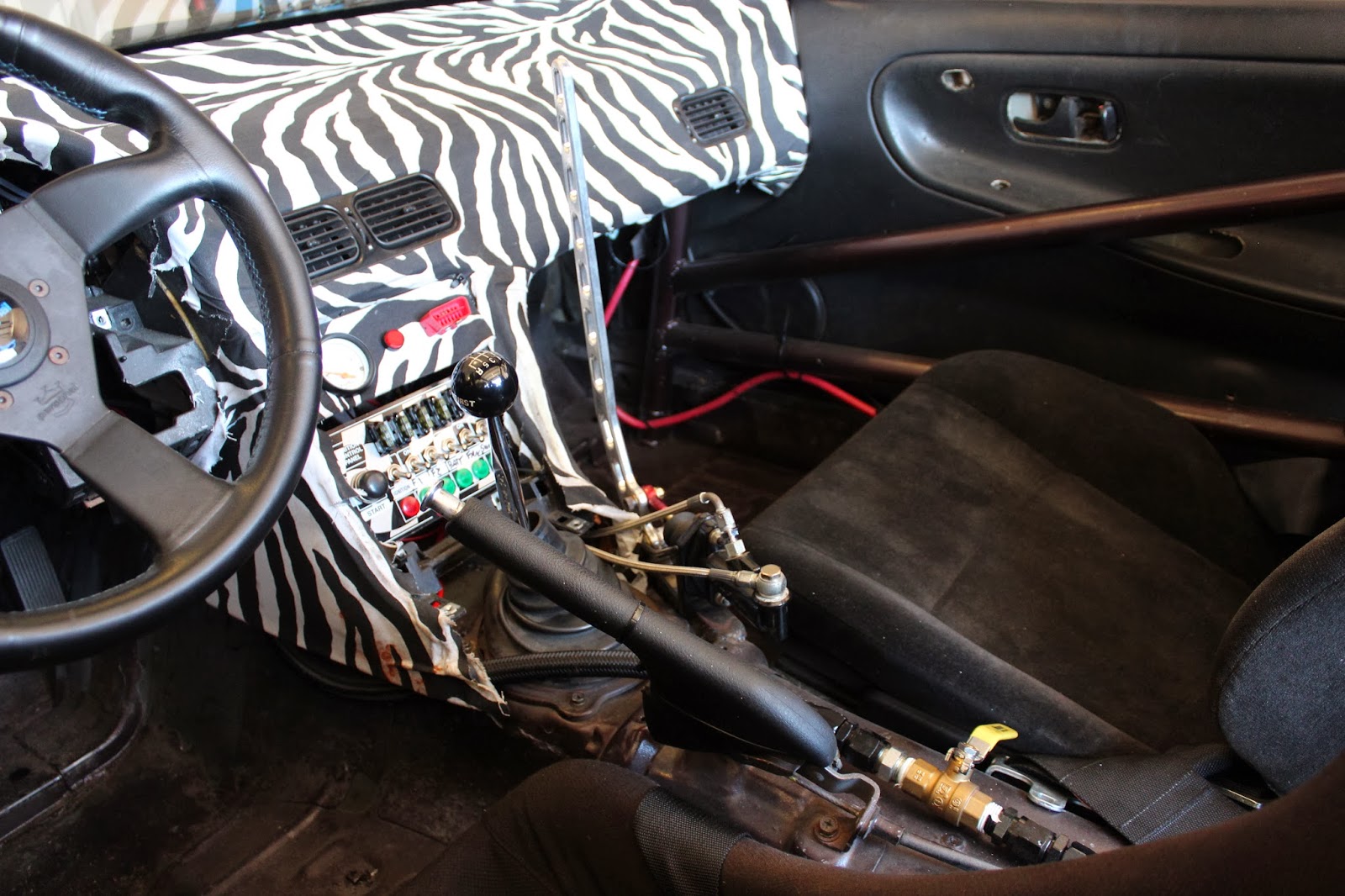 Also cut off my old cable ebrake handle and got it back to normal. The office looks a lot less cluttered now. 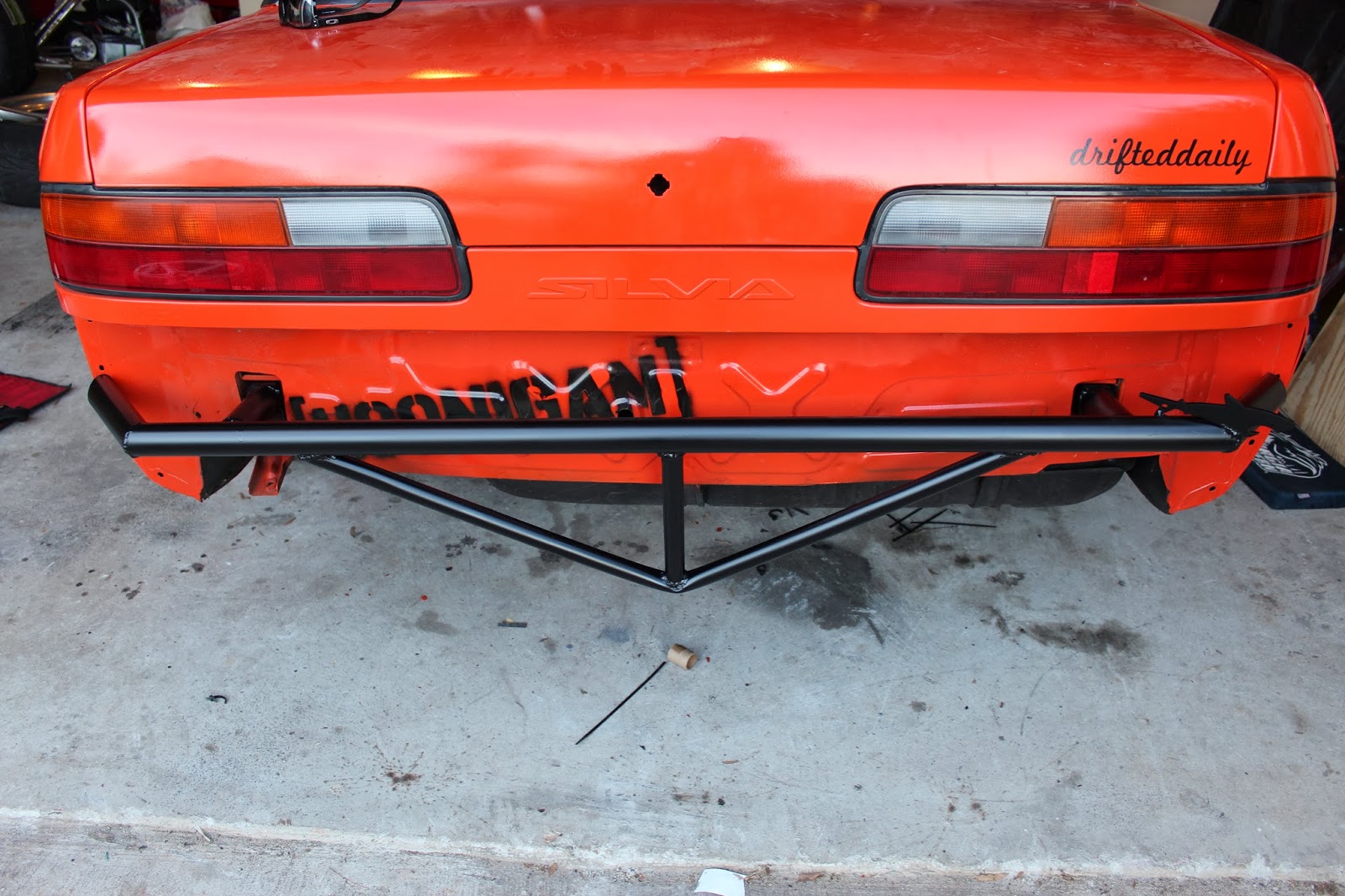 Also finished up the bash bar thats been sitting on the back of the car all rusty for the past year. Looks good now and makes a nice jacking point for changing rear tires. 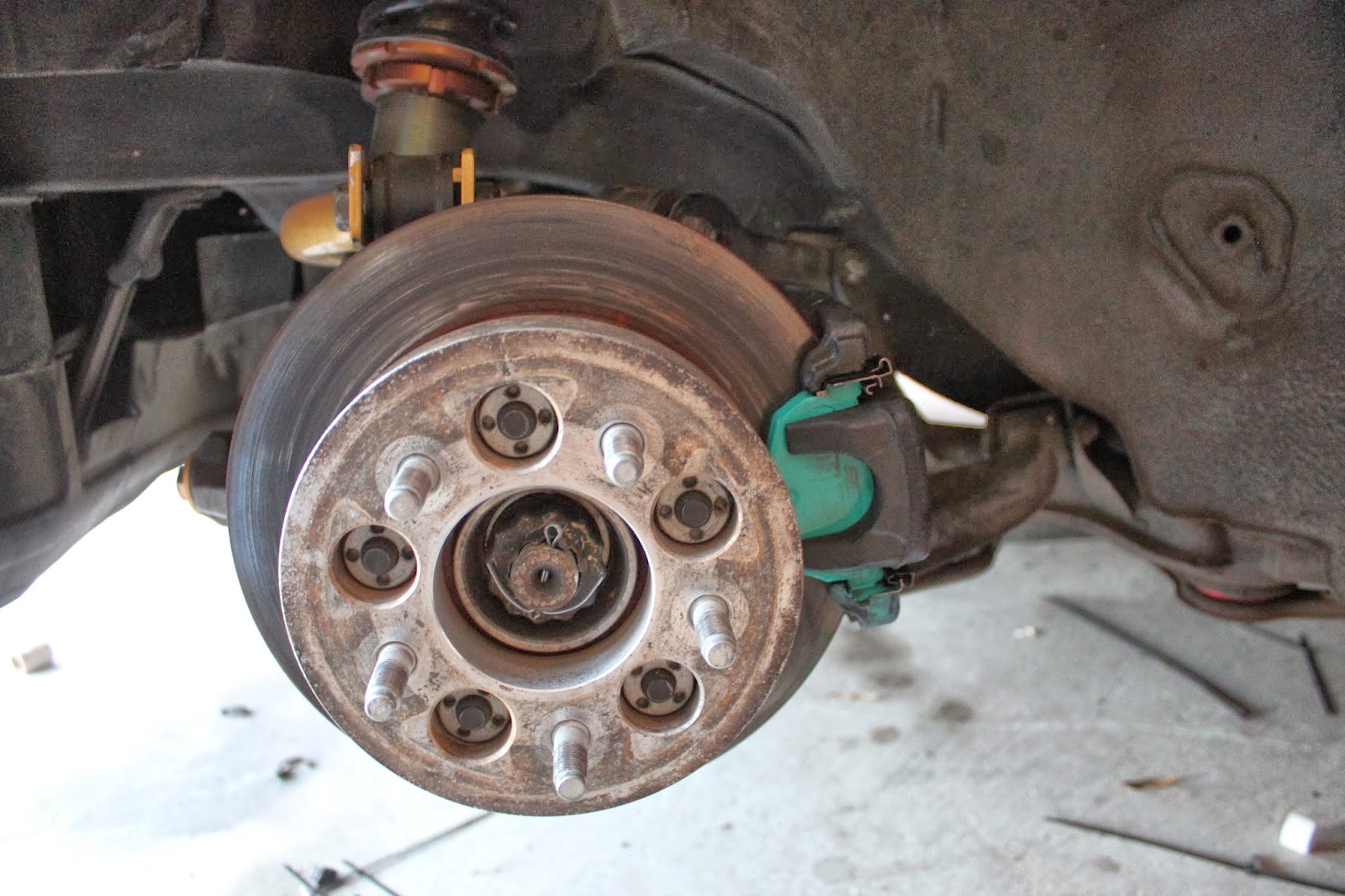 Also threw some D1 Spec Project Mu pads on rear in hopes to get the rear end to lock up well with the hydro, with the old cheap pads it never seemed to work. 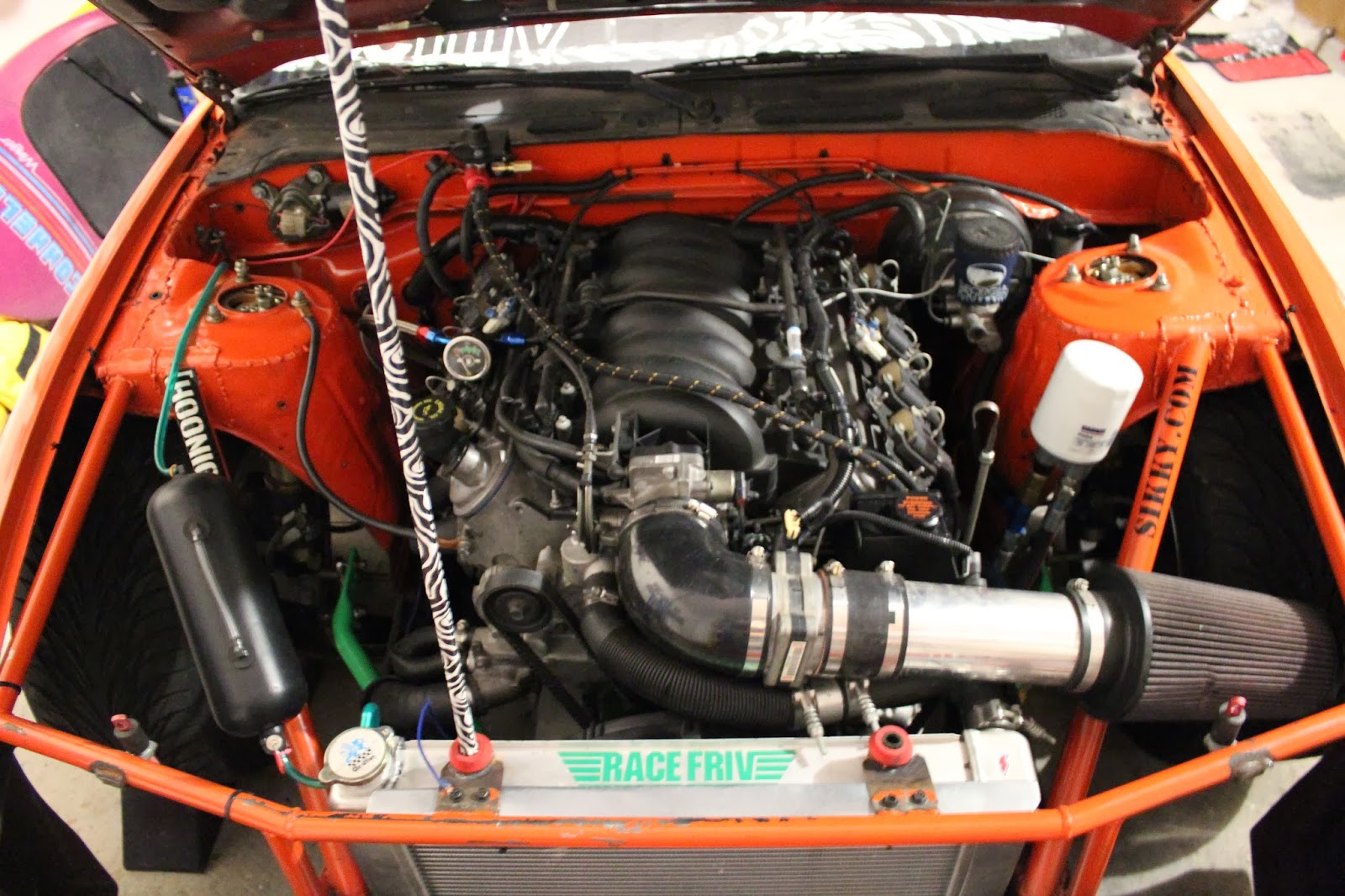 So put everything together and it fired up the first time I hit the button, didn't even need to jump the battery. Let me tell you that is a good felling. 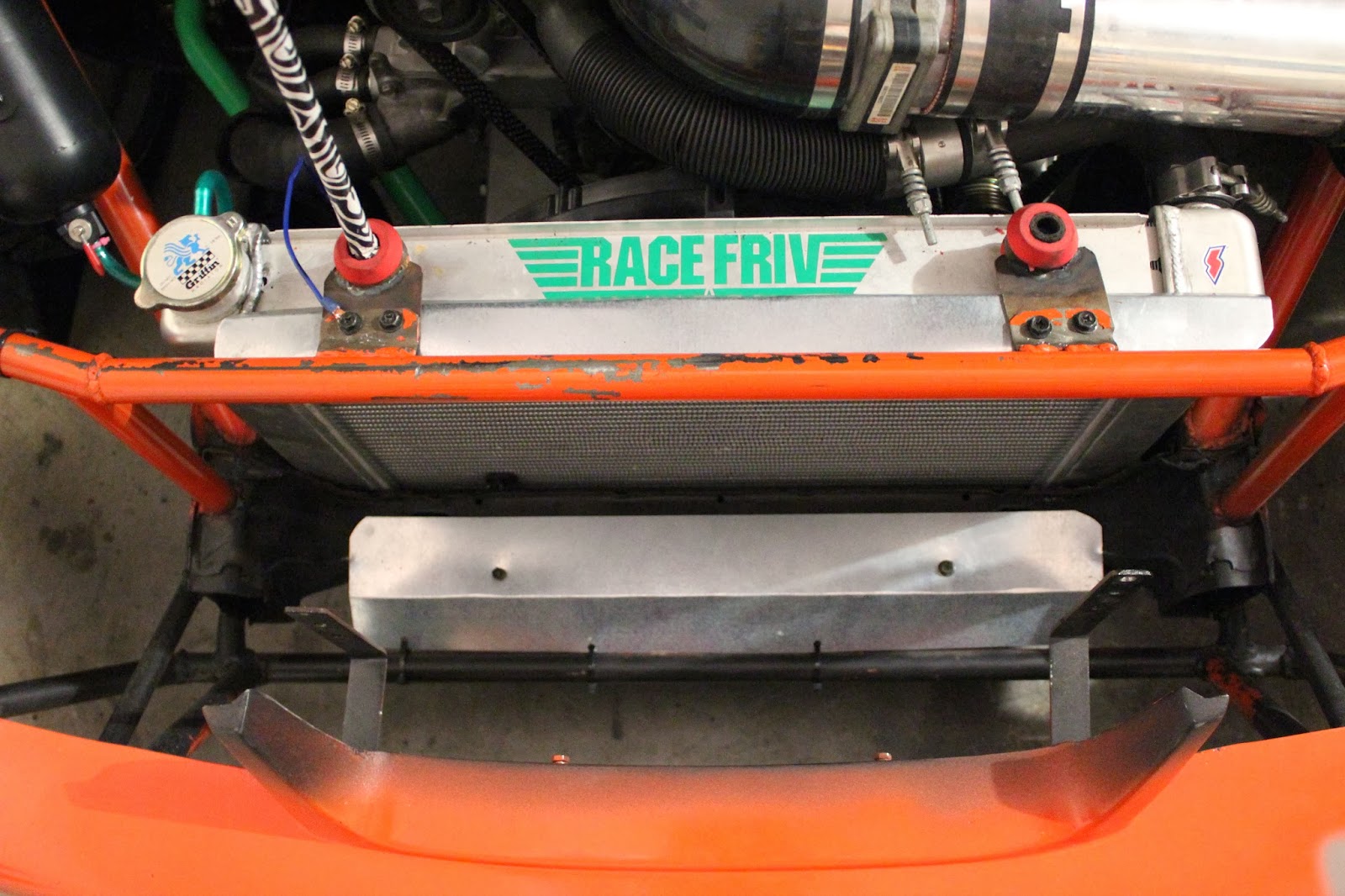 Also kinda tossed together some radiator shrouds for fun on the top and bottom of the radiator, the car never had over heating issues but I know a lot of air is going to waste with this design so I tried to help it out as best as I could with out going over the top.

(also follow me on instagram!)
Later I took it for a spin and terrorized my neighborhood a bit open header style. The new clutch feels great and the car runs like a champ. 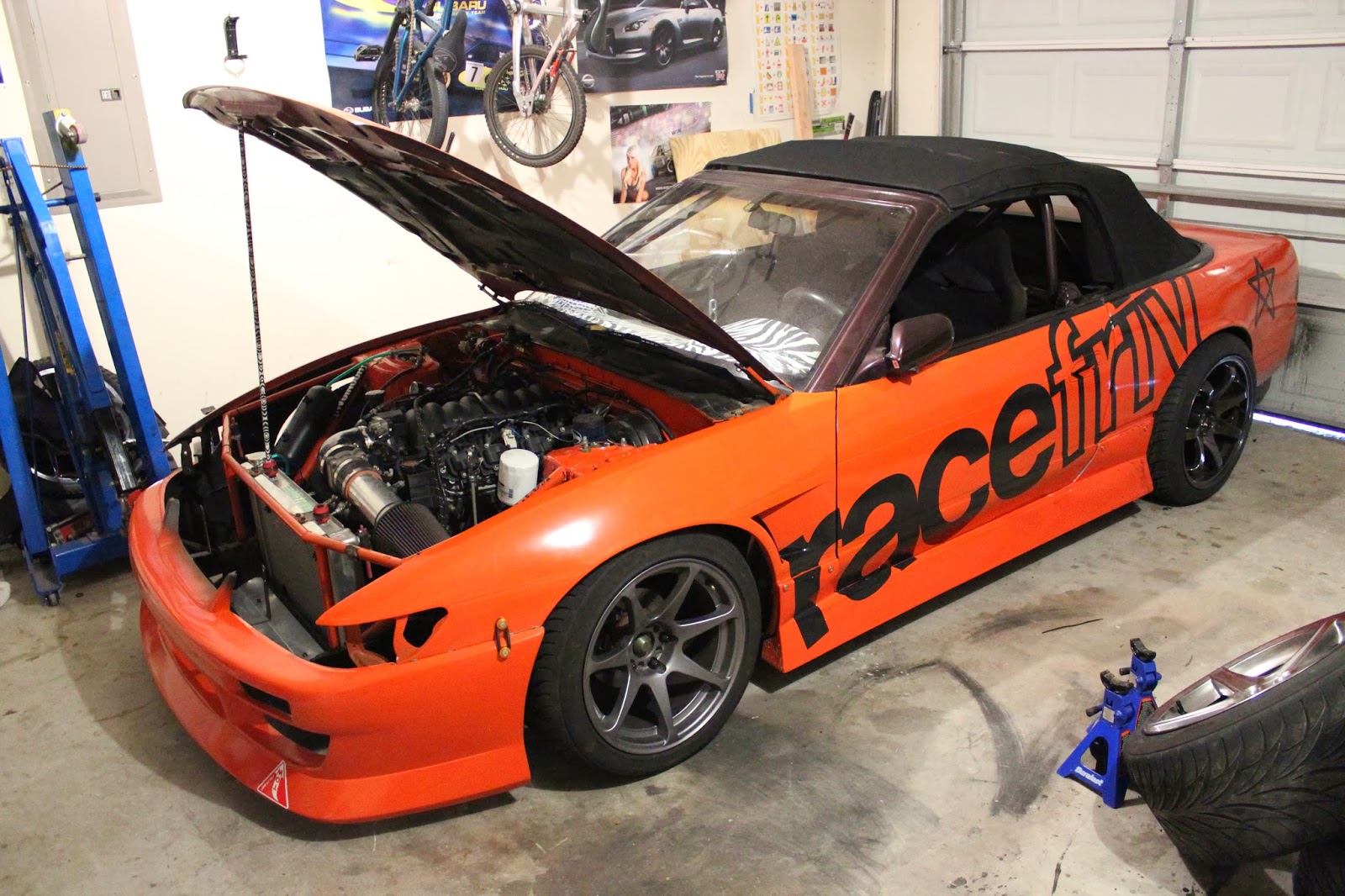 So here is the car in its current state. Ill work out all the kinks and bugs at cordele this weekend and really shake the car down over a two day period. Im stoked to drive this beast again, cant wait to run some doors. Starting to really like the feel of the car now I just need to improve it in the looks dept. Ill paint the windshield loop black at some point and then one day get this things the wheels it deserves, I have always been so worried about building a well running reliable car that I kinda didnt care to much on the looks. Well hopefully by pro/am time I can grab some proper wheels for this thing.

Till next time everyone stay frivolous. Thanks for reading!