A Fine Fairlane From Ford

I love old cars that get driven around on a regular basis.  Probably because my old car hardly ever sees the light of day.  This 62 Fairlane gets a good share of use while the owner Luke works on his other projects.  It tells you a little something about Luke that this is his most dependable car.  Click on the read more link to get on with the story. 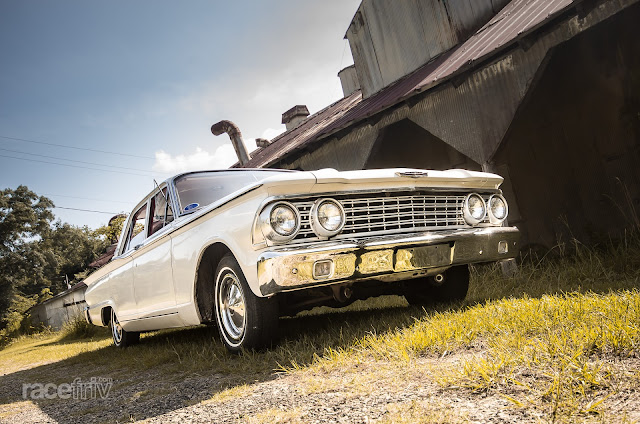 I've known Luke for many years due to our mutual Mustangery. When he told me he had a 4 door fairlane I knew I had to have a look.  I have something of a soft spot for 60's 4 door cars.  I think they are overlooked by the classic market because people seem to want coupes.   Another friend who left the area a couple of years ago had a 4 door 67 Mecury Caliente which he got for $1500.  And not only can you get them cheap you can tote friends who wont need yoga classes to navigate their way into the back seats. 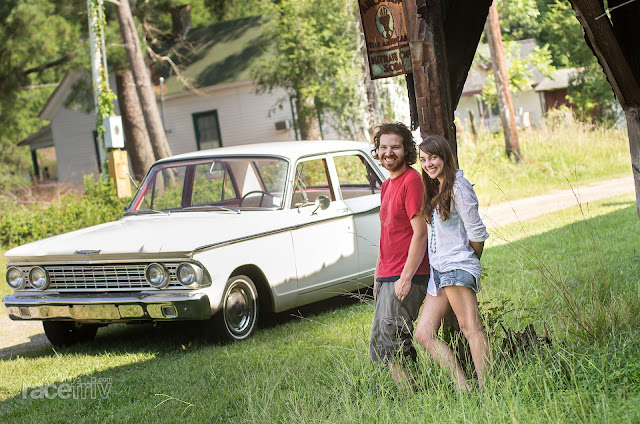 Here is Luke and his roommate Amy.  He tells me she can fit in the trunk without bending her legs.  I dont know why he knows that or why he calls her his "roommate" so lets just leave it at that. 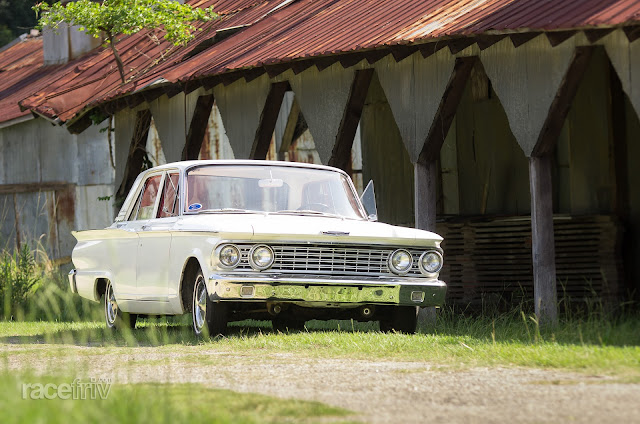 Here you can clearly see the air conditioning fully deployed.  It was 90 degrees and humid the day we shot these and honestly we didn't get all that hot thanks to those quarter vent windows.  When newer cars get old and lose their AC you simply cant get this kind of airflow in the car. 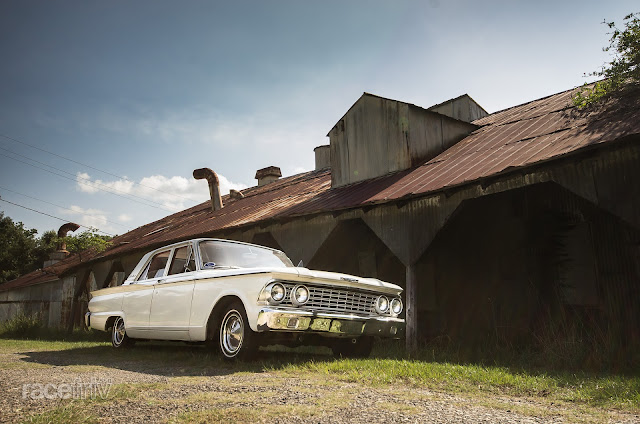 I took these pictures just around the corner from a location used by the Walking Dead TV show.  This is where Rick and the Governor would meet in Season 3.  Somehow a run down old feed mill is the perfect spot for a classic to hang out. 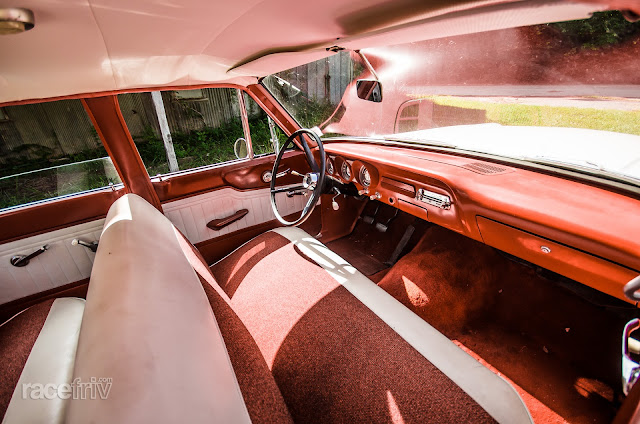 Luke let me drive us to the location which was an experience.  That column shifter works a 3 speed manual transmission - which is also a non-synchro unit.  The clutch is worn out, there's no seatbelts and the car has a 6 banger that would struggle to tug a greased yarn from a cats bum.  I'm surprised we survived the trip to be honest.  Luke is used to it of course.  And as you can see those bench seats do have a charm all of their own. 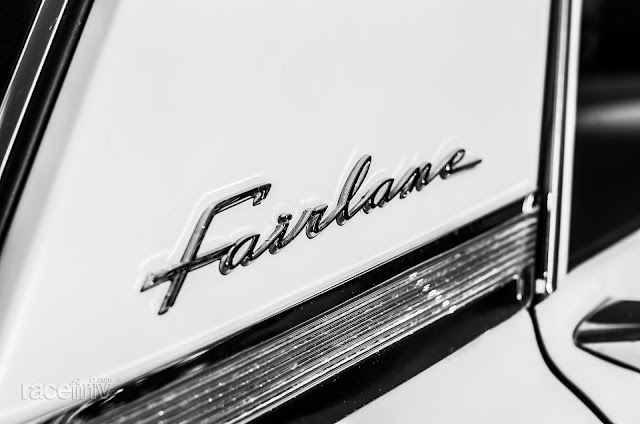 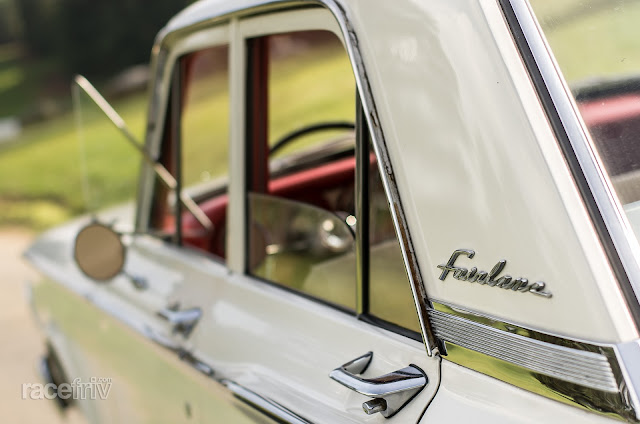 While it may lack some modern conveniences it's not all that impractical.  And when you get down to the chrome plated brass tacks it's just a really pretty car to look at. 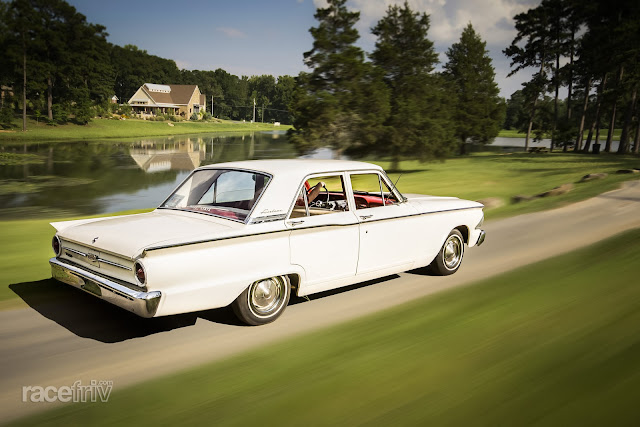 The early 60's saw the last vestiges of the tail fin.  Not everyone is a fan of tail fins or the "jet-age" design cues but I like them and its a treat to see them today in such good original condition. 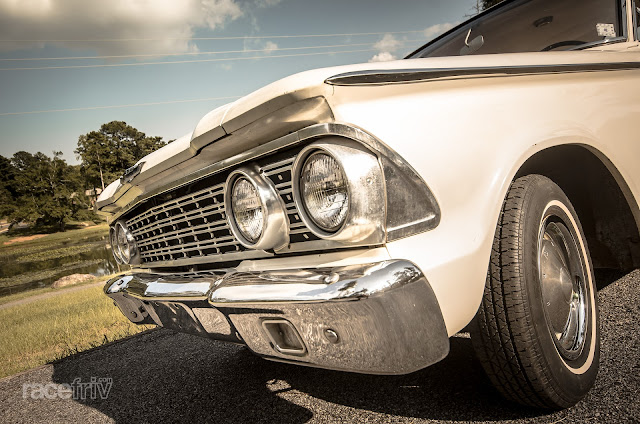 I would have taken a shot of the engine, but we got carried away with cooking dinner and I forgot.  Its a basic 3rd generation 170 cubic inch Ford inline 6, made around 100hp, smooth and reliable but not a hot rod engine by any stretch.  Ford later started using the Windsor V8 and by 1963 you could have optioned the solid lifter 289 which later powered Shelby Mustangs and the early Cobras.  She's got skinny tires and does one wheel fires, but its not for hooning its for cruising.  So thanks Luke for taking me for a cruise and letting me show it to a wider audience.  Stay frivolous!
- Phil B