Hi Phil here again, I promise to keep this short. I'm sure you've seen the meme below or something like it: 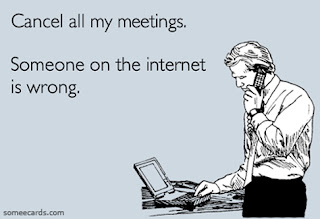 Sometimes I feel like that about fuel octane when I read online forums, or bathroom walls or whatever.  So I decided to get to the guts of it for you so you can join the apparently small and exclusive club of people who know something about fuel octane. Go ahead and do it...click read more and find out for yourself what octane ratings are all about, also funny British people are at the end.

Myth #1
FuEl is BetTerer in JapaN an AusTRaliu or Europes LoL.

OK that's my attempt at humor let me start over.

Myth #1
I've seen fuel as high as 98 octane in Japan and Australia, why cant we get that here in the US where the highest is 93?

Why is this a myth?
Well its all to do with how Octane is actually measured.  Octane is NOT a measure of how many octane molecules exist in a measure of fuel.  Its simply an empirical measurement of the fuels propensity to knock.  If you're not sure what knock is now is a good time to go look it up, see also "Pre-ignition", "ping", "detonation" or "spark-knock".  The octane number is unit-less and simply a point on a scale based on a standard engine and a standard fuel.  the key to this discussion is that there are actually two scales.

Since the 1970's the US switched to another scale, actually the average of the RON scale and the MON scale sometimes written simply as (R+M)/2.  for those less skilled at math when you add two things together then divide by 2 you get their average value.  This new average scale is sometimes called the AKI (anti knock index) its also sometimes called the Pump Octane Number, although to be honest I've only ever seen it shown as (R+M)/2 - something like this:

As it happens for any given fuel there is about a 10 point difference between its reading on the RON scale Vs the MON scale.  Using the RON number makes the octane look higher.  Taking the average means a roughly 5 point difference.

Conclusion?  simple:  93 Octane in the US (R+M/2) is the same from an octane standpoint as 98 octane pretty much everywhere else (RON)

Not so fast you say?  I can only buy 91 octane where I live in the US?  Well sorry if you live on the West coast you may be at a disadvantage.  Some regions stopped using MTBE as an octane additive and it was finally banned in 2003 in California because it causes cancer (not joking).  The whole West coast is affected because many refineries are based in California.  Other mountain regions only sell 91 octane because at higher elevations you don't need the octane due to the lower air pressures.

The Californian refineries could probably find other octane boosters to get back to 93 but they decided it would be so expensive people wouldn't want to buy it, so they settled on just not using MTBE and selling 91 as their top premium fuel.

MTBE is Methyl Tertiary Butyl Ether but you don't really care, all you need to know is that it causes cancer in California. 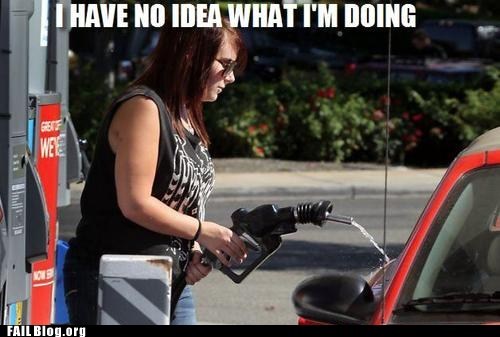 Myth #2
"Don't worry just put some of this Octane additive in, its says it raises your octane by several points!"

OK so this isn't so much a myth as it is a misunderstanding.  The "points" referred to here are actually tenths of a point on the AKI scale described in myth #1.  So if you see a booster that claims to raise your octane by 2 or 3 "points" its practically worthless and is only boosting your pump gas by a couple of tenths of an octane.  Some bottles have this on the small print.

Other bottles actually do claim higher increases, like 10 to 60 points on a bottle of NOS octane booster (its not clear why they cant decide if its 10 or 60 points).  The problem is the additive.  They typically use a substance called MMT. 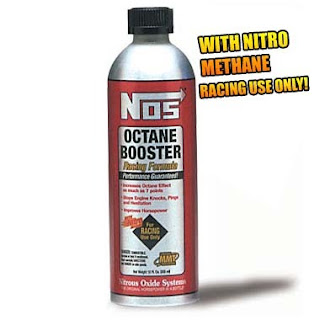 This stuff in concentrations high enough to influence the octane will cause combustion deposits to form in cylinders and on catalysts (most owners manuals tell you not to use it for this reason).  One time use is probably OK but don't make a habit of it.  Besides its expensive, much more expensive than buying the right fuel.  Oh and its highly toxic, absorbed through the skin and can fuck you up (liver and kidney damage) with a quickness.

I think for fun I'm going to try adding some NOS octane booster to some fuel at the drag strip one time just to see what happens.  I mean hey it has NITRO METHANE in it.  Must be awesome.

Myth #3
"treat your car to some premium in the tank every now and then - it's got better detergents in it and will clean the cobwebs out."

This is an easy one.  It's just Bullshit.  The detergent packages are the same for any given brand of gasoline.  They don't even make more money when you buy Premium because it cost them more to make it.  The manufacturers don't care which grade you buy they just want you to buy the right grade for your car.  They don't add extra additives because that would cost them even more to make it and hurt their margins.  Still think premium has better additives?  Hear it from the horses mouth:

If they had some extra benefit other than just octane they would be shouting it from the rooftops.

Sure they like to imply that their version of gasoline is cleaner or better for your engine than the competition (Techron, or shell "Nitrogen enriched") but all grades from a given brand have the same package of detergents. It's even required by the EPA who want your car to stay running clean.  By the way Shell - Nitrogen is in all detergents so every gasoline from every company is "Nitrogen Enriched".  More marketing BS but it sure does sound snazzy.
Scientific American points out that any gasoline with the required EPA detergents added will contain Nitrogen (they also try to scare us into thinking it might cause extra smog which is silly since the NOx in engine emissions gets its nitrogen from the N2 in the air)

Also busted: not having fun while having an impromptu gasoline fight


Myth #4
Leaving the best till last.

"I put some premium in, the car went way faster!"

This one is a doozy.  Lets divide and conquer.

Only cars with a knock sensor can even hope to find any even tiny performance advantages from higher octane fuels than the owners manual suggests.  The knock sensors allow ignition timing to advance in the absence of knock although it may take a full drive cycle for the ECM to do it.  You wont feel the benefit until about halfway through that new tank of gas. In addition many cars timing maps are limited (we have emissions laws people - think of the children!) and won't advance much or any in the absence of knock and will only retard if poor quality fuel is detected.  Most new cars fit this category.

The biggest exception will be modern turbo cars that almost universally have very flexible, knock sensitive maps and universally require premium fuel anyway.  You can get away with running regular because the manufacturers idiot proof the car with the knock sensors to pull timing quickly, but it will hurt performance and could still damage the engine in the long run.  Here's the logic:

If you burn yourself in a fire, you don't run back in there just to see if its still on fire.  Likewise you wont see an amazing transformation in performance as you drive away from the gas station after putting 93 octane in your Tercel.  Also if you own a Tercel, you should probably set it on fire.

I'm going to leave you with a clip of Karl Pilkington (another Brit like me) talking about his superhero fantasy being "Bullshit Man".  if you don't watch An Idiot Abroad you should try it.  Karl is hilarious.