Next up on project scrap metal is a bunch of mods to make it more dependable. At the most recent DSD event I got about three runs in before the car started acting goofy. The scenario was somebody broke down at cordele, a spring fell out of their car (how that happens I have no idea, stupid kids cutting springs), and I let the car idle for a really long time, then shut if off and waited. When I turned the car on I immediately knew something was up, when I went for the run the car started acting crazy and shut off before I could even get moving. Tried to start the car again and nothing...dead as a door knob. We tried all sorts of things but the car was done for. Sad times. The good news is the problem was just something stupid and easily fixed. Click read more to find out what is was and all the other totally awesome fixes I've applied since then. 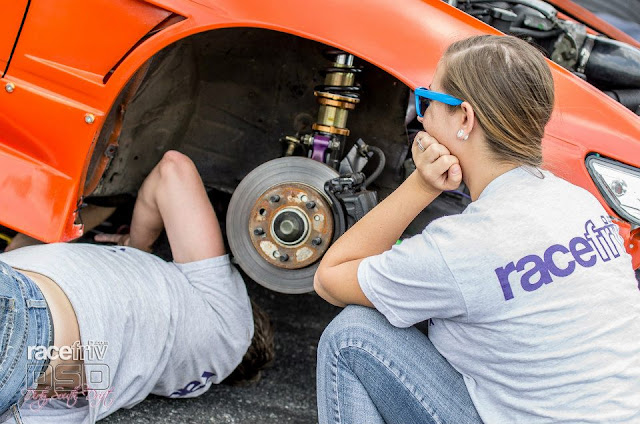 It was - in short, the alternator. Chris Ward mentioned that if the alternator dies on LS motors it totally kills the car no matter what and he was right. I had no real way to trouble shoot it at the time, so we chased our tails for a while to no avail, the car was dead.

Later on when I took it home I started trouble shooting the car and the alternator was the first thing I checked. The tester machine at Advanced auto parts made some hellacious sounds when they tested it and it didnt even pass the first part of the test. The alternator was dead, it was the only thing I didnt buy new for the engine when I swapped it, and look where it got me. The good news though was when I replaced it, it fired right up, no issues like nothing ever happened. With that load off my back, it was time to improve the rest of car. 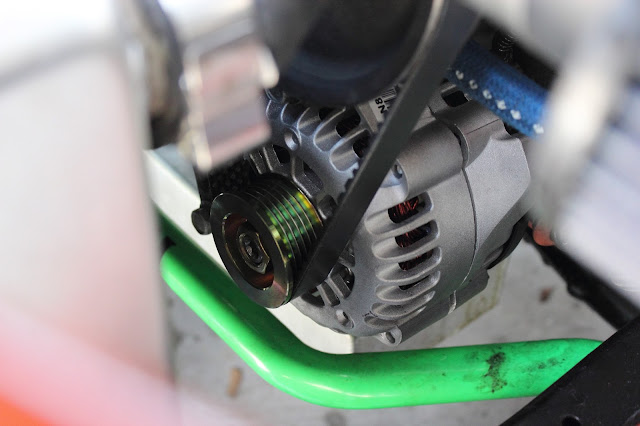 As you can see up above there I slapped a brand new alternator on it, hopefully it will last me for a while and at least it wasn't a expensive fix. 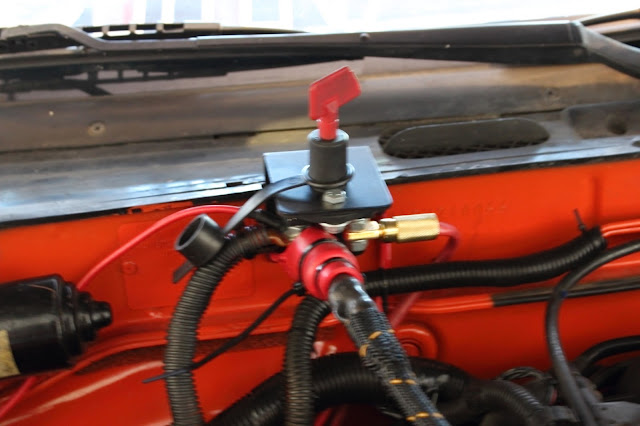 With a new alternator came a new cable, instead of the cable running to the starter then to the switch I ran it strait to the back side of the switch now.  From what Ive heard this will help keep the alternator happy, and also makes my switch actually work now. The wire coming from the bottom of the pic is the alternator wire, not as clean as Id like it but it works. 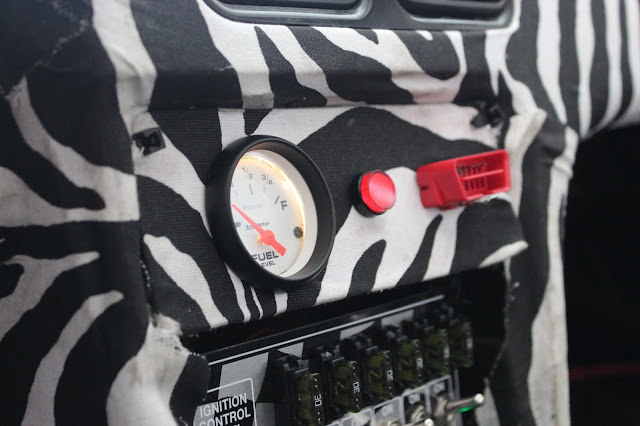 So when everything went to hell on the car I felt pretty stupid for not having any way to troubleshoot things, so I decided to fix that. I made myself a little troubleshooting panel that goes like this: Is it out of gas?---->Is the check engine light on?-----> Check the codes and see what you got. 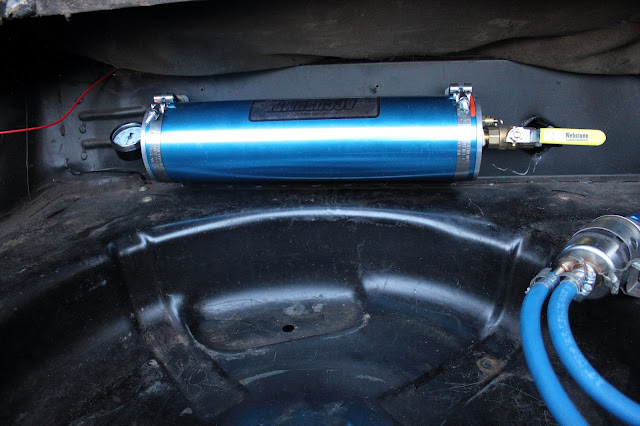 I installed an Accusump to keep the engine happy and trouble free on the oil side of things. The Accusump is an incredibly simple device and works great. There is a small bladder inside that cylinder that's pressurized with air on one side and pressurized by the engine with oil on the other. When its pressurized with the engine oil it keeps around the same pressure your oil pump makes. When you have an oil issue, say it grabs a gulp of air while drifting, the accusump contains around 3 quarts of pressurized oil and sends it to the motor.  this way the engine never loses pressure. If I don't close the ball valve when I shut the car off it gives me about 30 secs of oil pressure before the gauge reads zero. Its a  pretty handy device and cheap insurance compared to the cost of an engine. 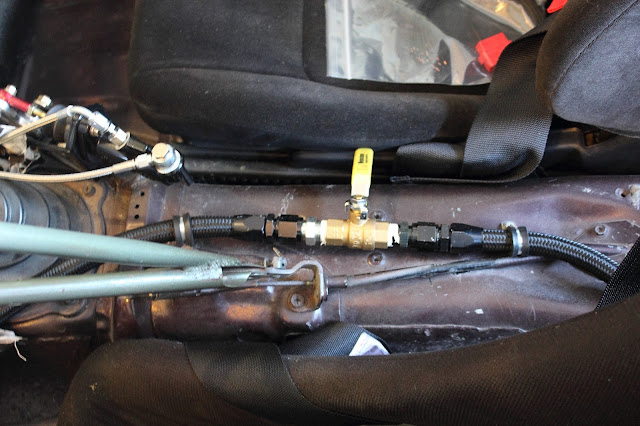 Since I mounted the accusump in the trunk I installed a ball valve next to the driver so I can cut it off before the engine is turned off, this holds the pressure for the next time I start it. 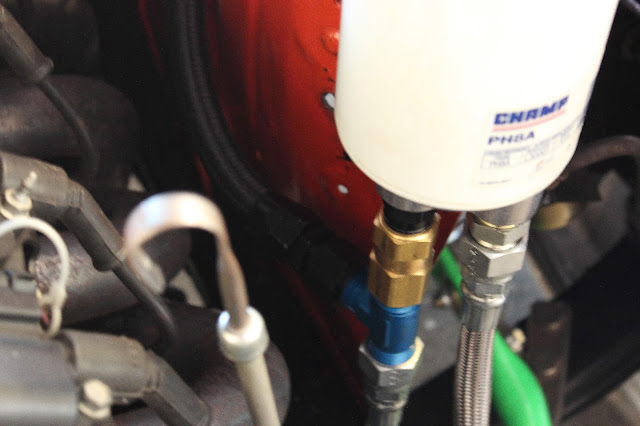 I tee'd the accusump into the inlet oil line for the engine, the brass fitting there is actually a check valve so the accusump oil only goes into the engine instead of back through the filter. 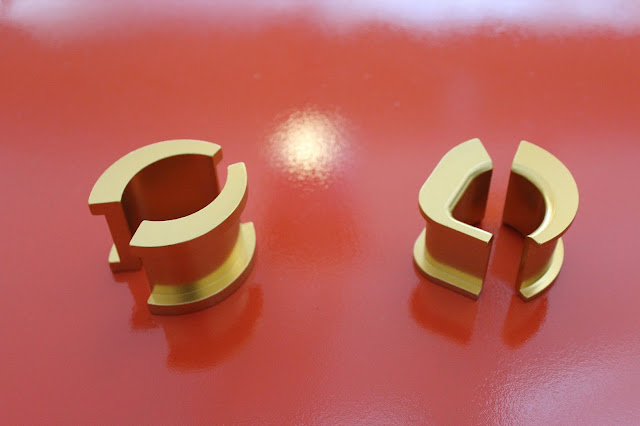 Next up on the list of improvements are some solid rack bushings from Max Parts. My polyurethane bushings turned to crap in about 3 drift events for some reason so I ordered these solid bushings. Not only are they aluminum therefor super strong, they are off-center to match the cut knuckles I have.. This will give me the correct ackerman angle and keep the rack from going over center since I cut the bump stops. Yay for cheap angle and yay for correct steering geometry. 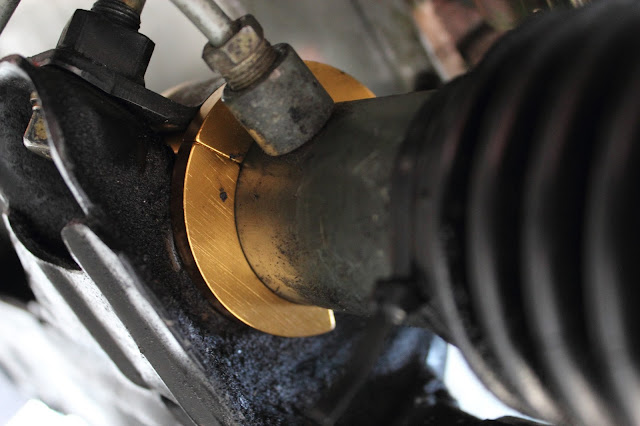 I also added this coolant catch can (below), as my energy drink NOS bottle was melting from the heat. 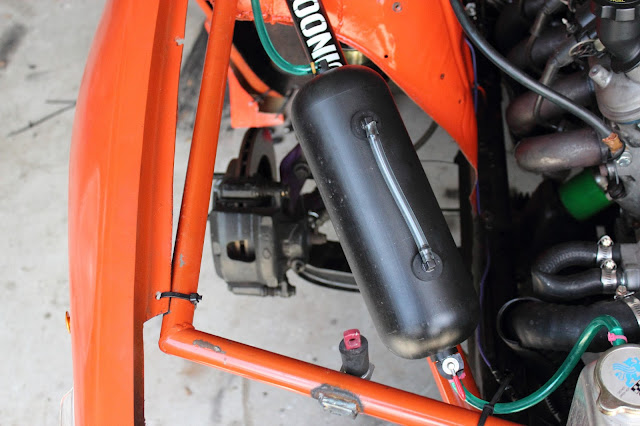 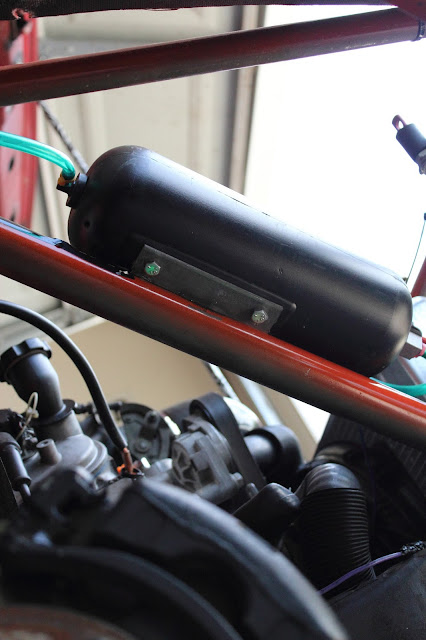 I just welded a little tab on the strut bar and bolted it to that. Pretty nifty. 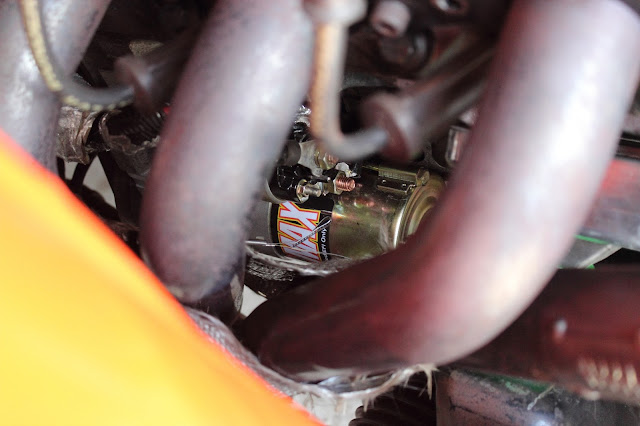 Also along these lines I picked up new starter since I wasn't so sure about the last one, Summit took the other one back no problem so I got a smaller one that can be taken off a little easier. 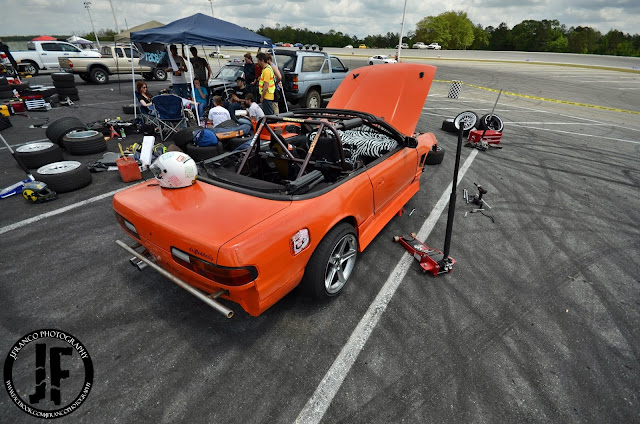 So hopefully at the next DSD event we will avoid pictures like the one above.  Its been too long since I've slid and I'm super stoked for the next event (June 9th, Cordele).

Thanks for reading everyone!! Till next time. Stay Friv.