So I'm going to go ahead and give you the tl:dr right here. Import Alliance was HUGE this year, it was much more organized at AMS than it ever was in the Atlanta locations. Besides one small wreck everything went pretty smoothly for a car show with around 1000 cars. So you get the  idea, now I want to talk about something else, something else I noticed when looking through all the pictures I took. That something else is called character. A lot of sites describe how unusable a car is on the street, that gives it character, how much of it is zip-tied together, that gives it character, or how many times the oil pan has been busted, which is stupid, but character none the less.

Today I wanted to talk about real character, that little thing you can't really put a finger on until you see it. That special charm that certain cars have even if they're not the baller-ist cars on the road. What better way to do that than with the pictures I took of the massive IA meet. That explains why I picked such a strange photo for the cover and why you're about to click read more. 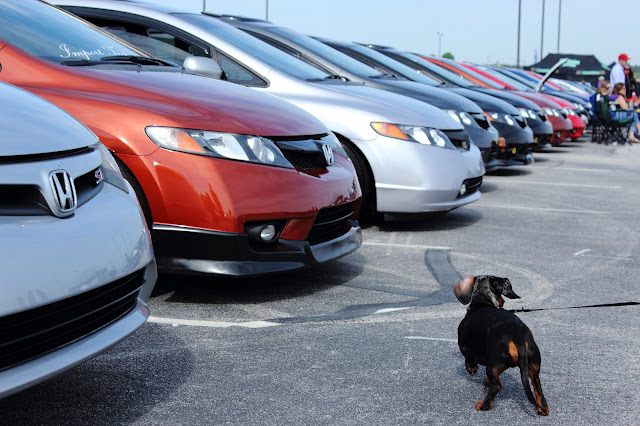 OK so character! Some of you may be thinking "What the fuck is Ish talking about?", or "I just want to look at some car pics before I get bored and find myself in the deep web again."

Hear me out. Cars like the one above and the ones below came from the same production line around the same time, maybe even got shipped over on the same boat. They could have sat next to each other on the lot when the 16 year old girls picked them out. But look how different they are today. 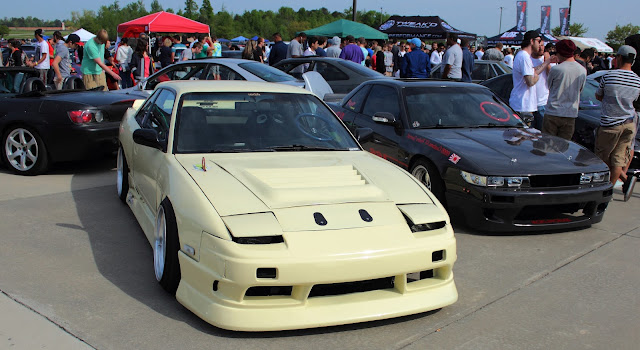 It's not just being different gives a car character, though it helps, it's all the little things that add up to the big picture. 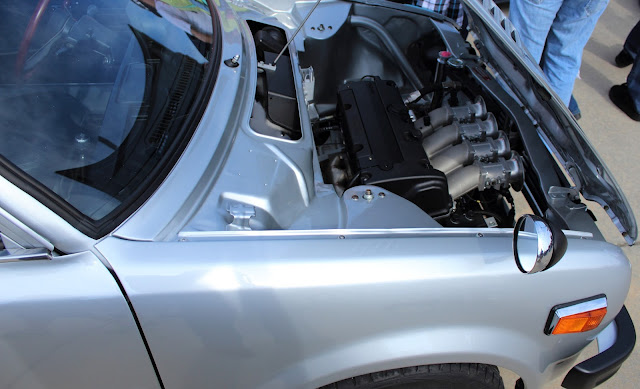 Take this K swapped 1st-gen Civic for example. The swap is so clean it looks almost stock, that's attention to detail! If a car can pull off this kind of swap and not look like a ragged heap, to me that's character. I'm sure when this little Civic pulls on your 'Vette in the highway you will chuckle to your self and think damn that's a fun little ride. 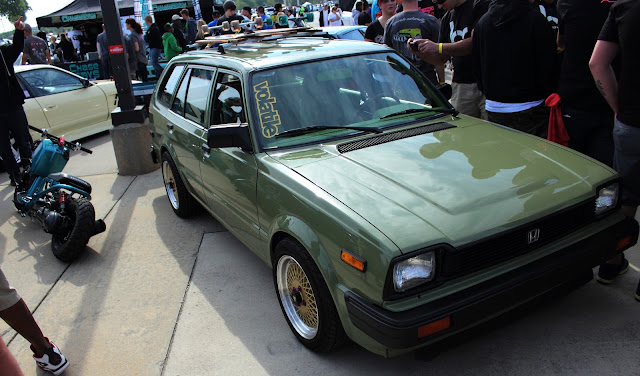 Speaking of character here is the character himself, Rutlege Woods 2nd-gen Civic wagon. With the nicest green/plaid interior I've ever seen, probably one of the nicest 2nd-gens on the planet. 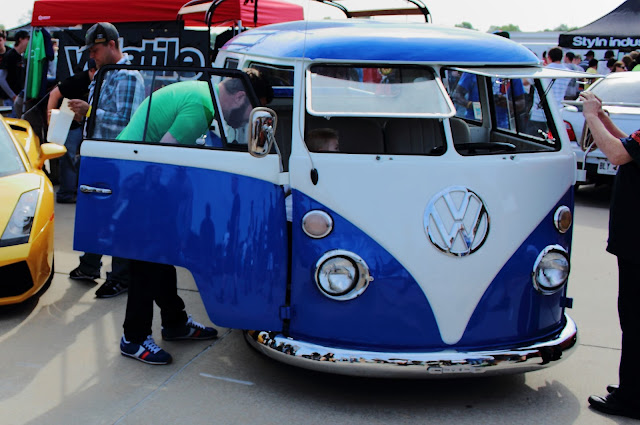 Rutlege also brough out his VW Bus/truck thing with is just about as badass as it gets in the character dept. 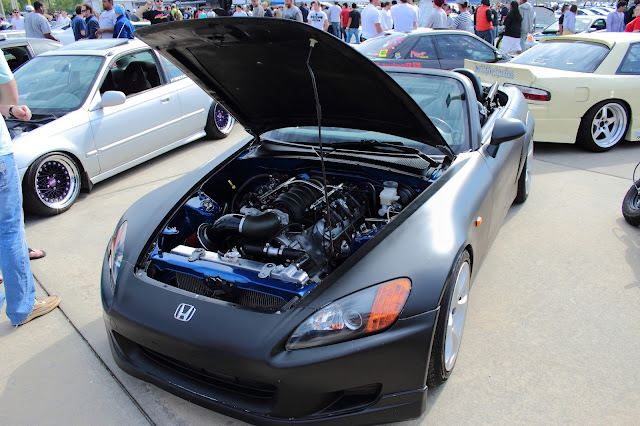 So moving on....to a flat back S2000 with an LS2 swap. I bet this thing fucking screams and I can say this cause I know the LS sound with the top down is pure automotive joy. 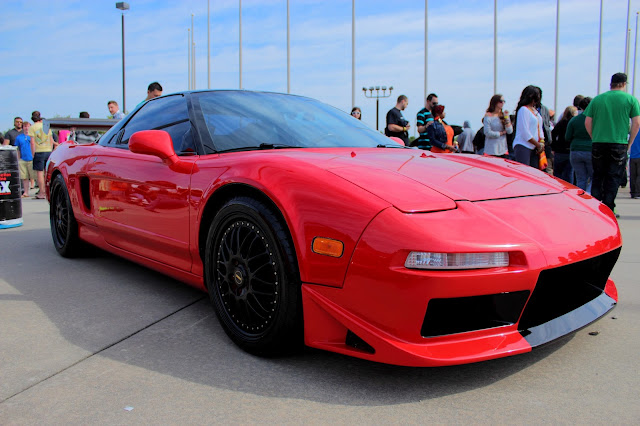 NSX's have a ton of presence where ever they go, its kinda odd when you think about it. How could a 20 year old Honda make you break your neck every time you see one? How is that possible? As Bill O'Reilly would say "You cant explain that!" and neither can I. I just chalk it up to the character of of the NSX. 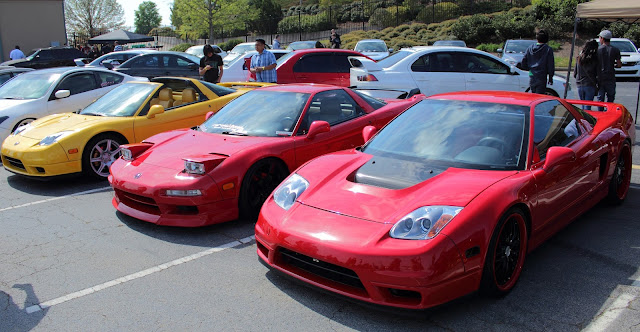 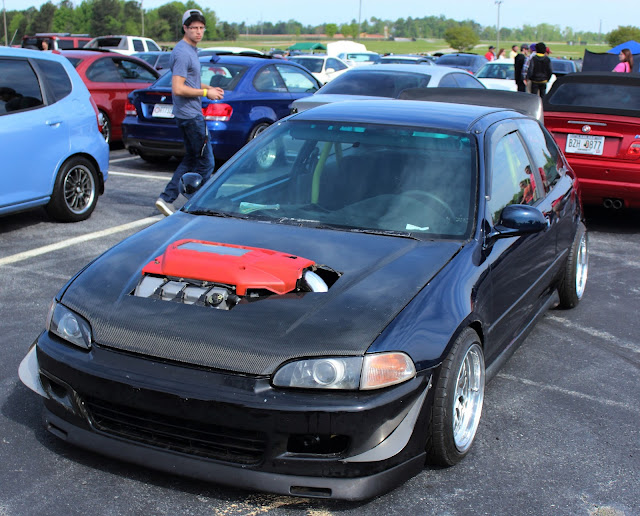 Civic hatch...Boring.....Civic Hatch with V6 sticking out of the hood...road car win! 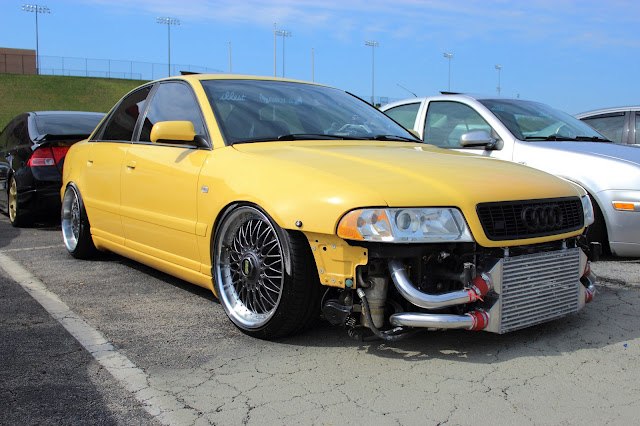 The strange thing about character is that sometimes looking worse is better. Would I have taken a picture of this if it had a bumper? Probably not, something about a huge intercooler from a twin turbo intrigues me and had it had its natural cover I would have just passed it by.  I'm glad I stopped to take a look. 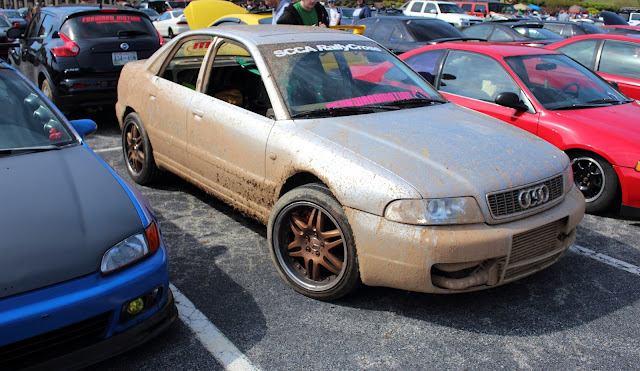 Speaking of Audi's with character, check out this fine example of a German mullet complete with mud paint scheme. The interior was completely stripped and looked like it was raised a tad. Rally Cross Audi? hell yes. 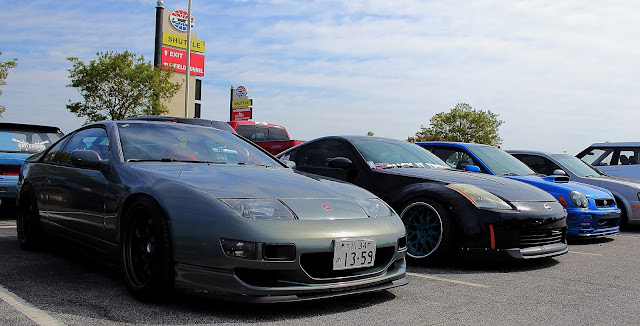 Some of the racefriv crew above, I know these cars personally so to me they have plenty of character. 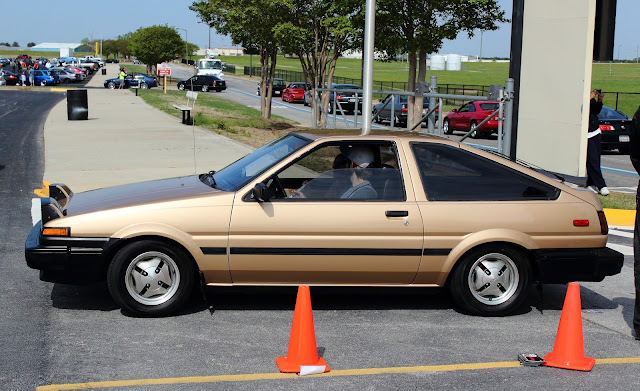 The 86 is one of those rare cars that even in stock form you stop and take a look at it. You're not sure why, maybe you want one, maybe you just never see them anymore. Or in the case of this one you cant believe your eyes because its still stock and there's no way that a corolla that clean is real this side of 1989. 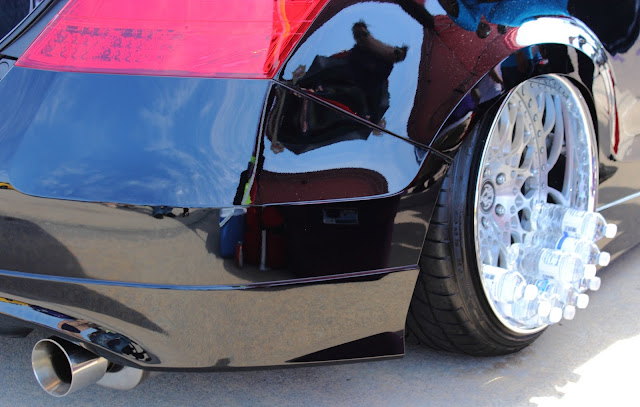 Stance so hard you can use it store things? Fine by me. 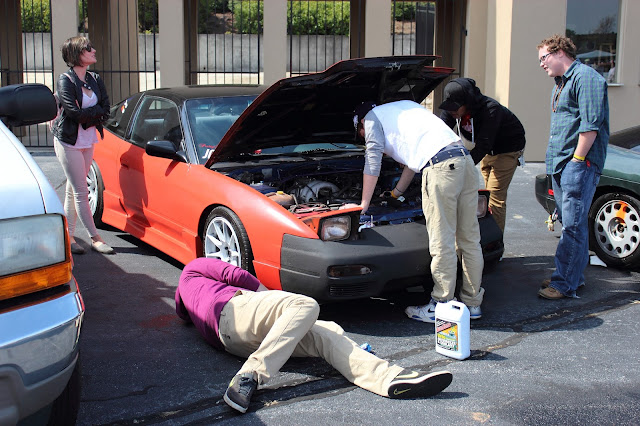 The picture above sums up a 240's character perfectly for me. Somehow, even though it's different colors, it's still badass. Cute girl standing near it, you're laying on the ground trying to see whats broke. Your weird curly haired friend is standing there wondering how the fuck he's going to get home now, while some other complete stranger that probably owns S13's trys to help. That's character. 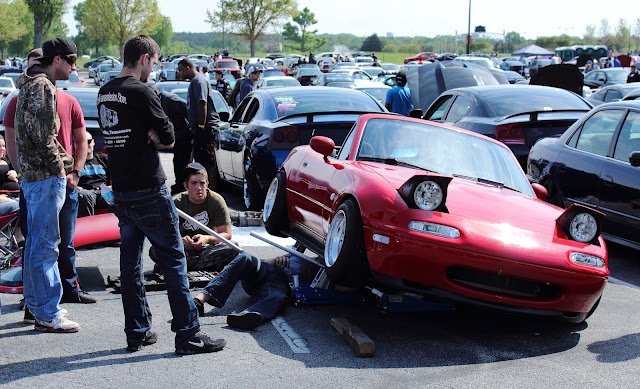 Miatas have it as well, and in heaps. Its hard to explain to a normal person why you would enjoy driving a Miata based on numbers. Its RWD, its a vert, most are sticks, and they weigh less than shopping cart. 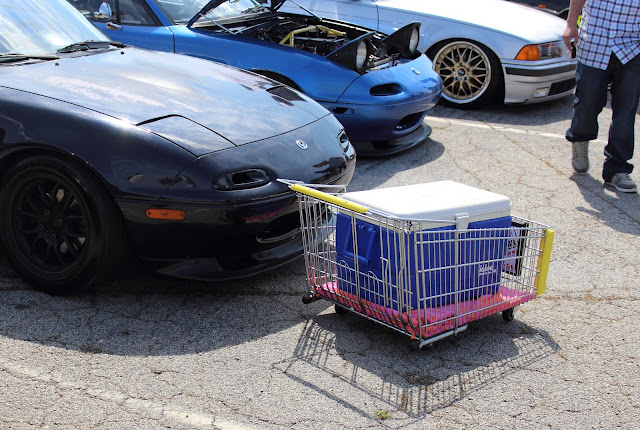 Wait did I say shopping cart? I meant....never mind. 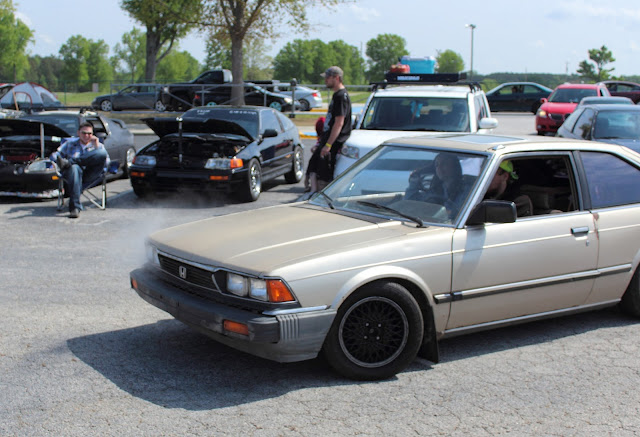 When your car blows out a ton of steam when you pull up to the car show, that's character. There's a love and hate relationship when you have a car with character. 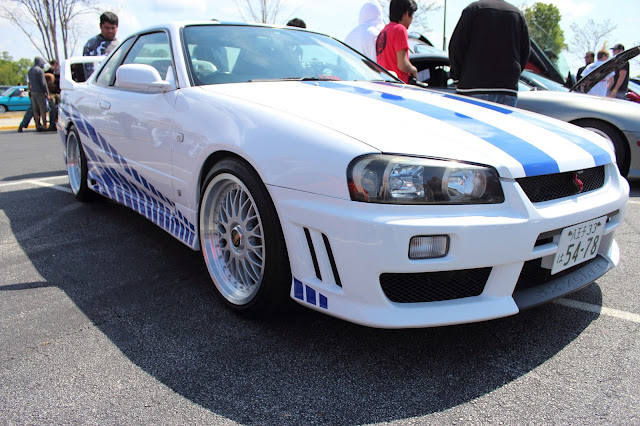 It kinda blows my mind that someone would go through all the trouble of driving an R34 over here, just to put the Paul Walker "I like the tuna here" vinyl scheme on it. But do I enjoy it, hell yea I do. 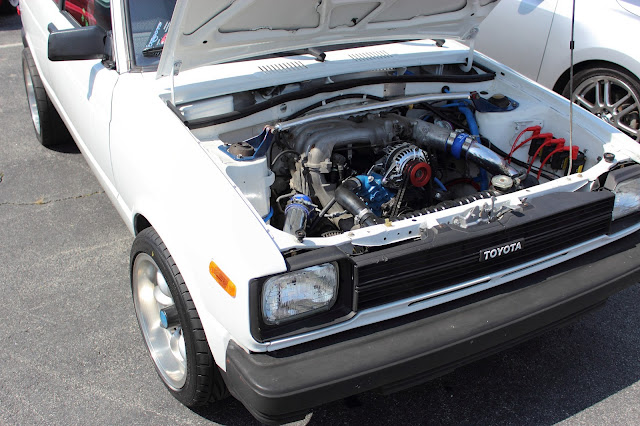 Great Odis Raven! A starlet with a 13B Rotary in it. Boss. 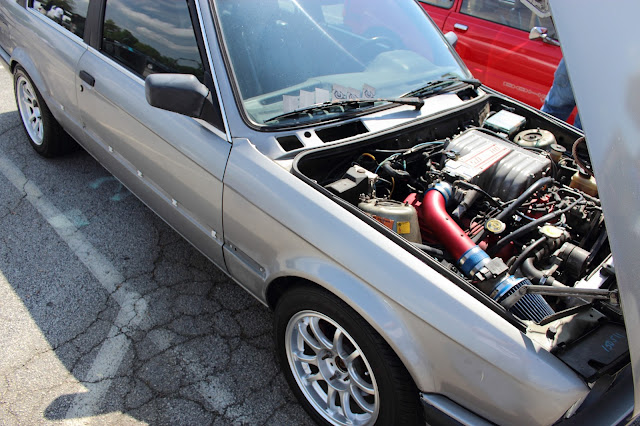 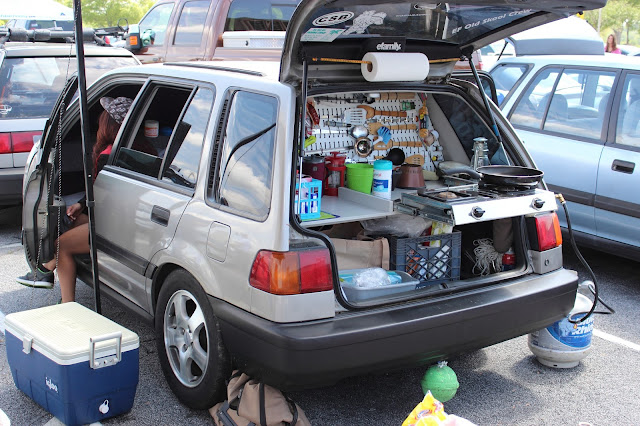 This was the coolest car in the show to me. Sure there were V8 swapped 240's, stupid clean NSX's, Silvia's, a million S2000's, and some really cool German stuff. But what really takes the cake for me is this civic wagon made into a camper sort of thing. Things like this blow my mind, outside the box, totally useful, original and totally something James May would make on Top Gear. 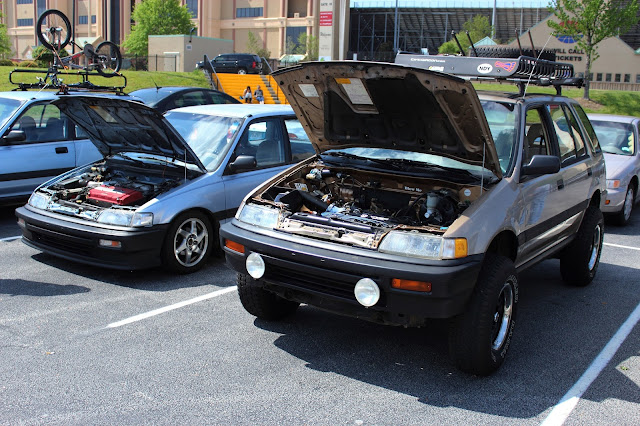 Also If you don't know a lot about the late 80's Civic Wagons you really need to read up on them. They are pretty badass!!

Alrightly! I took a ton of photos here but instead of showing you the same old stuff I went for the random gems that peaked my interest. Maybe I'm just a strange dude with strange taste but hope you enjoyed the post!!! Till next time everyone!!