So its about time I write a little update on project scrap metal. So were at part 7 now? Crazy how far I've come!  Since we last talked there was another drift event at my local track (AMS) and as normal I busted ass the weeks before the event to get there with a working car. The last time we talked I had a moving car that needed a few tweaks to get it in shape. This time I started to chisel away at the little things the car needed to be a truly badass drift car. Click read more!!! 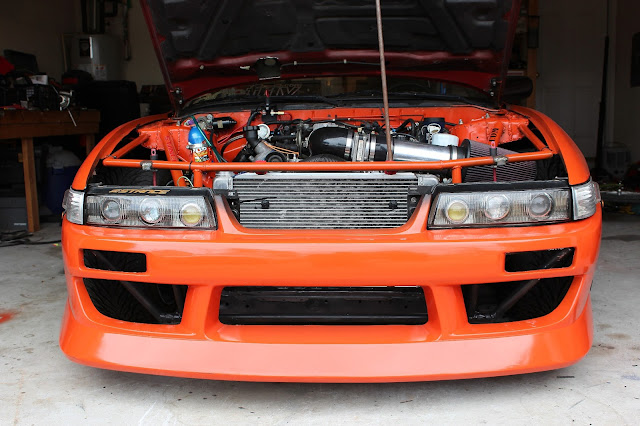 As you can see I put the front end on, which came out pretty good for me welding and painting everything on the fly. The hood is a legit metal Silvia hood, the lights are the triple projectors, and the front bumper is the cheapest thing I could find on amazon. For being the cheapest bumper on amazon it is really high quality and very well built. At this point I'm not to concerned with the aesthetics of the car as I just really need to get a good chassis that I'm comfortable with in a hurry. 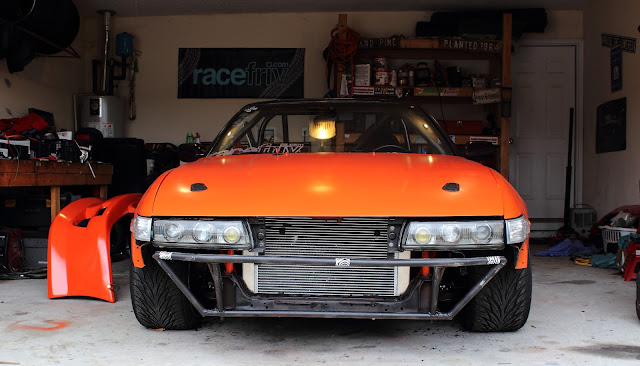 Speaking of the front, I rebuilt the front end with a new bash bar setup that will be much easier to get on trailers. 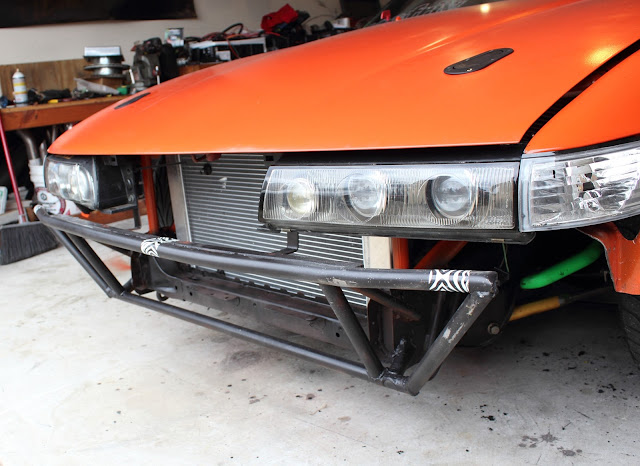 I also added some length to it so it covers more of the front end. It sticks out past the head lights about 2 inchs and is much stronger than the past version. It fits the bumper just right as well which installs with two password JDM oring attachments. The hood as you can see is held down by two flat hood pins. 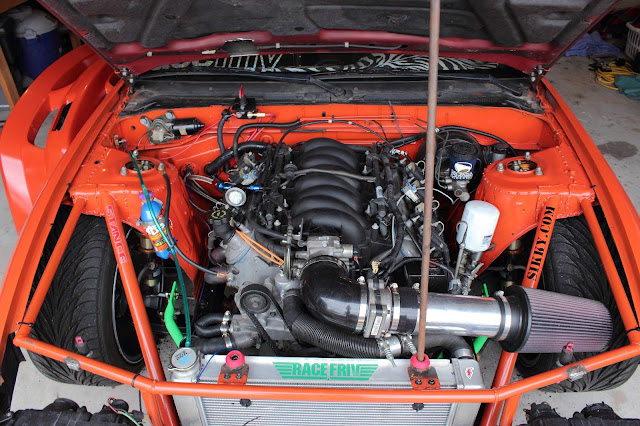 Let's get to some engine shots! I didn't have any clean engine photos last time so here are some better shots of the setup. Its your typical LS swap with a few of my own touches. It's a very simple setup with not too much to break. So far it has been very easy to work on especially since I tubed the front. 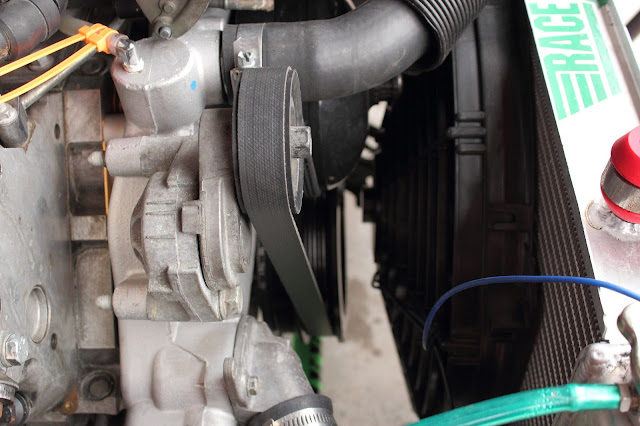 Here is a little close of up of the SLP underdrive pulley, the fan setup and my steam vent addition into the waterpump casting (orange zip ties). Drilling and tapping an important part of your motor like the water pump was pretty nerve racking but I took my time and it came out pretty damn well except for the fact that I didn't put hose clamps or zip ties on the hoses when I went to the event and it blew off and sprayed coolant everywhere.. Lol's were had and I slipped the hose back on and threw on some zip ties and rocked on to the event. No big deal. The idea of this steam vent is that it gives the motor somewhere to relieve the air pockets that can build up within the motor, a lot of people just cap these off. The proper way of doing this is to put a catch can at a higher level but mine hasn't had any issues at all with coolant temp (its normally around 190 and never goes past 210) so I'm going to keep it nice and simple like this. If temps start to creep up on hot days ill add in a swirl pot/catch can type of thing. 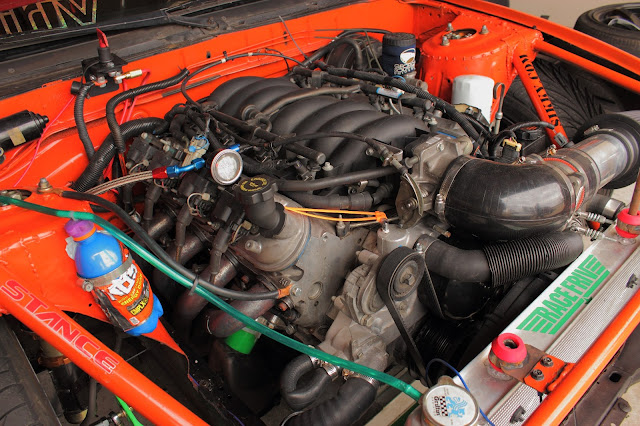 Little side shot of the setup. NOS energy drinks clearly did not design their bottle to be a coolant catch can. Ill have to replace it with,... you know, a real one at some point. Poor guy is pretty melted. 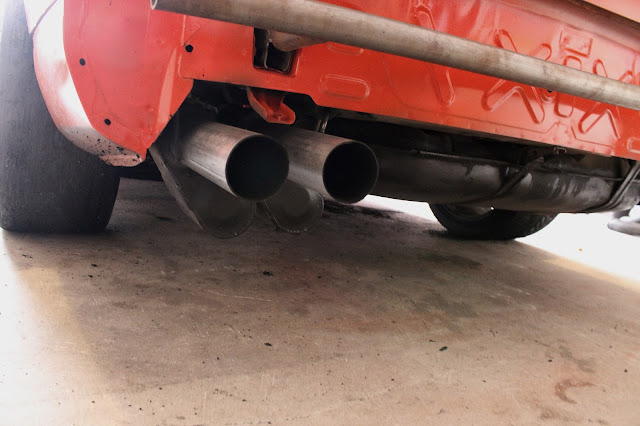 Got a local company to build me a custom exhaust for the car, the last one I made wasn't really up to my standards. Since I cant mandrel bend things myself I had to take the car somewhere for the first time. It came out well though and now its 3" true-dual all the way back. It sounds like a herd of banshees screaming though a loud speaker. 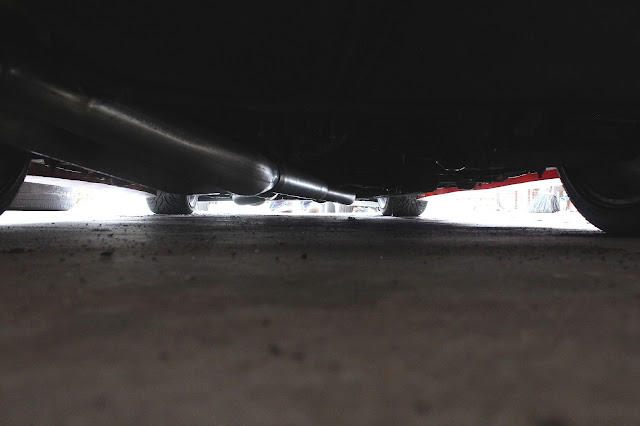 Of course the main reason I got a new exhaust was that mine was way too low and scraped to the point that it was a bit of a safety hazard, this one is super tucked and I have no worries for the future. 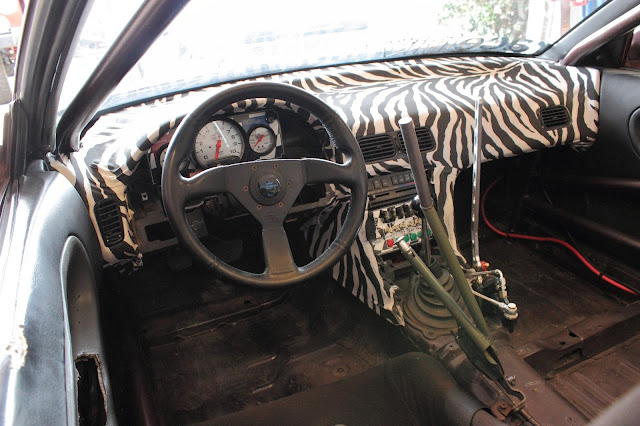 Also last time I skipped on the interior shots because I'm going to make a little better setup in the future but since I haven't started on it yet, Id thought I'd show you what I'm running for now. It's a "quick car" setup for the gauges and switches, its quite cheap and simple, just the way I like it.. The gauges are mechanical which suck but they do give the added bonus of working even if the power is off so I can check on temps and pressures even if the power fails to the cluster. Dealing with oil and the stupid temp wire thing in the cabin is just a pain, but this will work till I can save up for a STACK electric display. I want one soooo bad but they are around $1000 so I'll have to wait. 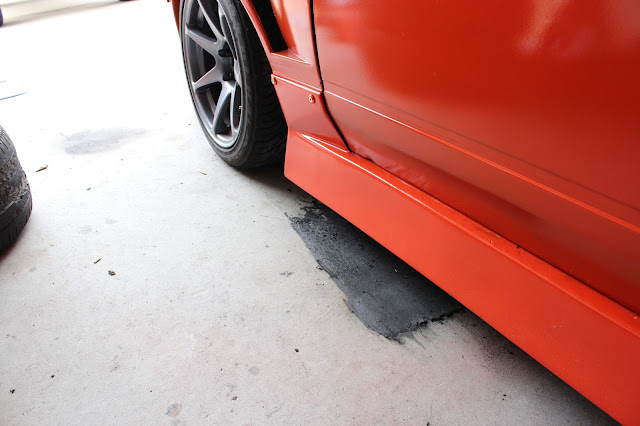 Also threw my side skirts on the car, they are a totally unknown brand. (which would actually be a pretty cool brand name come to think of it) Got them from Greg from S3 magazine along with my new seat, which may or may not be a real spoon seat. Its carbon kevlar and hella comfortable so whatevs. Also you can see my burn out from the video there on the floor.Yea its permanent and the garage, a week later, still smells like smoke. 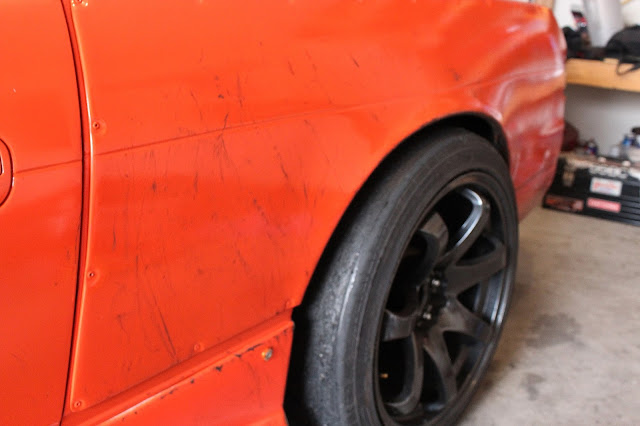 A little bit of small damage from the drift event, a tire came apart and tiger striped the rear fender, but it will buff out! 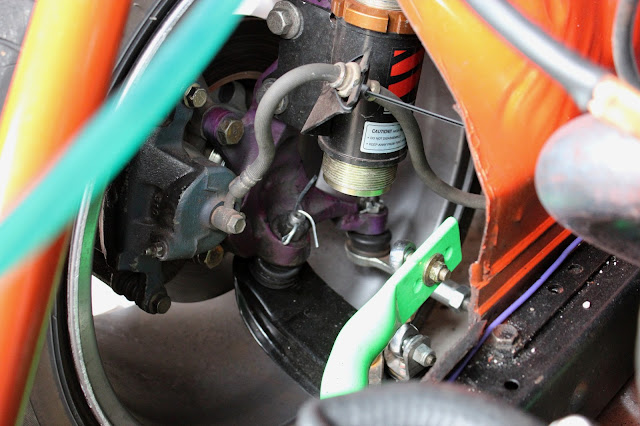 Also got a hold of some purple uprights from JJ Alfano, he used to run these on his Pro-Am car and I believe so did Chris Ward who is now currently in FD. So these uprights have a lot of history Ill have to make sure I use their good mojo.  They are mostly pimp stock uprights but the steering has been chopped and lowered for less lock to lock and higher steering angle. I got some eccentric rack bushings on the way as well to help the slight over center issue I run into at super low speeds. Also I got the sikky sway bar (green) setup in the middle hole to help learn the setup. As of right now I have the tiniest under-steer at low speeds (due to the welded diff) anybody know if I can knock that out by changing the sway stiffness? 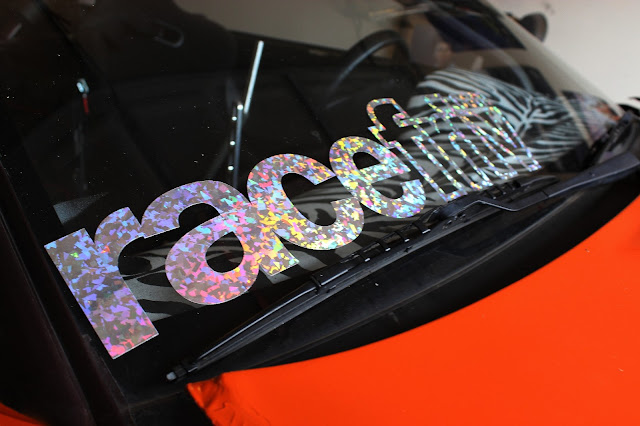 And of course I had to rep a new sticker for the car! So how did the event go? 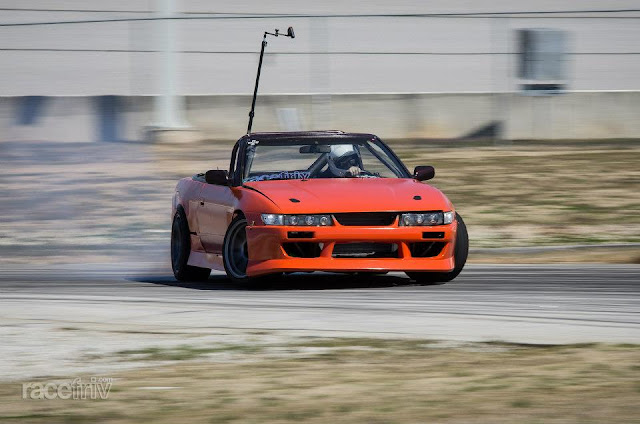 It went awesome! I ran tandems all day and killed it on the media lot. The road course gave me a little trouble at first cause I was being a wuss and not manning up on the entry but once I started to whip it early I started to really kill it. 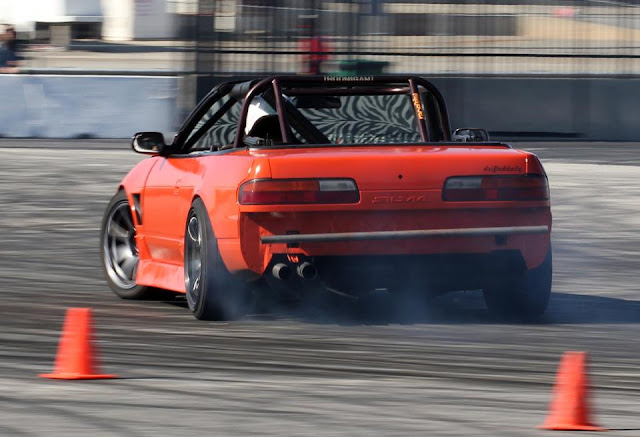 The zebra print in the dash is kinda in the way when the sun shines on it lol, but it does look bad ass in photos.

The racefriv crew came out and we killed it for most of  the day, luckily neither Tim, Devin or I had any major issues!! 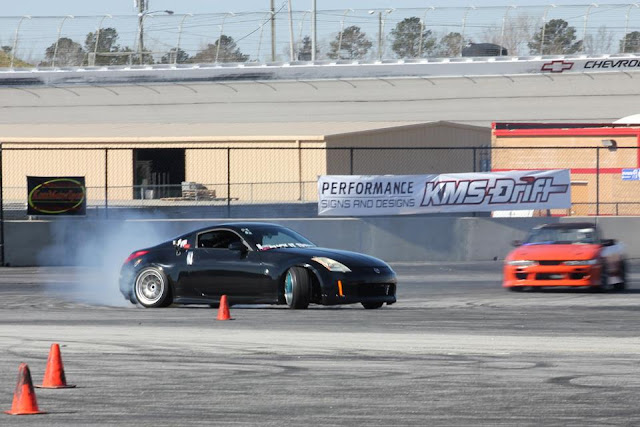 The banana in this photo is pretty weak but we did have some really sick runs through out the day. 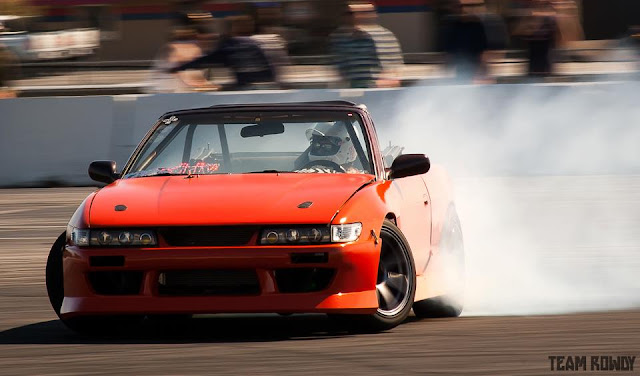 Thanks Phil Ball @ racefriv,  Justin Marlow @ TEAM ROWDY , Johnathon Stancel and some other folks for the drift event pictures!!!!!!

So all in all It was a bad ass time and the car seems to be on the path I want it to be on. I think I'll need to replace the clutch pretty soon but besides that I'm pretty sure I worked out all the major kinks in the LS's armor. The oil pressure did drop one time when I spun the car and let the motor die for a sec, it didn't hurt anything and didn't drop down past 20 psi but it was enough to know that the oil can leave the pick up if it spins hard enough so the accusump will be my next mod. I already have one just need to route the lines.

Thanks for reading everyone!! Cant wait to see everyone out this year!!     #longliveracefriv