The first few times I went to the KMS events at AMS I have to admit I really didn't like them, they seemed unorganized and not really into drifting. But this last time it was really fun! Like really really fun. I didn't drive in the event with the 'rolla as this was a competition which involved some tandem and I really didnt want to put the rolla into a wall. That's what project scrap metal is getting built for. I have to say though it was really nice for once just to sit back and watch the mayhem unfold in front of you. Instead of swapping tires, fixing things, and waiting around in the car I got to sit  back, relax, and let the event sink in. Click read more for some of the funnest grassroots drifting I've seen in a while. 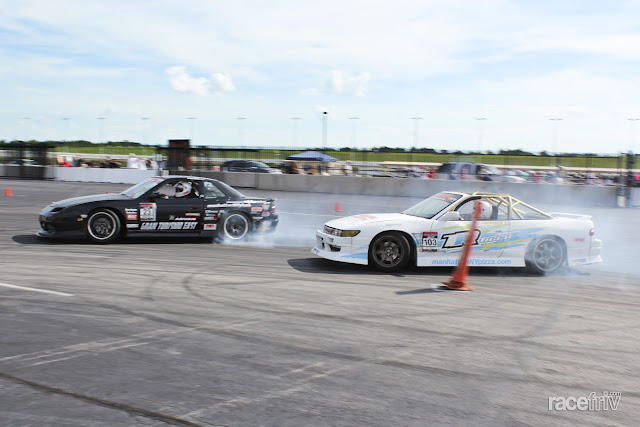 For the first time in a while I got to play Phil Ball our James Mayish photographer, and it was fun. I feel like as a driver there really isn't a way to get all the photos you want. 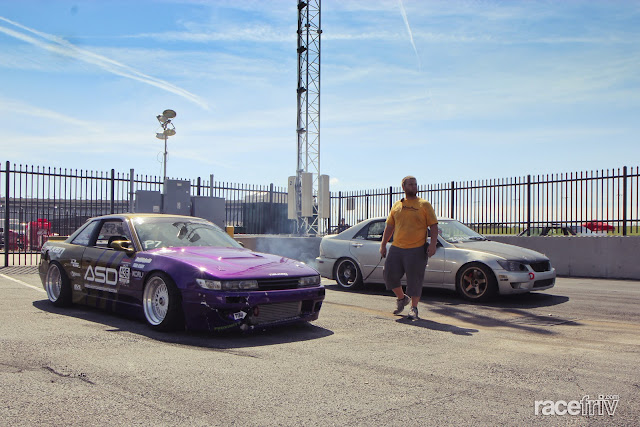 And most important of all when you're drifting and shooting, (unless you have some homies you trust with your camera) you're always going to miss your own run group because you're sliding instead of shooting. 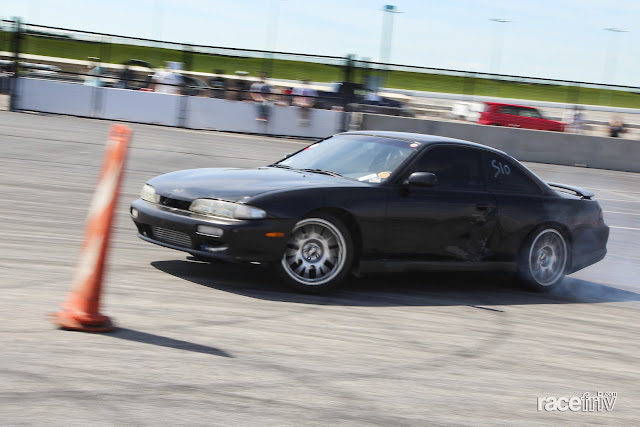 So here I am at the KMS drift event at AMS with no car, and oddly Im having fun, and I didnt think It was possible. 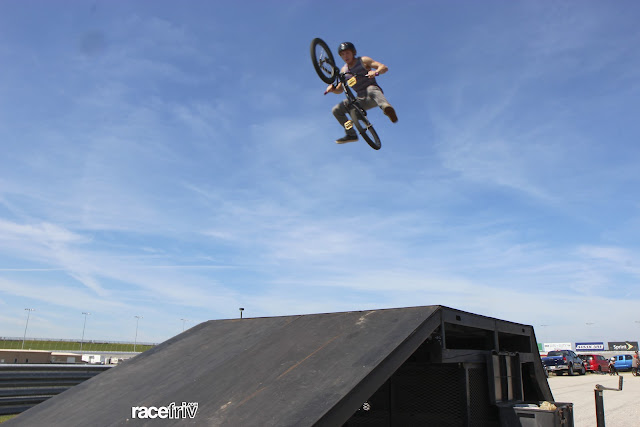 There were a lot of things to check out between runs, like the make shift BMX park they built besides the track. There was actually a pretty good amount of talent out there and I think a lot of my old BMX homies would have enjoyed the little park they set up. I even saw a couple of back flips. 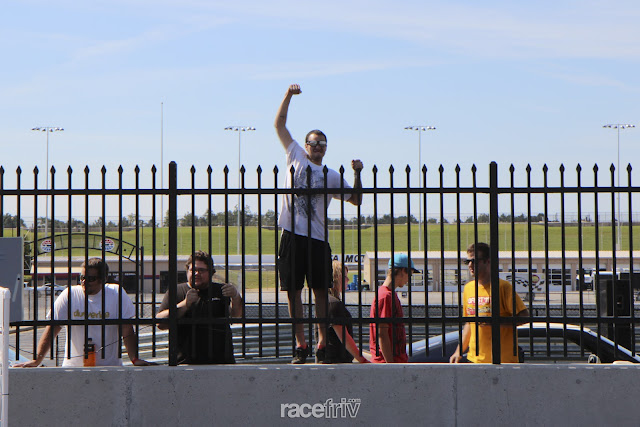 Neil looks pumped up, lets get to some drifting! 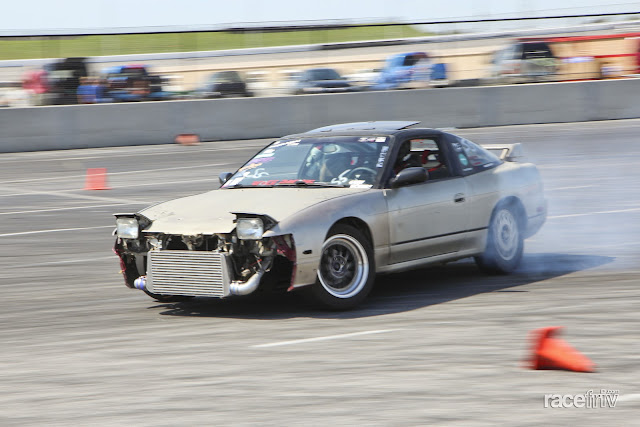 First things first I want to thank my buddy Nicholas Hart up above, he lent me the 10 bucks to get into the event (didnt have any cash on me) Thanks bro! Back when I was doing all the clipping point events Nic Walrus was always super nice and sadly I think maybe the third event I saw him at he blew up his KA, and not some pussy coolant leak break-down Im talking about rod blown through block break-down. Remember that part in Fast and Furious when Jesse open the hood of the eclipse and smoke pored out and everybody around was like WOOOOOOO!!! Yea it was like that, a total explosion and everybody wtf'ed out.  Then.... this kid went out and built a TURBO KA after blowing one up, who the fuck does that? The Walrus does. 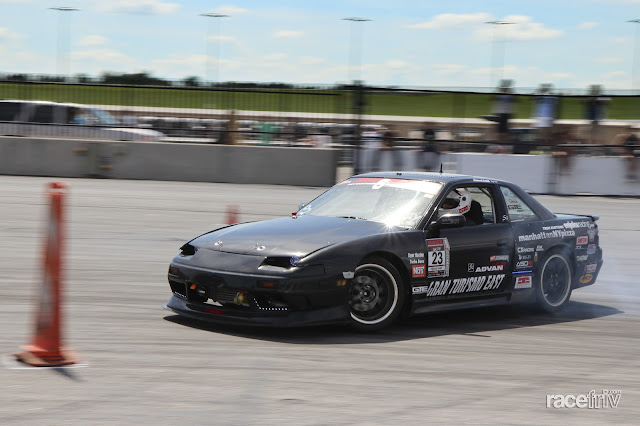 Good ol' Howard Smith up there. He's looking very good as always, he seems to be everywhere and that Sammy built SR is killing it all day. 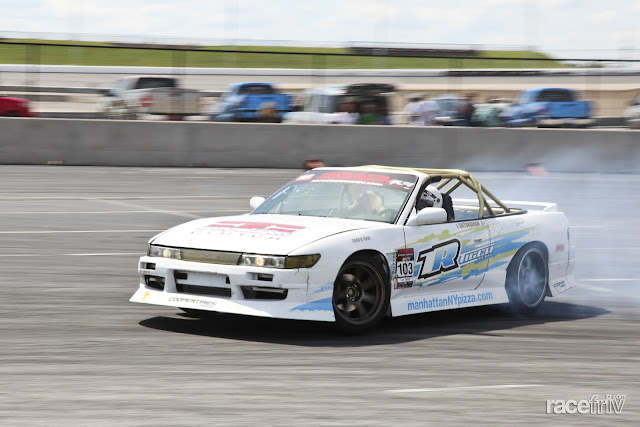 Speaking of Sammy, here is the tiger racing vert that roams the south, and I cant wait for the day I can go toe to toe with Sammy, Sil vert on Sil vert action. Woot... 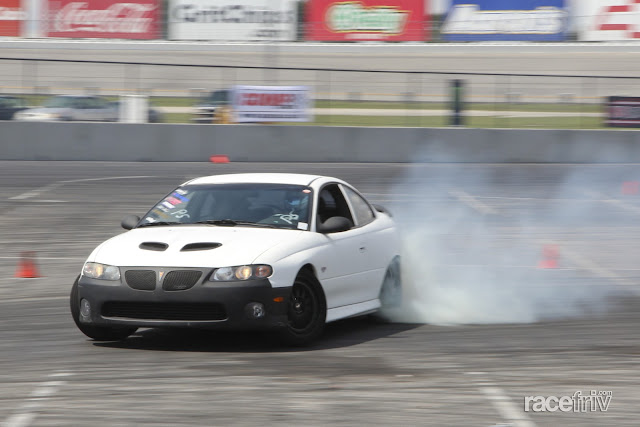 Like a boss!  This guy upgraded the Goat, look how flat it is now!  Usually these things tip over like a drunk Sail boat. 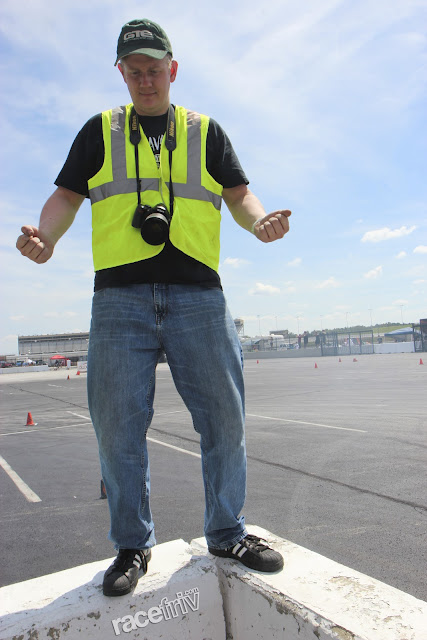 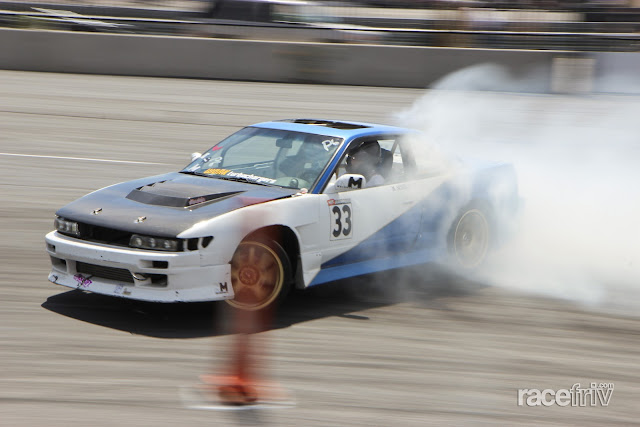 So this is Matt Schroeder and I cant really remember seeing him a bunch before, I know Ive seen him Turner a few times before. Anyways this guy came out swinging! I was incredibly surprised at level this guy was at, he we super clean with lots of smoke, very nice Matt. ( and if Im correct I think he won the Tandem class) 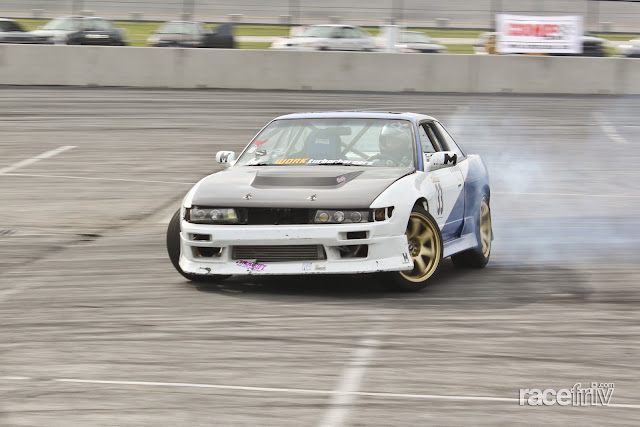 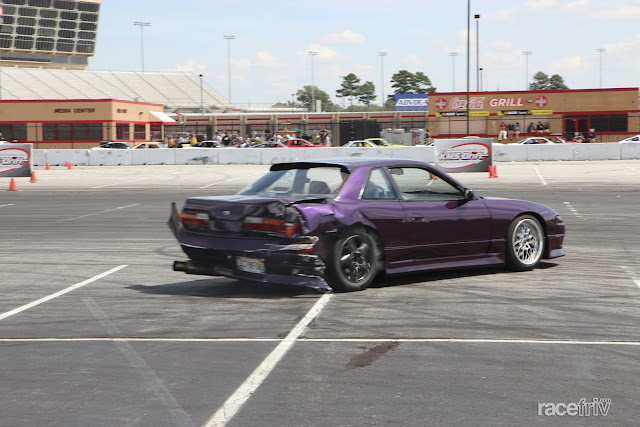 Sad times were had by this poor guy, probably brought the cleanest S13 to the event and ran the wall a little to hard. Got to give the guy mad props though as he hammered it out a bit and kept drifting. Thats what it's all about dude well done! Below is his car before the hit and as you can tell, fucking clean. 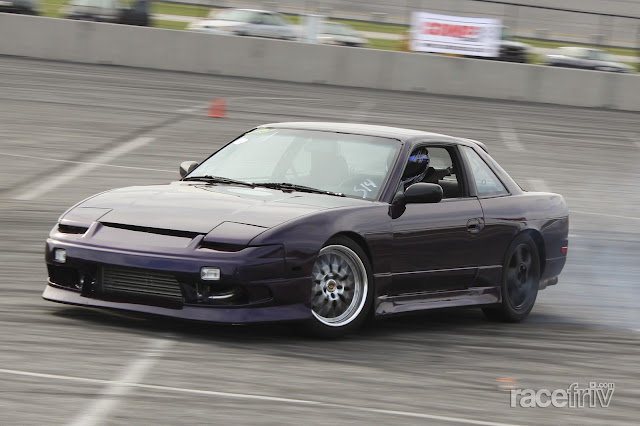 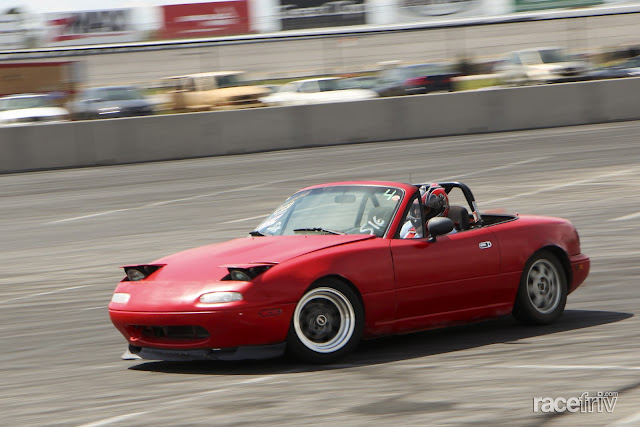 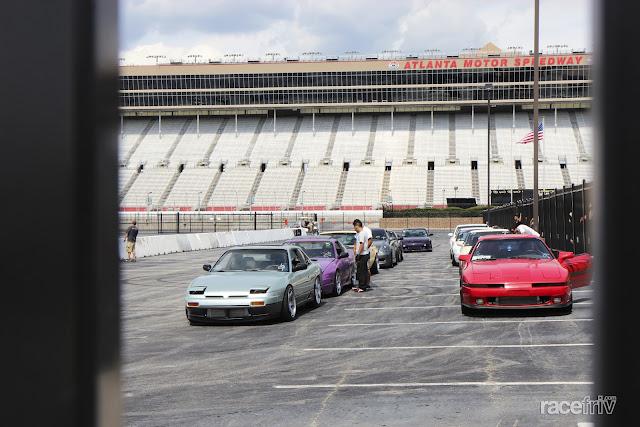 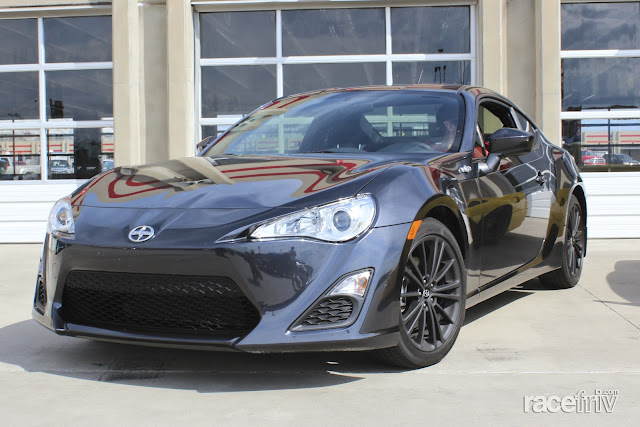 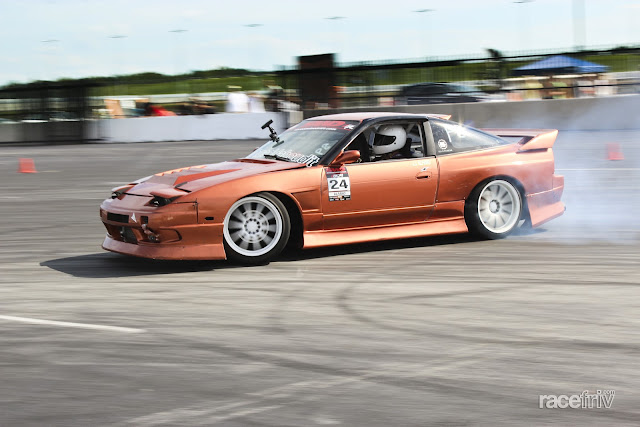 JJ Alfano killing it as always. As Im writing this he's taking the SR20 out and getting prepared to drop some sort of V8 shenanigans in there. Seems that everybody I know these days is going the V8 route. Makes me glad to have just skipped the whole SR20 phase and go right to the LS. Everybody else though seems to be building these badass LS2/L92/427/LQ9's/WTF's fully built beast, and Im just going to roll with the stock LS1 (at first). But then again these guys are moving from 300+ SR's to V8's where Im still used to driving the balls off my 4AGE. 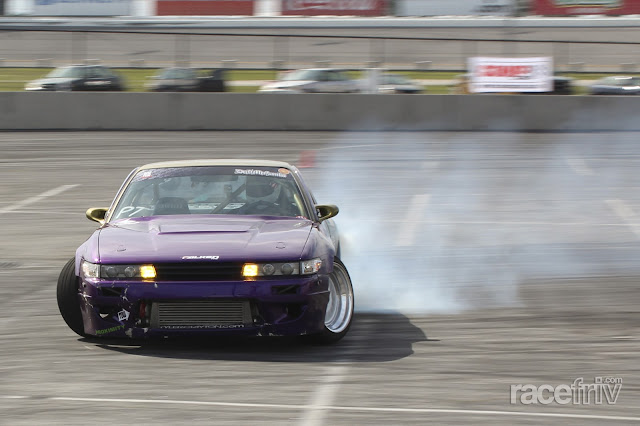 Tylers car is probably my favorite of the crowd, fuck that car is cool. Last time he broke an axle and couldn't compete but this time he seemed to have the car happy and running good!! 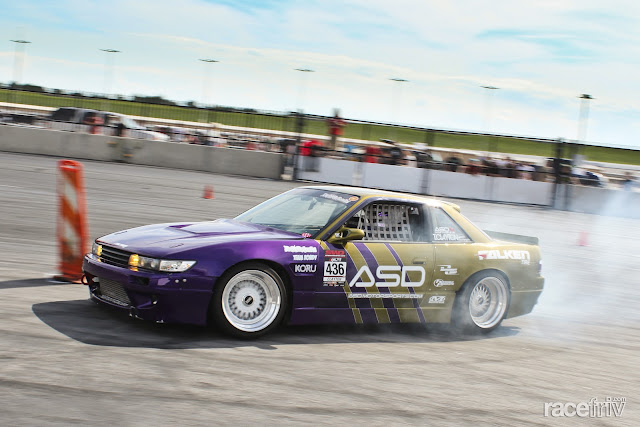 Cleanest car on the grid and not afraid to slam the clipping point. Team Rowdy fuck yea. 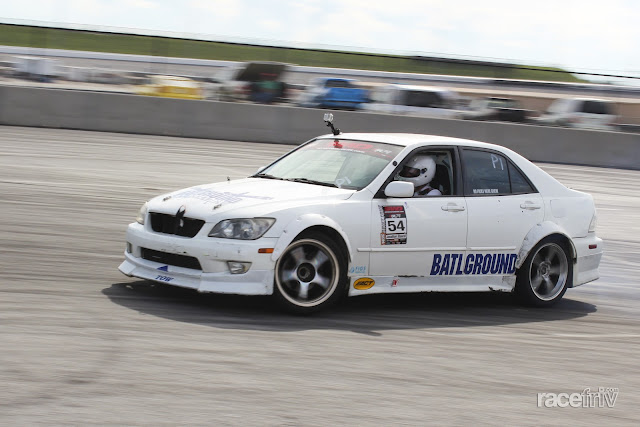 Here is Jonathon Stancel bossing that LS Powered IS around. Badass dude! 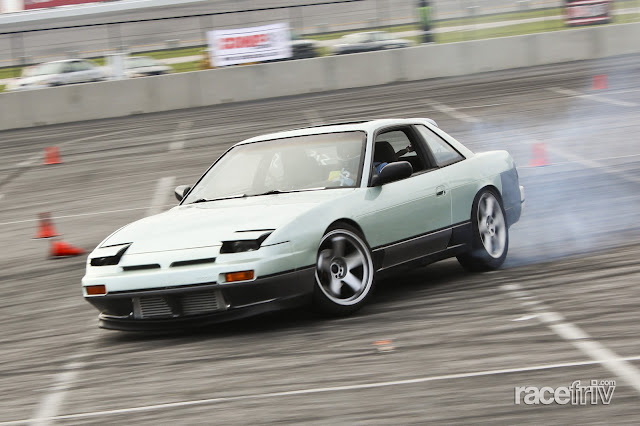 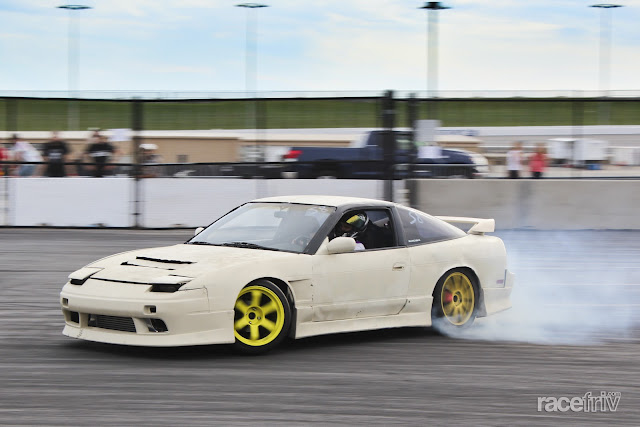 This is Neil with his newly built SR 240. Neil's my friend so I can say this. Dude, this thing is awesome but it looks like shit. Bring it by the racefriv shop and well get front end sorted out, and make plans to get this thing painted and fix what ever the fuck happend to that hood. Great driving though!! Killer man! 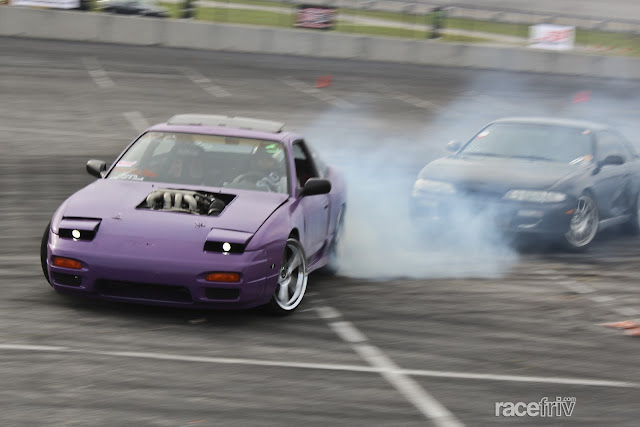 Here is the surprise of the day for me, fucking Sony Smith was killing it out there in his purple beast, even going up against the great Tony Schulz. Tony by the way, (no surprise here) won the singles event and of course killed it every run with no mistakes. 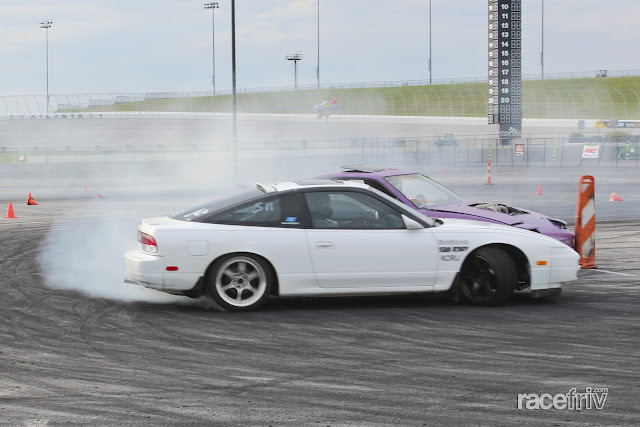 Here is Sony going against Eugene, in some of the funnest tandem runs I've seen in a long time. These guys were out there truly keeping drifting fun. 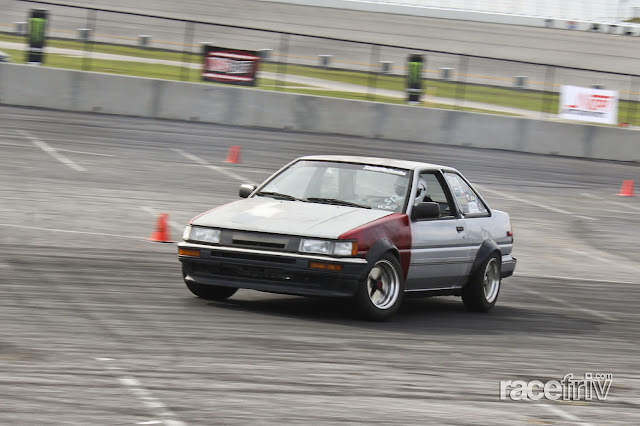 This is what the dancing/humping photographer on the K-rail Justin drives. A 20v swapped 86. Hachi love dude! 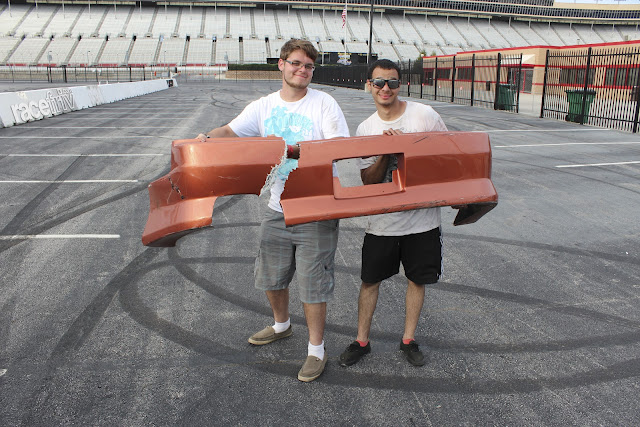 Here's Neil and Alex trying to put JJ Alfanos bumper back together again. Your going to need some zipties guys. 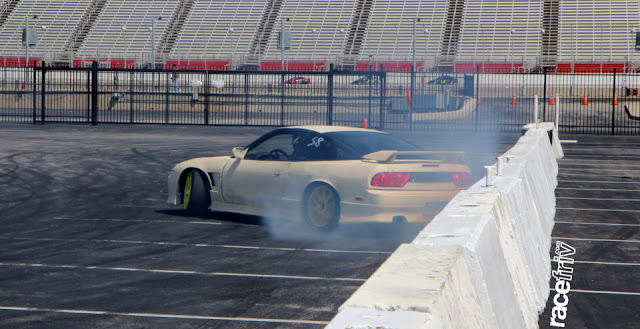 Speaking of ripping bumpers off here is Neil giving it his best shot against the wall. Fuck yea dude!

Alright well that's it. I wrote a lot on this one hope everyone enjoyed it! Stay friv everyone!