Project Scrap Metal is finally put together. Its purple and its proud, its come a long way since it was a pile of metal when I first got it and now its finally moving on its own. Let's take a look at a few pictures I randomly snapped today to show you how she's coming along. 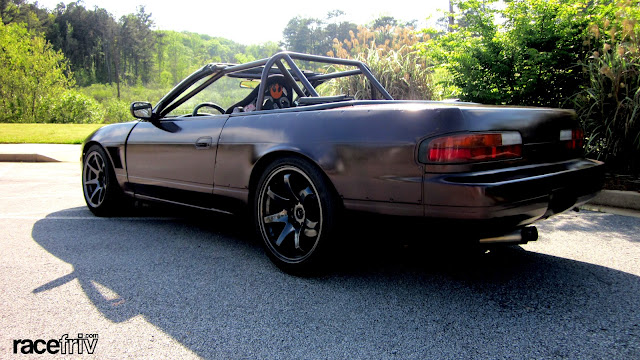 So yes she's finally up and running, I was thinking the color black all the way up until the day I picked out the paint, then I said screw it, nobody paints their 240 maroon these days lets do something different. At some point I'm going to paint the wheels white and get some awesome giant white stickers of course to rep racefriv. 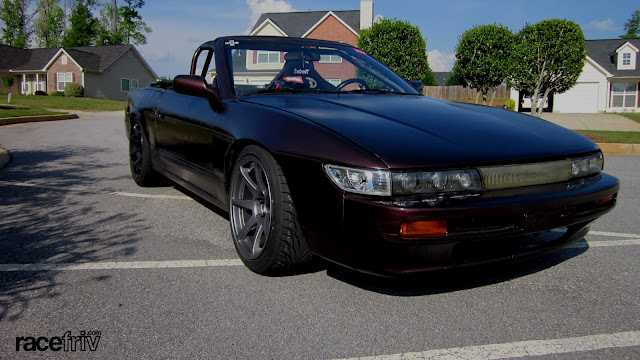 I'd say the front end came out at around a 7/10. It's not perfect but everyone has to remember I built this car to terrorize, not to be a show car so if everything actually stays attached to car i'll be happy. The lights are all on custom brackets etc.. so for eyeballing the whole front end, it came out pretty well. 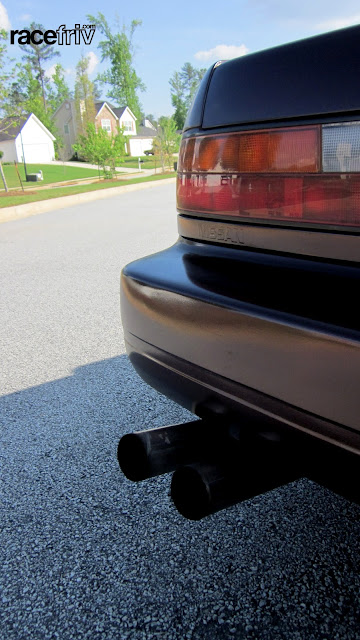 See I told you it was some random snaps I didn't even leave the neighborhood. :)

The exhaust came out pretty well I like the look of it and it sounds pretty good for home made. All the tail lights work and of course you can tell I quick-sprayed the car, you can still see the Nissan script under the paint. 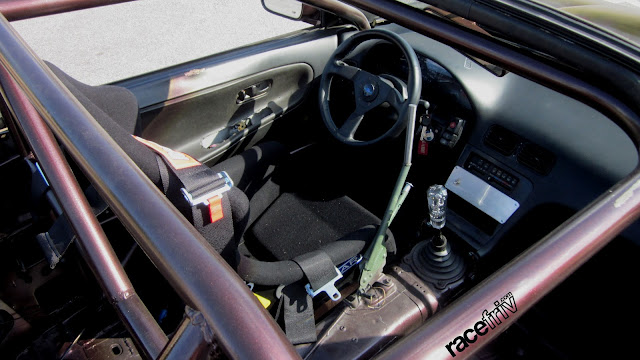 Here's a snap of the interior I'm running for now. It's pretty simple, nothing fancy, big e-brake, standard bubble knob, sabelt seat and a personal wheel. All nice stuff, the seat is a little uncomfortable, but it's doable for now, also you may notice that you dont see any door bars. I moved the driver side door bars down, and made an x beside the seat. It's hard to see in the pic but it's way easier to get in and out of the car and my elbow won't smash against the bar now. Also hard to tell in the pic, the dash has cut-outs for the cage now. Most everything under the dash is gone, but I kept all the parts for heating the car, cant take out the heat on a 'vert in case you drive into some cold weather. 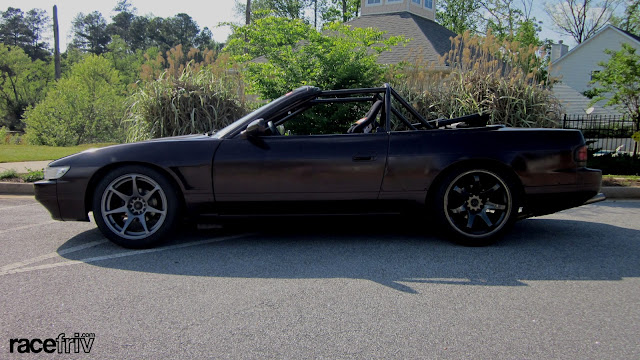 You can see it better in the first pic, but the over-fenders were perfect. They weren't the over fenders I ordered which were origin 50mm full fenders, enjuku racing kept getting the shaft from origin on getting those  so finally 6 months later I gave up and they got me some 6666 30mm fenders (which were $100 more but got them for the same price so at least they gave me a deal). The 6666 fenders are awesome, really nice material went on with no problems, not even sanding lol. They also look alot better, if I had received the 50mm fenders I ordered Id be regretting it now, as it wouldnt look as clean as these do . On the other side of the car I made a little plate out of aluminum sheet to cover what what still looked bad from the old damage below the over fenders, it looks ok, I'd have to point it out to you to notice, and side skirts will cover it up at some point. I never drove the car before I installed the cage so I cant really say how its affected the chassis but it feels alot stiffer than my AE86. When I jack the car up in front of the rear tire the whole side comes up even. No matter where I jack it up at it just brings the whole side of the car up so its pretty damn stiff. 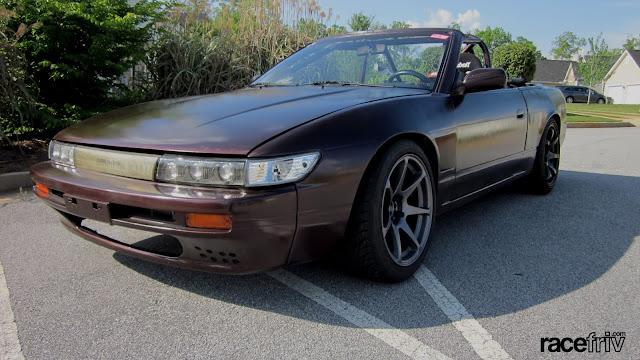 So I've got one drift event on the car...what are the results? Some things I love, some things I hate. Let's start with the good. The suspension is amazing, those stance coilovers are the best things I've ever bought. The car rides great, it handles great, there's very little bump steer (even though that's more because of the suspension geometry) There is no body roll and thats on stock sway bars with bushings! It handles great, I'm really happy in that dept. To the next good thing... the steering. I love it... these cars really do drift themselves. Power steering is a strange feeling at first but once you let the car do the work its awesome. I do love this, I need to shave off the rack stops on the lower arms to get more angle since it has spacers. To put it into perspective I drifted this with no alignment what so ever after replacing outer tie rods, RUCA's etc.... and had no problems with it. Awesome. Brakes are tidy to, they stop really hard and even get the brand new 245" Federals chirping when I slam on them. All is well in the stopping dept, including my awesome hand made e-brake. 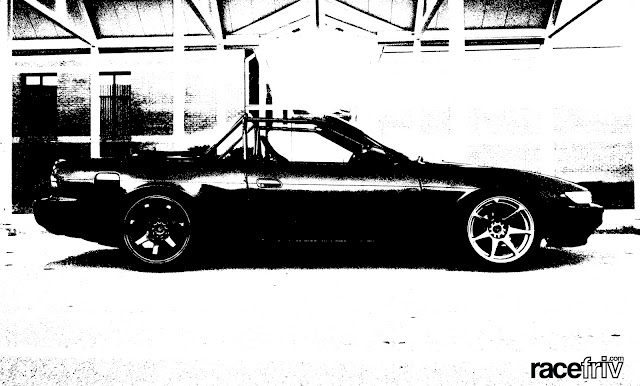 So for now the things I hate, for one this VLSD has got to go. I was told this and read this all over the place before I went out and drifted it, it wasn't so bad, it did lock up pretty well but it seems to have a mind of it's own. You never really know when its going to lock up or not, causing you to drive/swerve/clutch kick all over the place. It just doesn't work for hard core drifting.  I could see how it would be a major upgrade from an open diff on a street car. Now the second and most important thing I hate is the motor. Let's put aside the fact that I've had to trouble-shoot this thing for the past 6 months to get it to run. I bought the motor set from some meth heads (really) so thats my fault.  But a basically free motor was too tempting to turn down. I spent about 300 on parts getting it to run.  After all that it's just a lame duck motor to me, I would boost it but its JB welded together, it leaks oil like crazy and the gearing is all wrong (SOHC tranny so that doesnt help).  The main kicker though is that it wont pass emissions to save it's life, all new parts and it wont pass, and I'm not going through the trouble to put EGR on it, so at this point it's just a waste to dump any more money into it just so I can have 160hp at the crank. It's slower than my 86. What am I going to do? Sell the car?  Hell no, the car is great..... it just needs a little ...push (as the joker would say)...I'll just leave the photo below and let you figure out what's next for project scrap metal. Stay friv everyone, and thanks for reading.

I know I skipped over the paint part on this, to check out my painting process go here... 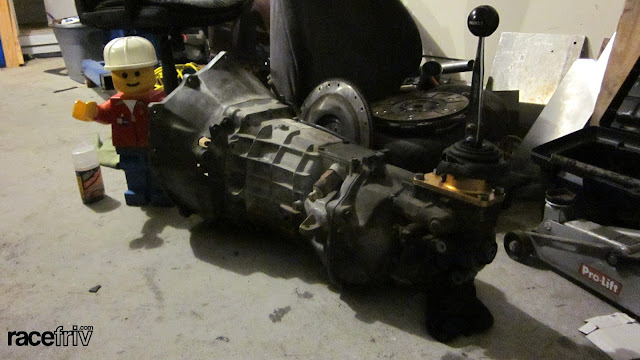 I'll give you a hint, this transmission was first used on the Viper....