Thoughts on The New Toyota 86.

So I've dedicated a lot of my recent time reading, looking, talking about and thinking about the new Toyota/Scion/Subaru, 86/FR-S/BRZ. So I figured Id do a little thought dump here on the blog. See I dont really ever think about buying new cars because there aren't any I'd like to buy besides maybe the BMW 1M. There's no way I could justify spending that much money on a car. This new 86 however has peaked my interest ever since Ive heard there was a joint effort between Subaru and Toyota. Of course when everyone heard about this at first we all thought it was vaporware.. too good to be true. Coming from the owner of a WRX and AE86 I am glad to say It wasn't and they reveled it a few days ago. So here's some thoughts, info, and images Ive gathered from various car blogs around the net. Hit read more for some really interesting insight on what this new car is all about. 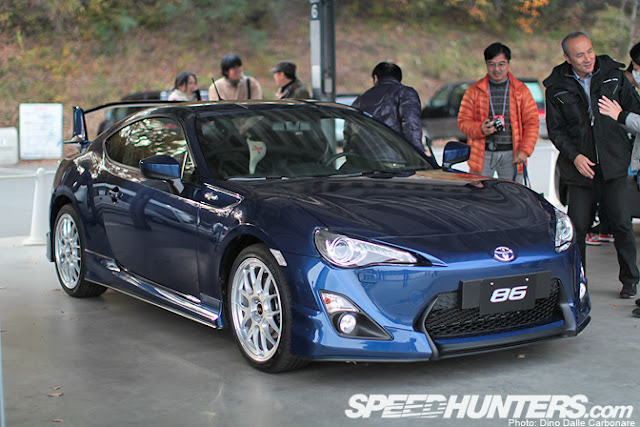 Some of you know I own a 05 WRX and a 85 Corolla GTS and the moment I heard about them sticking my WRX engine in a new AE86, I pretty much bought the car in my head. The car looks great and I'll let all the bigger things speak for themselves as I'm sure you may already know a lot about this car. I'm going to concentrate on the little stuff. 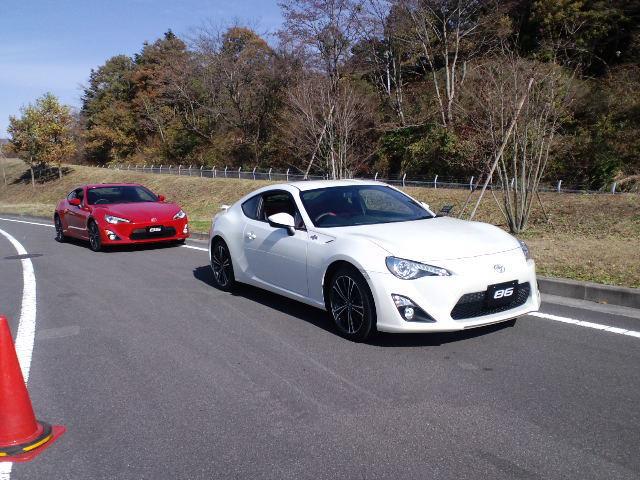 It's a Toyota built body with lots of Subaru bits thrown in. It will sell as a Toyota everywhere but in the US where it will be a Scion (it will look almost exactly the same no worries) and it will sell as a Subaru all over the world.

So to the engine shot. 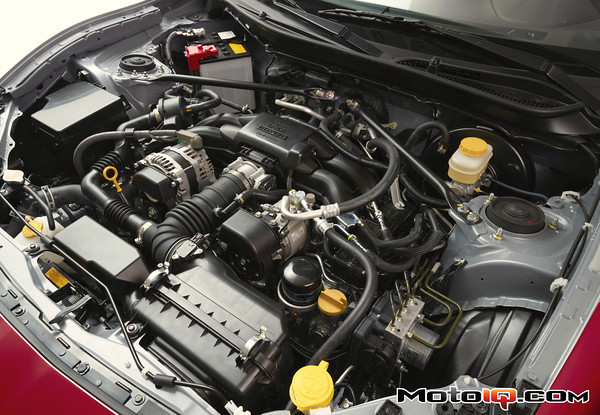 Lots of things to notice here Ill just list them off.

1. Strut bar going from the pillars to the firewall, simple great mod, yet most cars dont have it.
2.Remote mount oil filter sitting on top. Thank you baby jesus. Another great idea that nobody ever does.
3.All accessories look just like my WRX ones, which means cheaper parts and its hella easy to work on.
4.Whats going on in front of the struts, no metal? is that just the fender liner? More room for angle perhaps?
5. Speaking of struts those tops are exactly the same as my Subaru ones, meaning they can take a beating.
6.No plastic crap to cover anything, the made it simple to work on, why cover up this brilliant engineering.
7. Due to the placement of this motor, MotoIQ says it will never be AWD. I agree. (put plenty of room for a turbo)
8. Look at the battery placement, back towards the passenger like the S2000, not sticking way out front like the WRX. Well done you say but what about the JDM models. 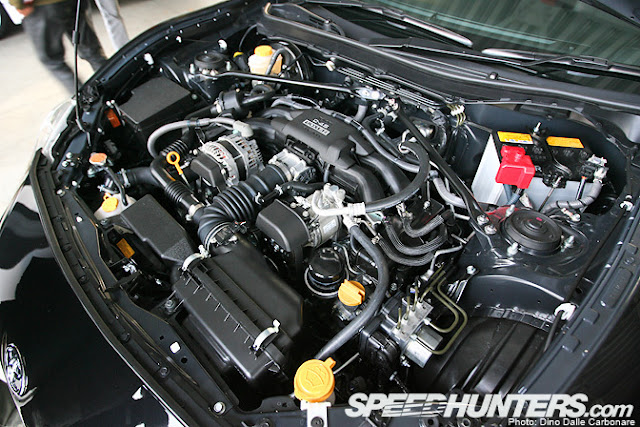 BAM! Battery still on passenger side (due to moving the booster). Genius. Most cars just stick them way out front to avoid this on a global platform. But Toyota didnt want to bring any weight to the front. 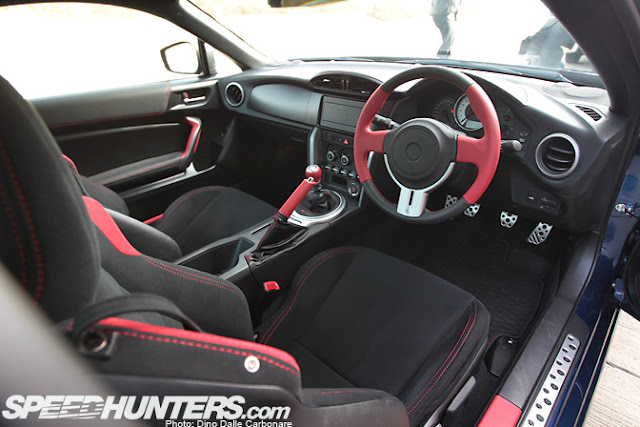 Now the interior, this is the JDM model but the Scion version looks very close, think less color more silver, with Scion badges. This is a good driver set up, simple simple simple. Just a couple of knobs and switches, no shit on the steering wheel, simple gauges. No fat people seats, and e-brake on the close side of the console. This one has a cdplayer/Nav delete as an option. Awesome. 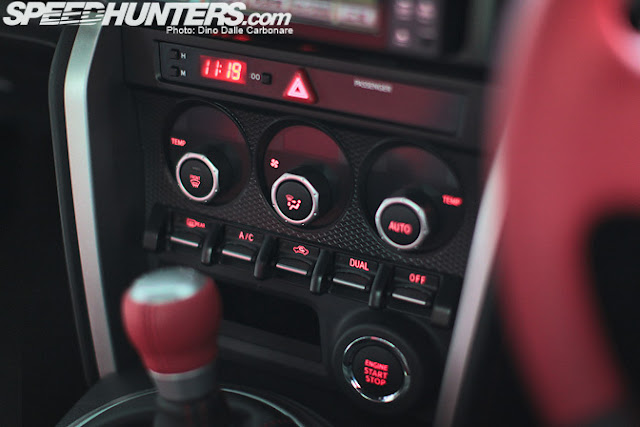 Simple yet functional. Its the way of the iphone and they have sold a billion of those, why is this the first car to get it? I've heard that the Scion will not have the start button but have an oldschool key. Great idea for racecars but I really hope its an option to have keyless entry and push start like the Toyota 86 shown here has. If the Suby version has it, and the Scion doesnt that will be the deciding factor, for a daily, i'd want to have it. I just hate getting the keys out of my pocket after ive already set down lol. I couldn't have a room mate with a S with a cool push button start and me not have it. Also it's keyless entry... oh how I yearn for that. 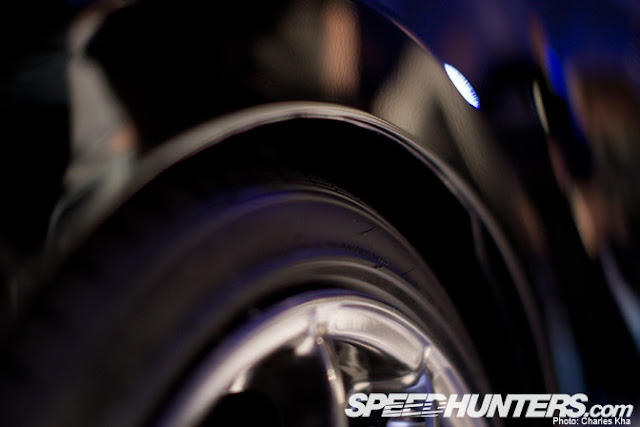 Speedhunters noticed that the fenders in the rear come pre-rolled! How awesome is that. If youve ever tried to roll the fenders on an AE86 you know how big of a pain that can be. Glad they did it first, they know that some people will slam the shit out of this car with dished wheels, might as well help them out a bit. 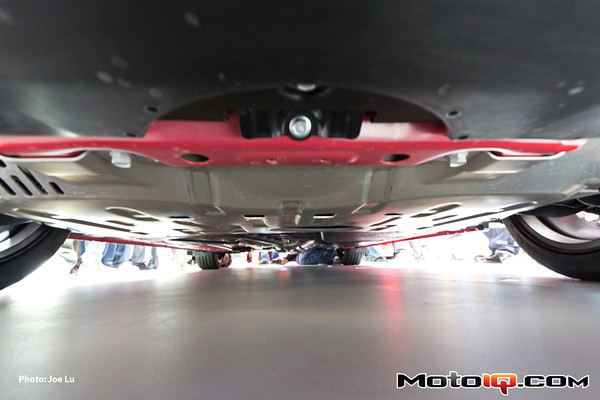 Another cool thing to note is this undertray, no only does it protect the engine from crap, it helps with airflow. 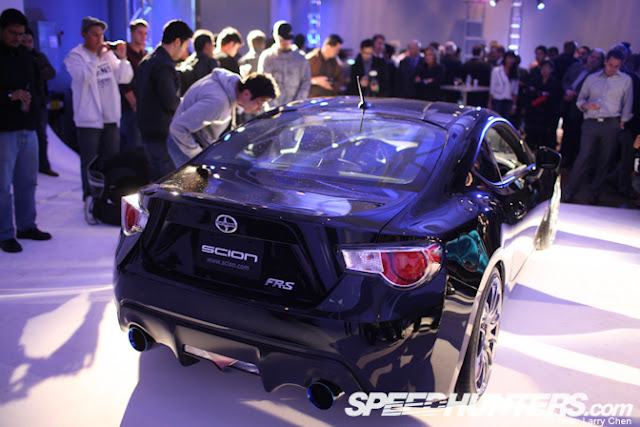 A couple of different blogs have noted that the 86 designers came out to some grassroot events to figure out what the typical car racer/drifter needed and decided to make the back seats fold down flat so you can fit 4 wheels/tires in the back. Thats one of the things I like about my 86 the most. It doesn't sounds like a big deal now, but take it the track one time and you'll get it.

Now to blow your mind... 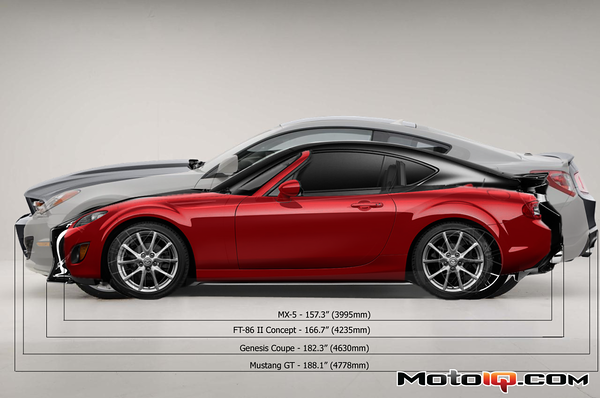 Can you see it in the back there? Thats right its HIDING BEHIND A MIATA. Its like a hard top Miata, with 200hp, with a bigger wheel base, and more room. So those of you thinking this was to go up against the Genesis and the Mustang think again, its not in the same class, nor should it be, its an 86 after all. 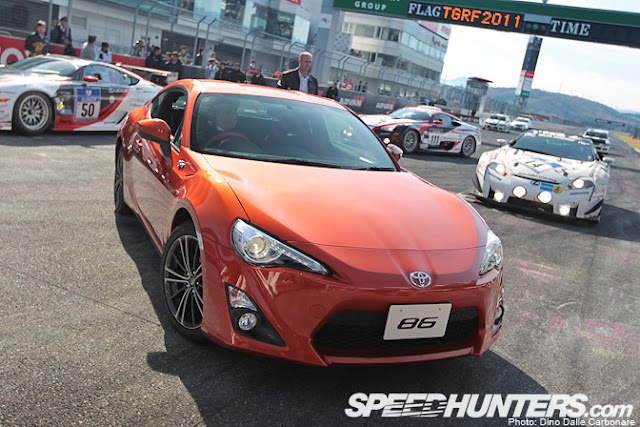 Well I think that's all my thoughts for now. If you want anymore info be sure to check out, MotoIQ and speedhunters. Theres lots more to go over, but maybe i'll wait till I actually get to drive one.

Heres a cool video of the suby.

Thanks for reading, stay friv-