One of the things I so often see misunderstood on the interwebs is the relationship between horsepower, torque and vehicle performance.  Im going to try my best to pitch this article at a level that makes it interesting, informative and not out of reach for the non math inclined.  Let me know how I do! 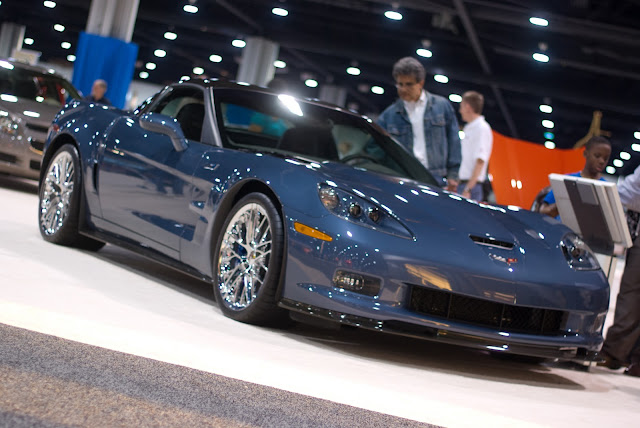 Other than being a photographer, and a pastry connoisseur for racefriv I have this totally awesome day job designing engines with a specialization in performance.  Every day I get to plan tests, look at dyno curves, emissions data and performance numbers.  this means I have a very long standing relationship with engine torque curves and how they matter to overall vehicle performance.  If you want to walk for a few minutes in my shoes follow the jump: 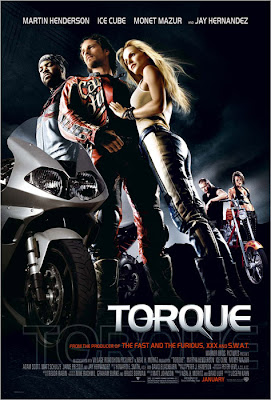 What is torque?
From an engine perspective torque can be thought of as "rotary force".  Any time I try to turn a shaft I must apply torque to it.  Torque is described in some interesting units - force x distance, where the distance is the radius at which the force is applied.  Typical units are foot pounds (ft.lbs) and Newton meters (Nm), The difference is just in the units used, they mean the same thing, rather like Miles or Kilometers it all comes down to which country you live in.  In the United states  ft.lbs are most often used.

Torque as a number all by itself isn't very useful for determining vehicle performance.  "How can that be?" you ask, surely lots of torque means a fast car right?  Not necessarily.  For example it might surprise you to know that a cyclist is capable of producing over 100 ft.lbs of torque at his rear wheel!

Well as I mentioned torque is calculated in much the same way as the force generated by a lever.  Just like a lever you can "create" torque using a gearbox or reduction drive, rather like using a long crow bar to generate a lot of force.  Archimedes said "give me a lever long enough, and a fulcrum on which to place it and I shall move the world" - likewise when it comes to torque:  Give me a reduction gearbox and I can turn a crank with my hand and generate 1000ft.lbs.

So why do we quote torque figures from engines?  The specs contain more information...

Stick with me, we are almost there!

Lets go pick something from a car website:  Here you see specs for the 2.0L engine in the 2012 Ford Focus. Try to stifle those yawns...

Notice how torque is quoted @ an  engine RPM.  In actual fact that maximum torque figure, given with an RPM is longhand for a POWER number.  For torque to be useful to a vehicle for performance it needs to come with speed.  After all 1000ft.lbs of torque isnt much use if it comes at one revolution per day.  The one critical piece of understanding to this whole puzzle comes from the following equation:

Torque x RPM = power.   That one equation explains this whole article in a nutshell.  It really is power that is important.

You might have heard silly phrases like "horsepower sells cars, torque wins races" but i'm here to tell you that's bullshit.  So how do we interpret these specs?  We need to see how the torque or power changes with speed.  We can either create a basic "power curve" or a basic "torque curve"  Along the lines of what you get when you "dyno" an engine or car.  We need to use a little math to convert from torque to power using RPM so here goes:

To make a torque curve I need at least 2 data points.  I have peak torque, 146 ft.lbs @ 4450 RPM.  Next I need the torque available at max power.  I need to convert 160hp @ 6500RPM into a torque figure.  We use the following equation to take units into account 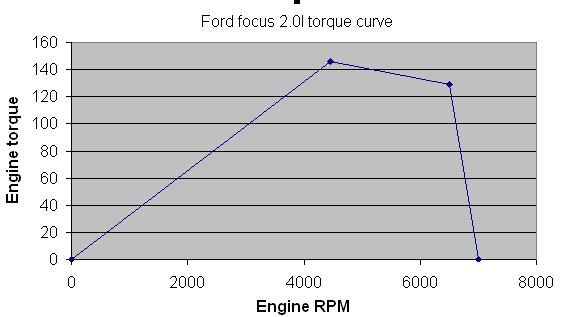 I told you it was simple.  We know that at 0 RPM an internal combustion engine cannot produce any torque.  And we know that this engine will have a rev limiter somewhere around 7000 RPM.  Now we actually have 4 data points to create a torque curve.

If we convert the Max torque number (@4450 RPM) into a power number we can also add a power curve to this chart.  (power now shown in yellow as horsepower) 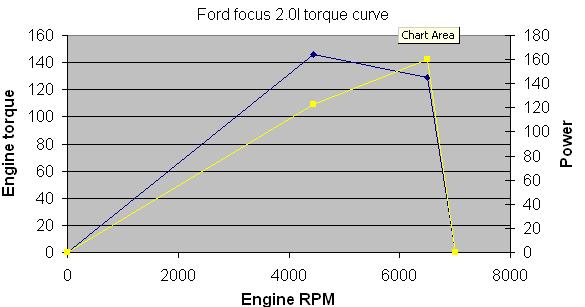 Now you're ready to compare some other vehicles. 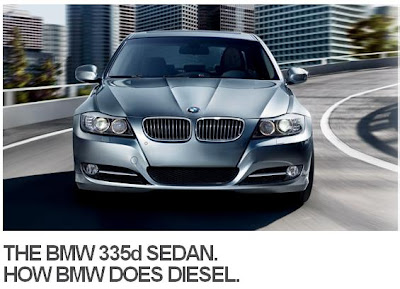 One thing I hear a lot is that diesels don't have much power but "they have a lot of torque".
So lets do some comparisons between a gasoline and diesel engine to see how they stack up.  A good comparison might be the BMW 335D and the regular gasoline powered 335i.  Both are turbocharged 3.0 liter inline 6 engines.

Here is what BMW tells you:

If horsepower sells cars and torque wins races, then I guess the diesel car is going to be faster than the gasoline right?

Wait, lets look at how the torque curves compare (using that math stuff we learned above): 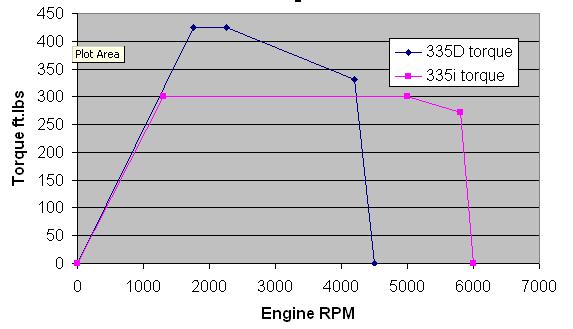 The 335D has a hefty Torque advantage until the rev limiter cuts it off at around 4500 RPM.  That's because diesels cant rev as fast due to the inherent nature of their design.  But it wins because of torque right?

Remember Archimedes and his lever?  The 335i has RPM to trade for torque, something as simple as a lower final drive ratio (numerically higher but described as lower) would multiply the torque to the wheels while trading off that speed.

Here is how they compare when you multiply the 335i torque by a final drive factor of 1.35 (and divide the speed by the same factor) 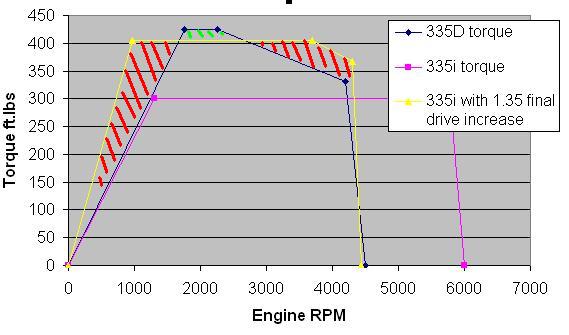 Now that the speeds are normalized by the adjusted final drive ratio you see the gasoline engine actually has a torque advantage at most engine speeds. Differences are shown with shaded red and green areas

What does this mean?

The actual BMW published final drive ratio for the diesel is 2.81 while the gasoline is 3.46. This means the BMW engineers gave the gasoline version a 1.23 multiplier to help increase torque at the wheels, but they didn't quite go as far as I did in my paper exercise (probably to try to maintain better fuel economy and lower noise etc..).  Apparently it's still enough to give the gasoline version the advantage with a published 5.6 second sprint to 60mpg, vs a 6 second time for the diesel version.  The BMW diesel gets a lot closer than many to matching gasoline performance, kudos to BMW, but it still couldn't quite catch up. It also adds 200lbs to the weight, and a few thousand dollars to the price.

So much for torque winning races over power.

Why then does anyone bother publishing the data like this?  Well if you are like me you can make some use of the numbers if you are willing to do the math but you don't need to go all James May with spreadsheets.  Some engines, like the Honda F20 or the Rotary Wankel in the Mazda RX8 make a lot of power but do so only within a higher narrow RPM range.  By giving two data points (max torque and max power) the spec gives you the information needed to see how narrow that useful power range is.  Narrow power ranges by themselves may not be a problem if the transmission includes enough gears to keep the engine in that optimum rev range.  This is why sporty cars like the S2000 with narrow power bands tend to come with a 6 speed transmission.  It will mean more shifting for the driver though, which may or not be your cup of tea.  The RPM range gives a sense of the character of the engine, and how it might feel to drive it.

Ignore the torque number, look at the speeds.  The engine performs best above 5500RPM. Given the engine operates between 1000RPM and 9000RPM (an 8000RPM range) you can conclude that the car performs best in only about 3000 of 8000 (38% ) of its rev range.  This ought to tell you that you're going to need to work hard, shifting lots, to keep this engine singing even with a 6 speed transmission.  Compare back to the big BMW turbo engines above and you see  they perform well over 80% of their rev range.  The BMW doesn't need its 6 speed transmission and the driver will be able to skip gears during every day driving without any sort of problem at all.

And now, to make the picture of the ZR1 in some way relevant, here are the simple torque curves for the Ford Focus and the ZR1 on one graph. 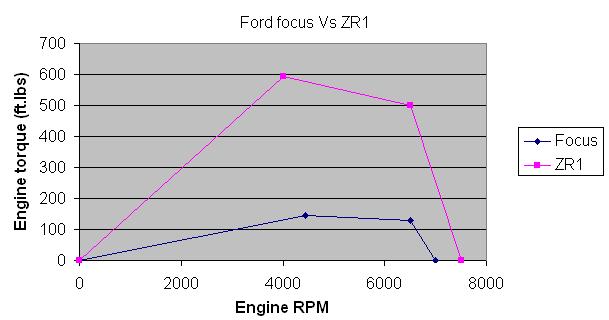 This is why a ZR1 can pull away in 3rd gear and still kick butt.

Hopefully this has given you some insight into engine torque curves and their influence on vehicle performance.
Till next time stay frivolous!