Phil "James May" Ball here with the first of what may become a series of interesting yet frivolous articles.

Fact: The vast Majority of people reading this blog are gearheads.  We at racefriv are too, and if you're like us you probably get a small chuckle when you see craigslist ads for cars confusing an I6 and a V6. Mentioning a Wankel engine to a non-car plebian is usually good for a giggle too.  Even gearheads have limits though and many are unaware of some really cool engine designs that history has left behind.  Some were successful, some were not, some just made awesome sounds or looked nice.  So here, for the dedicated gearhead is a small collection of my favorite engines.  If the extreme James May content in this post disturbs you, try to stay calm.  I was born British, my Father was in the RAF and I'm an engine design engineer during the daytime, this stuff excites me way more than it should.  Also - Mustache. 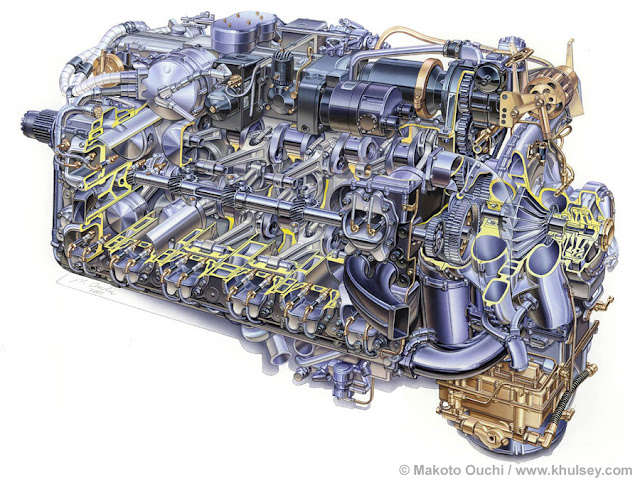 ﻿Tally-ho chaps, fancy a quick fight to the death in the sky before Sundays Cricket match? 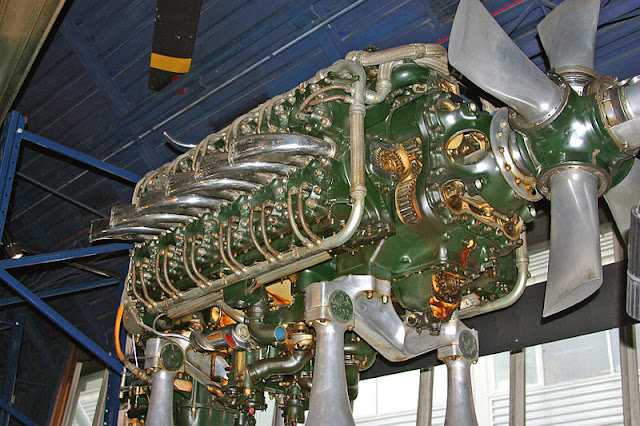 Be warned the story of the Sabre is a sad one.  It's sad in much the same way that an episode of the "The Littlest Hobo" was sad.  The good guys win, but you're left with a void, a lump in your throat, wishing that things could have turned out differently.  If you have no idea who the Littlest Hobo is then: 1) I feel old, 2) click this link so you can know what sad really feels like.  Why did I have to click that link, and who's chopping onions?

The Sabre was a wacky Britsh engine built during WWII and installed in the Typhoon (also known by other names such as the Tempest or Sea fury).  Its a sad story because none are currently known to have survived in flying condition.  There is a restoration underway on several, although none are flying at this time.  Its particularly sad because the sound of the H24 engine making around 3500hp was said to be quite a delight.  Hopefully one day we might hear the mighty roar for ourselves.

So whats special about the Sabre engine?  First of all its in the now somewhat rare H configuration.  By itself that might not be so special but it was also a sleeve valve engine.  Sleeve valves are something the vast majority of muggles have not come across before so have a good look.  Yes its bloody marvelous isn't it?  Also - witchcraft.

It needed more development with a supercharger to really make it into a fully fledged fighter, but early trouble with production meant that engineering effort on the blower version was halted.  The Tempest therefore had some of the best performance of all fighters at low altitude but was unable to take the fight over 20,000 feet.

I know, now you want to see and hear one in action.  And you can't.  I told you it was sad. 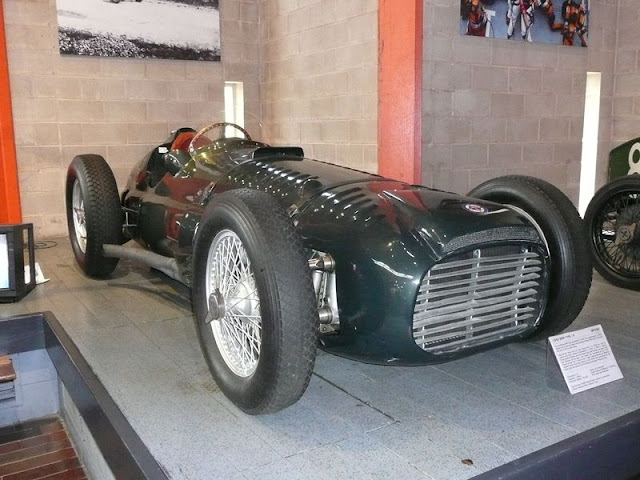 BRM stands for British Racing Motors and was a formula 1 team in the 1950's and 60's.  Their first engine was designed to take advantage of rules implemented by the new ruling body.  The rules stated that a naturally aspirated engine could be a maximum of ﻿4.5 liters, while a supercharged engine was limited to 1.5 liters.  BRM realized that a naturally aspirated engine would hit a theoretical power limit based on volumetric efficiency, but a supercharged engine would be limited only by the amount of boost that could be forced into the engine and the structural limits of that engine.  They created a 1.5L supercharged 16 cylinder design to maximise piston area choosing lots of small pistons over a design with fewer large ones.  This meant there was more cross sectional area through which the air and fuel mix could flow and would allow extreme high RPM operation to further maximise output.

The result (with help from the two stage rolls royce supercharger design) was a staggering 600hp.  Yeah, next time your buddy with an S2000 or an RX8 puffs his chest out and starts talking about hp per liter, you can smack his arse back into 1950 with this article.  Better yet Rolls Royce claimed it would be good for 800hp in short sprints, and 1000hp on "sprint fuel".  I don't know what "sprint" fuel entails but I reckon it probably causes cancer in California.

The power was taken from the middle of the engine using gears, effectively making this two V8s joined in the middle.  This was done to avoid subjecting the entire crankshaft to the full torsional load of all 16 cylinders. 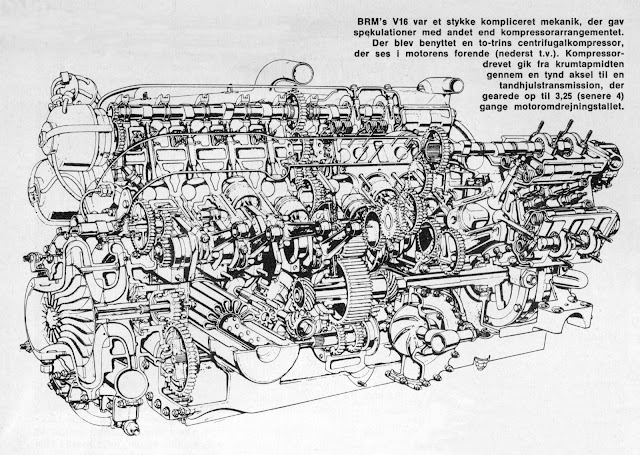 Its first race outing was in 1950 at a non-championship race in Silverstone.  When the flag dropped "the BRM lurched forward from the back of the grid, engine screaming, and then the car abruptly stopped".  It had broken the cars main drive shaft.

In 1952 the car was driven at the Ulster Grand Prix by the famous Fangio.  He declared it the "basically, the best Formula One car ever made".  Fangio later crashed in a Maserrati and was unable to drive for BRM until he recovered from a neck injury.  When he returned he won at Albi in spectacular fashion. His car was capable of 186mph, running 72 PSI of boost.  Yes you read that correctly, 72 PSI of boost.  Their Ferrari competitor Albert Ascari complained that with all the noise of the BRMs in the race he couldn't hear anything.

I don't know about you, but the thought of trying to haul ass around a racetrack in a screaming banshee shaped like a cigar trying to put 600+hp down on skinny wheels is utterly bonkers.  It gives me chills when I hear it. 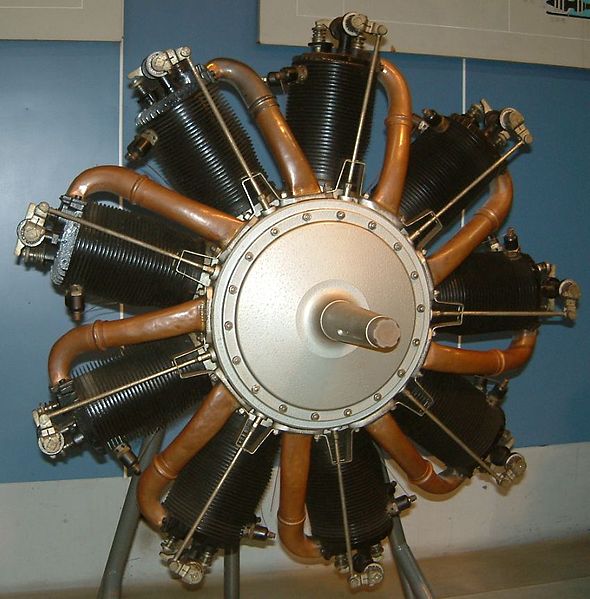 the copper pipes feed the air fuel mixture to the cylinders from the crankcase, the whole thing spins as one.

When most people say "Rotary" engine they think of the Wankel engine, made popular by Mazda in the RX series, and later by a hilarious series of memes involving jokes about boost and tip seals.  The rotary term is more correctly used to describe an engine where the cylinders rotate around a stationary crankshaft and was most commonly used in WWI aircraft.  It should not be confused with the radial engine used later.

The rotary engine fed its spinning cylinders with the air fuel mixture that came from the crankcase in the center.  This made throttling somewhat difficult.  A single carburettor was commonly used and the pilot had to adjust the mixture on the fly.  This meant that in practise the engine was generally run at full throttle and the mixture used to adjust power as a fine tuning control.  For landing the magneto providing spark was temporarily cut out using a "blip" switch creating a sound which some people mistake for an engine in distress.

This lack of control also made starting the engine, whose propeller was bolted directly to the crankcase, a somewhat hazardous affair.  This is also where the term "contact" came from.  Starting was accomplished by a 2 man team. The prop was spun a few times to oil the engine.  Then the pilot would close the blip switch - making contact - so that the magnetos would be active, letting the starter know the engine was live and would fire next time he turned the prop.  The engine would spin up rapidly so the starter needed to be out of the way very quickly.

Wikipedia explains the benefits of this arrangement best:
﻿Notably the large inertia of the engine gave a gyroscopic effect which made control of the aircraft unique:

During level flight the effect was not especially apparent, however under turning it was far more pronounced. Due to the direction of the force left-turns required some degree of effort and happened relatively slowly, combined with a tendency to nose-up, while right-turns were almost instantaneous, with a tendency for the nose to drop. In some aircraft this could be advantageous in situations such as dogfights, while the Sopwith Camel suffered to such an extent that it required left rudder for both left and right turns and could be extremely hazardous if full power was used over the top of a loop at low airspeeds.

So do you fancy flying a plane made of wood and canvas, with no throttle, and a massive whirling gyro in front of you making the plane turn right and nose dive anytime you touch the stick? Yeah that sounds pretty bonkers too.

Next time you start your car I want you to yell "contact" in a mock British accent.
Stay Frivolous.