So project scrap metal is starting to take shape and I figured I'd share some of the progress it's made as it may explain why Ive been selling/buying so many S13 parts lately. Basically this all started when I got bored due to not working on anything, with the Corolla being mostly done and on drift duty I had nothing to wrench on. All my friends recently went out an bought S2000's and I wanted a vert too but couldn't bring my self to sell the suby and get one.  I was determined to get a vert and one day I found this. At first I thought it was going to be a big horse power build but I quickly changed my mind to a cheap, simple and fun build. Something I can drive everyday, enjoy being topless :) and drift it on occasions. So here's where were at. Hit read more for the full story. 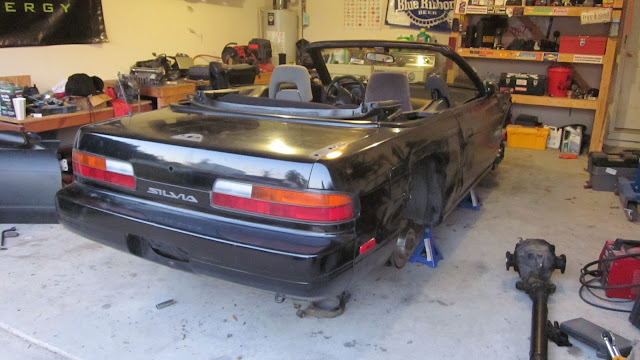 
So here I was with this wrecked 240 with no front and no motor and realizing the lq4 I was thinking about putting in it just wasn't going to happen on my budget and then ...... I found this car. 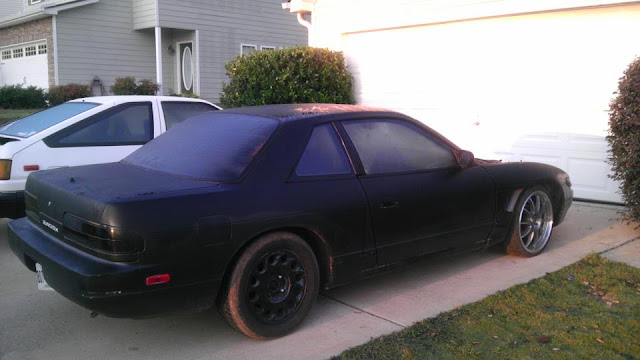 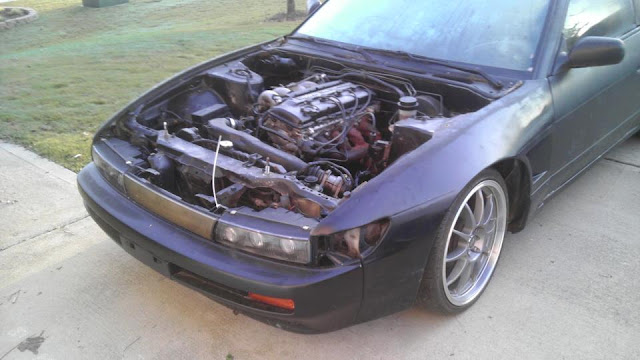 With a Silvia front end and a brand new rebuilt motor for only $1000. Complete with wheels, widebody fenders, decent front, invisible hood, and a pretty clean shell. 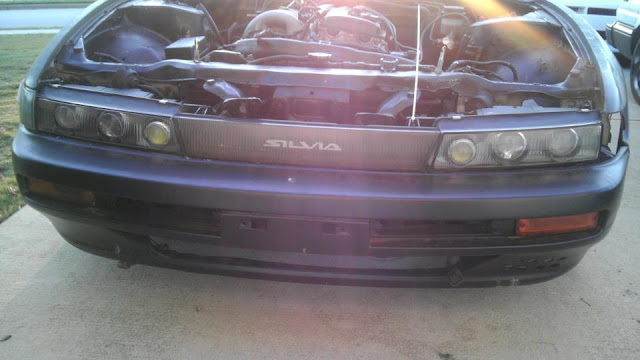 Now I know what you're thinking and no I didn't keep this car, I stripped it. I was building the vert, which has only cost me $200 up to this point, so I cleaned this car of all its goodies. 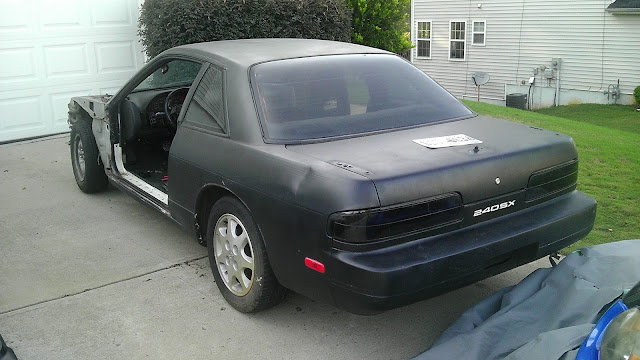 Here is what the poor car looked like when I was done with it. Motor, tranny, sil front, doors, wheels... all gone. I sold the wheels for 250 and a nice young man traded me a set of SSR Long champs for the shell (which i'd say are worth about 750 ebay moneys) so basically got the front and motor/tranny for free. 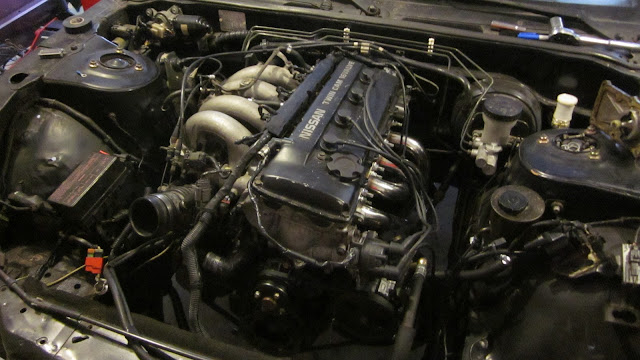 Here's where we are now on the vert. Motor/tranny is in car, completely in with fresh mounts, new clutch etc..The motor was just rebuilt and the vert harness was in good shape so heres hopeing that it starts right up. 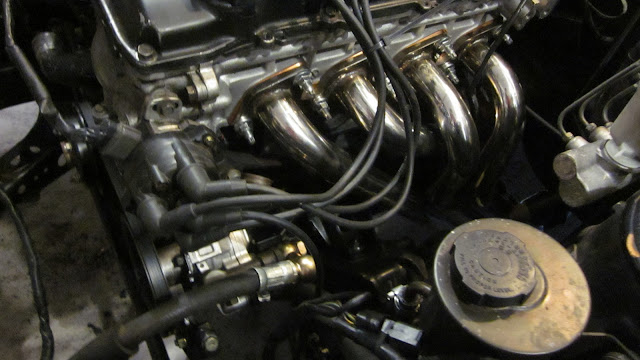 I also stole a decent power steering pump from the junkyard (the donor car didnt have one) and slapped some cheap obx headers on there. and by slapping I mean drilling/filing out all the holes for hours, beating my floor board in to make it fit. also I replaced the exhaust studs becuase the people before me stripped all of them. 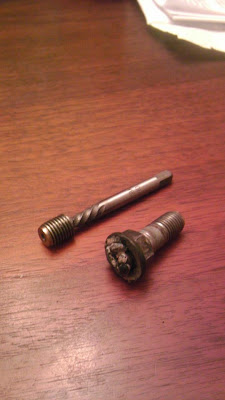 Which took some time to get them all out. lol. 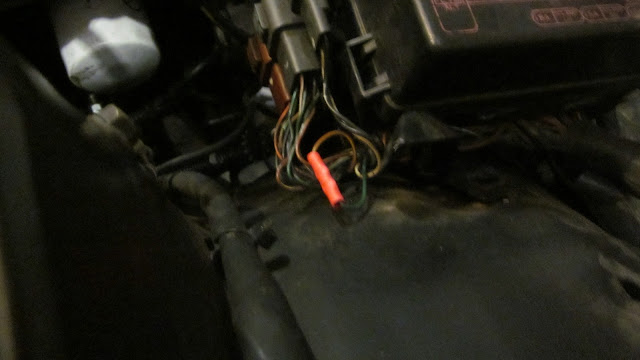 Also got the car all wired up for the auto to manual switch. Yep, the car will run fine just by cutting two wires and connecting them. (at least I hope, and the reverse switch takes a little more wiring).  I took the ecu from the donor car and installed it here, I heard there is no rev limiter on the auto ecu, which wouldn't end well for me. 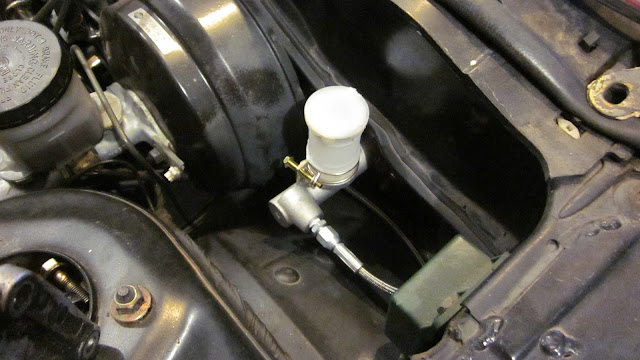 Since the vert was an automatic before, I had to install a master cylinder. Drilling the holes for the clutch master cylinder is somewhat straight forward in a 240, there is already a bracket behind the firewall letting you know just where to drill. I picked up a pedel from the junkyard, cut my pedal down, and installed this nifty clutch line thats a hard/flex line that goes all the way to the slave eliminating the rubber line, pretty cool and simple. Speaking of a five speed, the tranny got all new seals, new slave and boots. 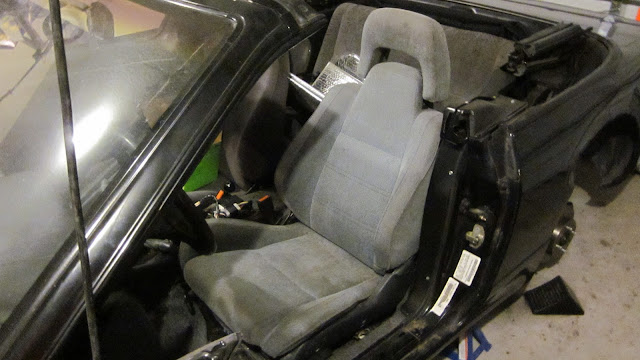 Also I welded in this cool seat I got out of the junk yard, its a 89 Corolla GT-S seat. Not my kind of car but really cool seats. So I took the passenger one home for no reason one day, then when I got this car it was perfect, the tweed matches (lol) and look at those bolsters!. I cut the brackets off both seats and welded the 240 ones onto the rolla rails it worked out pretty good. 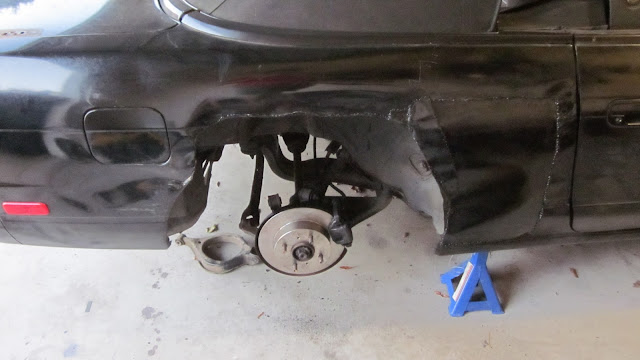 So now moving on to the t-bone damage. I knew from the start that I was putting origin over-fenders on the rear so cosmetics weren't a major thought when welding in a new panel. I just wanted something strong to keep the crap out.  So heres what I did; first I cut out the damaged areas and hammered out what I could. Then I got 1/16 steel sheet, cut to fit and welded it up making sure there isnt a way rain could make its way into the area between the fender and the interior. While I was at it I cut the fender higher and welded them up, giving me the ability to run some really stupid wheels if I wanted to, I'm getting fenders anyways, might as well go nuts. Then threw some paint on then to keep it from rusting.  Also note the brakes are getting new pads and rotors. 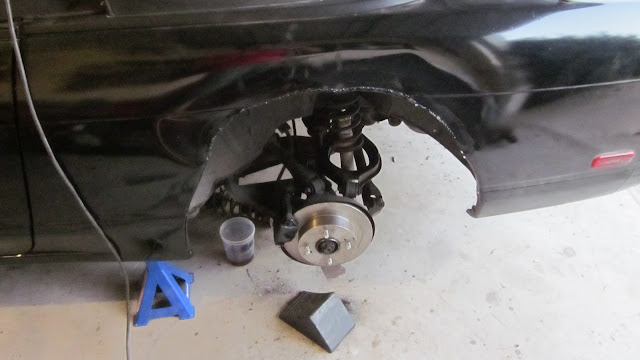 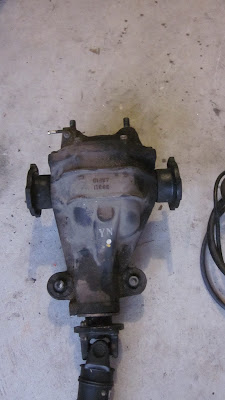 So the next part of the project is this. A 95 J30 VLSD. I went by pull-a-part and took this beast out my self, laying on gravel and only using hand tools, trust me when I say it sucked. But it looks good and it only cost me $80. The 240 non-abs's came with open diffs and theres just no way I could build a 240 with an open diff, it's just not right. So I'll get this guy bolted up, drive shaft in, then fill the diff/tranny/engine with fluids and fire this baby up to see what happens. 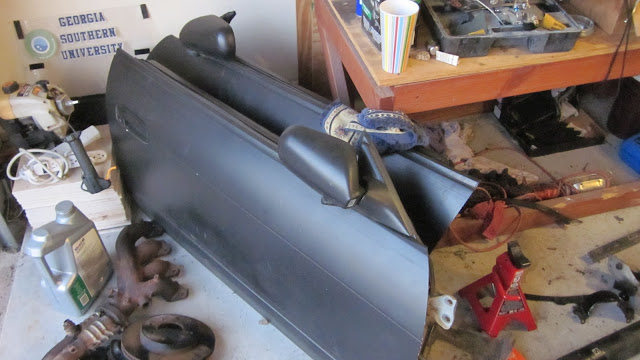 After that it will be the bodys time... the front, all the fenders and bolting up these doors I stole off the donor car. These doors have roll up windows and vert is power, hopefully it wont be too big of a task to swap that out, but these doors are clean, no dents and waayyyy lighter than the stupid vert doors. Also moving the seat belt to a new location since the door will remove the piller where the seat belt bolts up (which I hate, ill be glad to do it).


So Im thinking this will be a pretty sweet little vert when Im done. I never see vert's done in good taste so im excited to see how this comes out. The front is already widebody so it'll match the origin rear i'll put on. I have yet to find a set of good used coilovers or wheels. I havent spent too much on the build yet, I don't want to break that by dropping $2000 on wheels and coils but I can see me spending $1000. We will just have to see what comes my way and if not I've got some really nice 15" meshies around I can use now. I'm hoping to get it done this year, drive it for a bit then once all the kinks are out and I know just how low I can slam it (it will be dropped quite significantly) I will paint it like I did the ae86.  This time black of course. 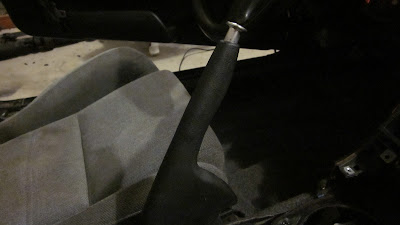 So here's to hoping I'll have a cool daily slider when I'm done. Then I can go back to rolla and hopefully stuff something a little larger under the hood of it and can slide this when the rolla is down. Good plan? We'll find out!!


To see what the car looked like when I got it check Part 1 here.

Thanks for looking!! stay friv.
-ish