I'm going to admit right now that although I have lived in the Greater Atlanta Area for going on 7 years this is the first time Ive made it to the AJC auto show.  There are plenty of other car events in Atlanta and I'm fairly sure this particular one is not the biggest but its probably the closest we get to a grown up Auto show like Detroit or Geneva.  I'm going to stop comparing this to those grown up shows now though because it's not a very big show - more like a collection of local dealerships from major manufacturers... 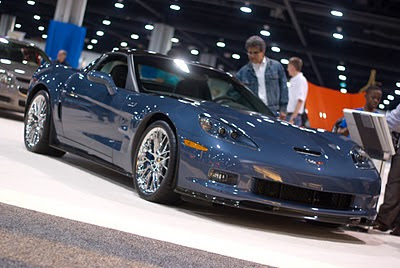 So follow the jump for some photos and some half baked analysis...


The show is held at the Atlanta World Congress Center, and ran from the 23rd to the 27th of March.  If you didn't make it this year you missed it it and will have to cry yourself to sleep until next Spring.

The entry fee for regular Muggles was $10,  $7 if you had a coupon, or Free if you had a generous friend who has cash...  I think it was worth paying for, especially if you really wanted to do some easy comparison shopping of the latest models.  There was not much in the way of food though so we were prepared to go eat somewhere cool like the Vortex in Midtown.

The entrance hallway had a vendor selling some cool toys, flags, signs and car related clutter, apart from some classics on display there wasn't much fanfare. In fact we managed to miss the entrance and went on a short tour of the facility trying to find the way in... 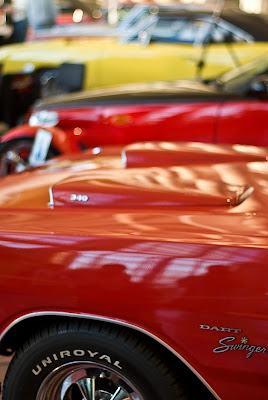 The classics out front were real nice and clean, but nothing you wouldn't see at your local cruise-in.  If you're Winning like me you probably have something like this tucked away in your garage... snooze. 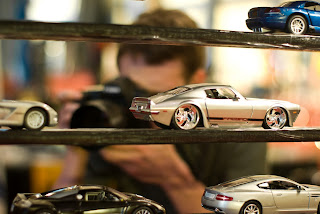 My Co-pilot Julion thought the toy cars were cool, hey dude this isnt what we came here for...
While I'm admitting to screw ups (like 20 minutes of walking around the AWCC trying to find the way in after already staring it in the face) - Julion and I kind of messed up the pikshur taking.  I left home with my 50mm prime,  aaaaaaaaaand so did Julion.  So we don't have any wide angle shots which can be useful for taking pictures of the WHOLE CAR!  you'll have to enjoy the wonderful detail shots instead.
Right inside the entrance is where the big boys hang out.  Ford and Chevy.  They have the most floor space at the show - courtesy of having big dealership CEOs on the board of directors for the show I guess.
Chevy brought a few interesting toys; The Corvette ZR1, the new volt (in full production fashion) and a concept LS7 Camaro. 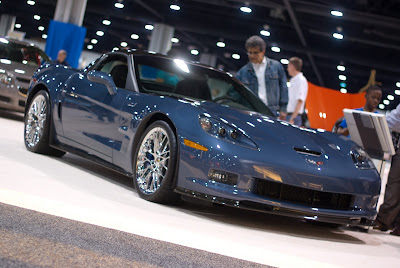 I'm not a huge Corvette nut, but I do like the way it keeps getting better and keeps the expensive supercar set on it's toes.  The ZR1 is a hell of a lot of bang for the buck. 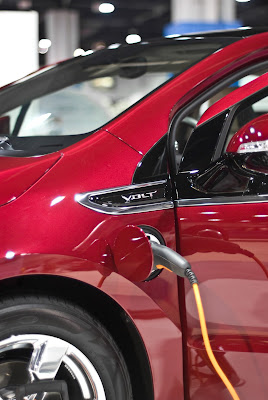 What can I say about the Volt?  You charge it up at home, you drive a few miles, then the little engine cranks up.  It sips fuel but costs an arm, a leg and a government subsidy to buy it.  It is however kicking the hiney of the Nissan Leaf, although success is relative when you're selling cars globally by the dozen.  You can write the rest of that story. 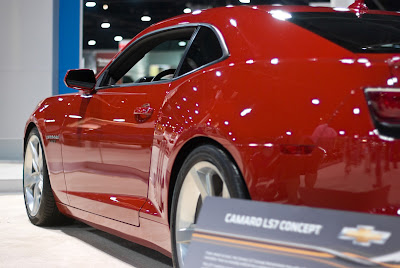 I reckon this thing would be fast if it didn't weigh like a bazillion pounds.
Ford brought the new Fiesta, no exciting WRC display though... I disappoint.  They had a new 5.0 Mustang and a classic mustang pool table (one of my personal favorite exhibits!).  They also had some sort of display robot thing that looked fancy but didn't appear to be any more useful than one of those nodding Christmas reindeer you see in peoples yards. 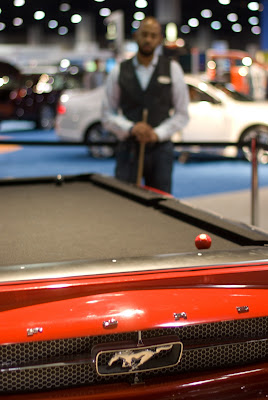 Yeah, I could see myself with one of these, I wanted to stop and play but we had work to do. 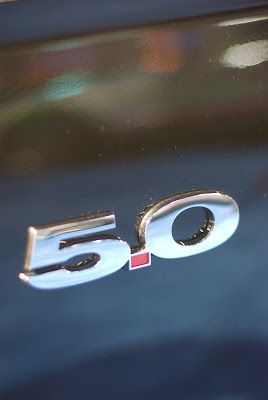 There wasn't much room to take Mustang pictures so I took a picture of its most important feature.  Yeah baby the five-oh is back. 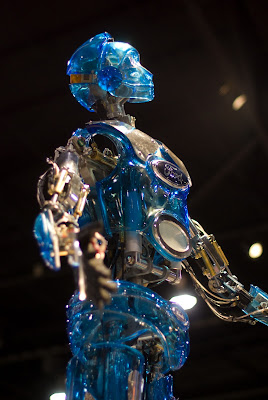 At least make me a sandwich or something...
Dodge did show up but I couldn't find anything worth looking at there.  I mean really did you want me to take some Caravan pictures for you?  Sorry, my camera doesn't have a minivan setting.
Moving on to Lexus, they had some seriously pretty cars on display.  You'll have to excuse my total lack of knowledge on all things Toyota/Lexi related.  I don't think any of this was like earth shattering stuff but I liked the colors... 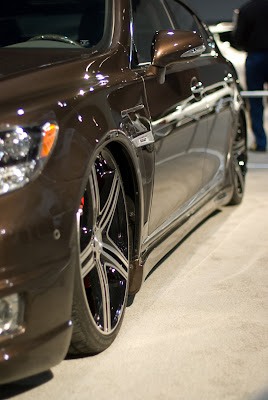 I don't know what this car was, but it was pretty.  You can tell me in the comments, or not... I don't really care.
My personal favorite car of the show was - shock horror - a racing KIA.  Not many companies bothered to bring a race car to the show, so Kudos to Kia, and this car totally looked the business... 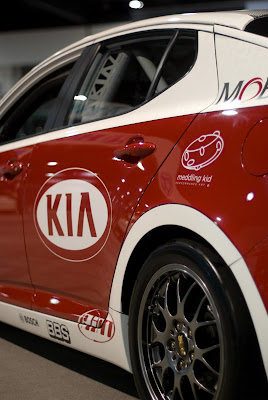 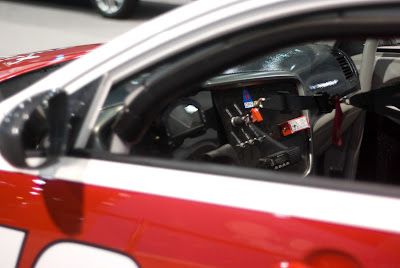 Yep its a race car if it has covered toggle switches 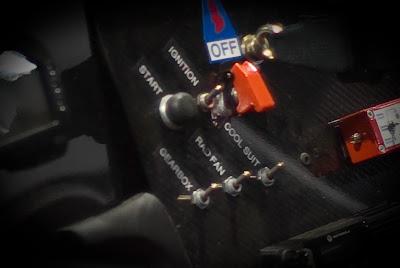 Apparently you drive this thing in a gold speedo and a tuxedo T-shirt because it has a switch just for that...  Yeah today I'm going to wear my cool suit... Julion tried to explain that it was actually some space age air conditioned clothing for race cars but I think we all know he's making that up.
Audi showed up with some A-somethings and S-somethings.  Nice LED headlights and all... 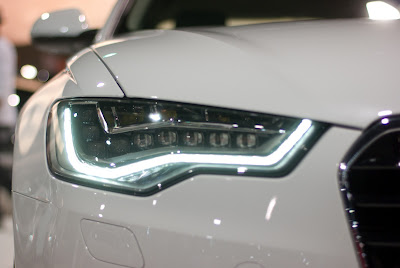 Props to Audi, their German Brothers (or should we say Sisters?) BMW and Mercedes didn't show up.
On to the Sports cars and other wicked cool stuff.  I'm told Lambo's regularly show up, unlike snooty Ferrari.  And Lotus was there with their new overstuffed plus sized model the Evora.  Sitting next to the Elise just made it look even more chubby, poor thing, at least park it next to the Camaro next time...  Aston Martin and Jaguar also brought their cool James Bond worthy metalwork.  Very nice even if they are not really British anymore... 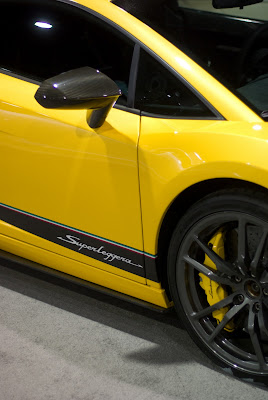 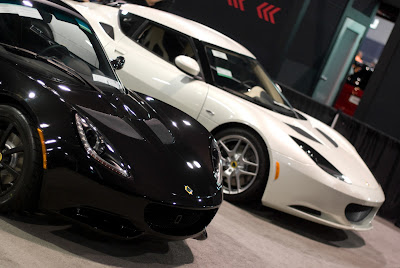 Cute li'l critters aren't they?  Make you wanna take them home and tuck them into bed... You can have the fat one. 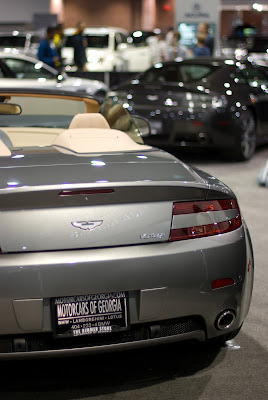 I'm not really sure if I like modern Aston Martins very much.  They are pretty cars, but wow are they expensive.  Those badges must be made of that stuff they were mining in the Avatar movie...
Honda put in a valiant effort.  A new Civic Si, and a CRZ hybrid thing all decked out in custom baubles.  I find it hard to get excited about such things but at least they showed up and brought some unusual toys and not just showroom models... 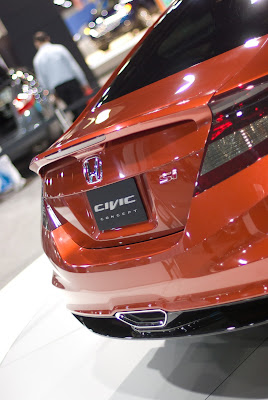 We think that maybe that center exhaust might not make it to production, for some reason designers seem to like the "Anus" look on cars these days. 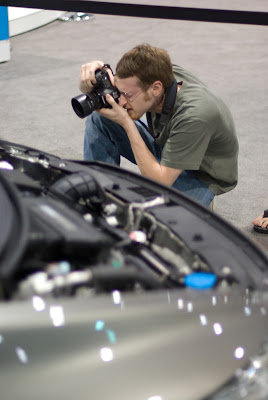 Julion squinting hard to see that tiny engine....  Ha ha just kidding.
Subaru had a nice display although it mostly smelled like the dealership just brought their sales toys, nothing too fancy here.  I did REALLY like the lighting on the white WRX though, you probably noticed that with the wallpaper I posted. 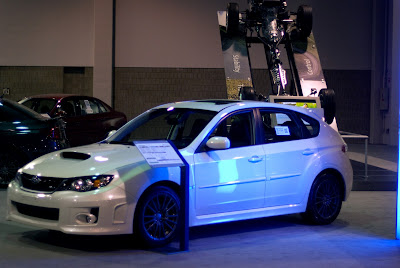 They liked to talk about their AWD system a lot - seen here laid bare on an imprezzive display (see what I did there?)
I was interested to look at the new Mini Countryman.  Its really not very mini at all, 4 doors and Legroom for crying out loud...  Its expensive, and doesn't get very good gas mileage, but I suppose it is somewhat fun looking with available AWD. 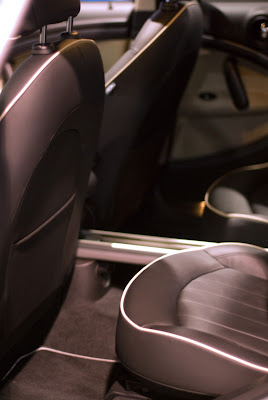 This has so much leg room going on here, how do they get away with still calling it a Mini?
Mazda brought a racing barbie car Miata, they probably had other models too but we didn't notice them.  I'm fairly sure they had an RX-8, but once you've seen one Wankel you've seen them all... 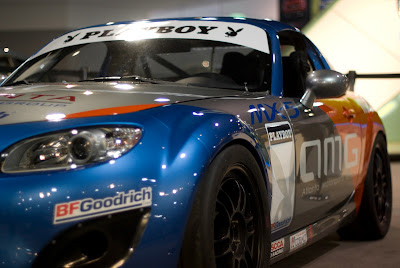 I like that playboy sponsors this car.  Seems fitting to have bunny wunny wabbits on it... 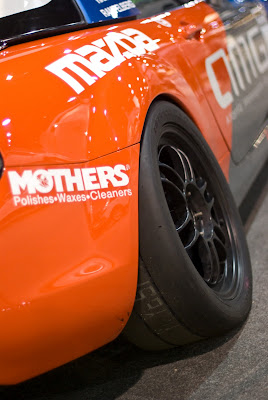 All kidding aside this car was ready to kick ass and mangle some cones in a parking lot somewhere( or the MX-5 Cup)...
I was pleased to see Porsche brought along a few models for us to sit in and play with.  I must admit I do like a 911, not a boxter fan but the 911 gives me that "fuzzy feeling" sometimes. 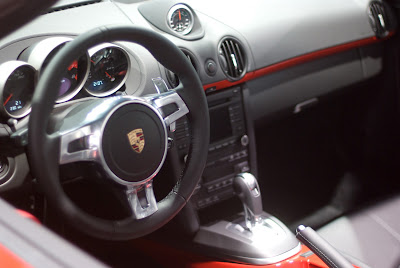 I would have got more pictures but people kept getting in the cars and making "vroom" sounds.  Porsche wasn't shy about letting you in the cars to have a good play. 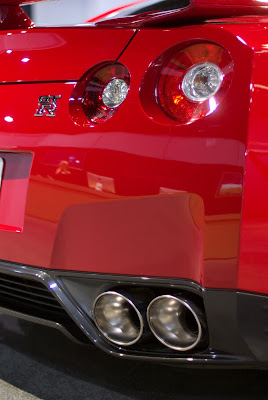 Finally we found Godzilla, shortly before being kicked out at closing time.  Yes they did play "Closing Time" by the Semi-sonics over the audio system - how very witty of them.
As you can tell we had a fun time out, got to see a bunch of hardware up close in one place and can very much recommend it for a fun time out for those with an automotive disposition.  Go on a weekday evening like us for a less impeded view of the cars, and get coupons from the AJC to make the deal even sweeter.
See you there next year
Phil