Other than crumpets and spotted dick what do British people like?  Well among lots of other things they like Mustangs.  No-one really knows why, perhaps its because they cant afford the fuel in the UK?  The only proper thing to do when a Brit finds himself relocated in the land of baseball and apple pie is to get himself a Mustang, with a quickness.  Then he should get some baseball and apple pie. 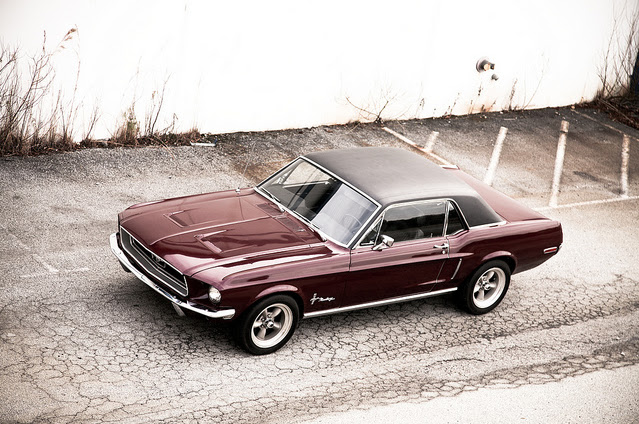 Thats what I did.  I also got a good dental plan and spent a month at the dentist but thats another story.


First of all I ran out and bought the first Mustang I could get my sticky fingers on.  Sadly this was a 2000 model year V6.  In my defence 3.8 liters sounded like a lot to a guy who was used to paying $7 a gallon for fuel and where a 2 liter engine is considered to be a large engine.  After 2 years of wondering why schoolchildren were laughing at me I realized that I needed a mansize car.  Drove to a classic car dealer in Indianapolis and promptly paid way too much for a 1968 mustang.  But hey, it has a V8!

What followed was several years of total bullshit, and a fair bit of crying into my grease stained bloody hands.  On the plus side I aquired a lot of tools.  I fixed it.  Everything.  All of it.  I built a new engine for it too.

Feast your eyes on a few pictures, and then we can take it for a little folly.

I carefully selected only the finest engine components. All of them are Chuck Norris approved and ARP fastened

Then i put them all together, simple really.

This is my car in 1978. A previous owner found out about my project and got in contact with me. He had some photo's and stories to share.

And here is a little video of how she is today, thanks for paying attention - Baller out.